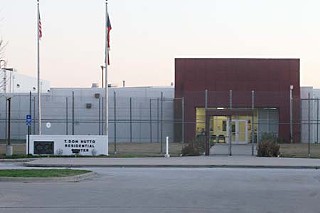 If it quacks like a prison – it's a prison. That's the essential determination of two recent inspections – one conducted by a federal judge and the other by a human rights commission – of T. Don Hutto Residential Center in Taylor, a real prison repurposed in 2006 to incarcerate immigrant families detained by U.S. Immigrations and Customs Enforcement. First spied by neighbors, small children in prison garb surrounded by barbed wire sparked an international uproar. Though conditions have improved since then, this kiddie prison is still no place for a child, according to both sets of inspectors.

In 2007, the American Civil Liberties Union settled with the U.S. Department of Homeland Security and for-profit Correc­tions Corporation of America, which operates Hutto under contract with ICE, to allow judicial oversight of court-ordered improvements until Aug. 29, 2009. (The Williamson County Commissioners Court administers the Hutto contract for a cut of per diem fees.) On June 1, United States Magistrate Judge Andrew W. Austin and other inspectors paid their last visit to Hutto, coming to the general conclusion that "'if it looks like a duck, walks like a duck, and quacks like a duck, it's probably a duck.' The pods at Hutto look, walk, and quack 'jail,'" according to their report filed July 2.

However, the report gives CCA and ICE ample credit for instituting several detainee perks: affordable toiletries for female detainees, customized case documentation replacing "boilerplate" denial letters, and an on-site schoolhouse, among other improvements. The report also lauds Public Health Services staff now on-site, quoting teens describing mental health counseling as "enjoyable and helpful." But the report also quotes a teen who contends counselors "just try to make her laugh and then 'pretend like everything is okay.'"

But everything's apparently not OK. For one thing, during so-called town hall meetings, Hutto staff reportedly lecture detainees instead of establishing dialogue. "This has it backward," the report states. The food is "quite bad." It continues: "The [unseasoned] beans were just plain odd ... with the ratio being about 80:20 pinto to black. Like the potatoes, the rice ... had a strange texture and flavor. ... We found the residents' favorite food [chicken] ... to be dry and not terribly tasty. It makes us wonder what the less-favored food tastes like."

More importantly, according to the report, some officers are abusive. "Many adults stated that [Deportation Officer] Yanoush is just mean," the report offers as an example, adding that one girl lost sleep because Yanoush intimated her family "might be deported in the middle of the night."

In late July, Hutto received a delegation from the Rapporteurship on the Rights of Migrant Workers and Their Families of the Inter-American Commission on Human Rights (under the authority of the Organization of American States) – denied access during the previous administration. According to a report of its preliminary observations, released July 28, the commission concurs that conditions at Hutto have indeed improved but raises the specter they might "deteriorate absent [judicial] monitoring," which ends Aug. 29. Moreover, an IACH inspector told the Chronicle that the group learned from ICE itself that more than 90% of Hutto families are seeking asylum. Such detention practices are "not in compliance with the principle of the 'best interest of the child' to be in the least restrictive environment or with the principles applicable ... under international law," according to the report. A more humane alternative is found in Austin, where asylum seekers "live in a home environment while their cases proceed," the report states.

Due by the end of 2009, the commission's report will be forwarded to the U.S. State Department. See the preliminary report at www.cidh.org.