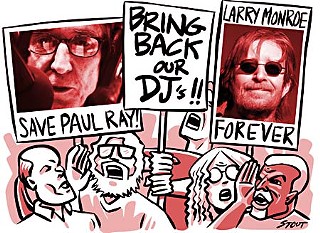 The growing protest against KUT-FM's decision to cut back the shifts of longtime disc jockeys Paul Ray and Larry Monroe is shaping up as something of a last stand for the public radio station's old guard disc jockeys. "They haven't even begun to hear from us," said musician Cleve Hattersley, co-founder of seminal local band Greezy Wheels, who is spearheading the protest. His supporters, who include former Mayor Lee Cooke and 570 Facebook fans, have been calling station board members, staging meetings, and enlisting the support of musicians such as Joe Ely, Marcia Ball, and Toni Price. "We're going to raise such a stink, we're going to get [Ray and Monroe] back," Hattersley said.

But they're battling what station insiders say is a long-running effort to marginalize and push out the station's core group of ol' record spinners, the holdovers from a different era – Monroe, Ray, and morning host John Aielli, in particular – who have been part of KUT for 30 years and remain the station's most recognizable personalities. Although management denies it, their roles have been steadily sliced and diced under general manager Stewart Vanderwilt, who took over KUT in 2000 and began implementing his vision for a modern public radio station.

In the latest moves, last month the station cut the bulk of Monroe and Ray's evening shifts, replacing their shows on Tuesday through Thursday evenings with a music program hosted by Assistant Music Director Matt Reilly, a former disc jockey and producer at Austin adult album alternative station KGSR-FM. Ray will continue with Twine Time on Saturday nights, and Monroe will remain as host of Blue Monday, but they were also dropped from the weeknight overnight slots, replaced by a syndicated show, Undercurrents.

Ray and Monroe, both in their 60s, are now paid for less than 10 hours a week and face the potential loss of their health benefits, according to a station source. In the budget for the station's next fiscal year, set to begin Sept. 1, Aielli is also slotted as a part-time employee, after the station dumped his Web-only program, Aielli Unleashed. (Presumably, he's now back on the leash.)

KUT management cites a variety of reasons for the latest cutbacks, including the need to create "more continuity between our daytime and evening music programming" and a desire to "serve a broader listener base." The audience after midnight is "almost non-existent" and the station is looking to save money, says associate general manager and director of broadcast and content Hawk Mendenhall. Two months ago, Vander­wilt said the station was expecting a 2% increase in revenue this year, but now management is planning for a $550,000 drop in revenue. Cutting Ray and Monroe's shifts will save $60,000 a year, Mendenhall says.

Beyond saving a few bucks, Paul Ray's Jazz show and Monroe's Phil Music Program were simply not drawing the audience numbers, Mendenhall says. "If the shows had been as successful as other music programs," he said, "this wouldn't be an issue."

But that's dangerous ground for the station, which still depends on public contributions from "listeners like you." Longtime fans of Ray, Monroe, Aielli, Jay Trachtenberg, and the station's other unique voices may still hold on to the much-mocked notion that public radio should operate to serve the community, not as a revenue- and ratings-focused corporation. Some insiders believe that only fear of a public relations backlash has stopped management from cutting back the older hosts sooner.

On a small scale, those fears were realized a few days after KUT announced the programming changes, when Ray was named to the Texas Radio Hall of Fame – an embarrassing twist for the station that just cut his shifts. (Oblivious to irony, KUT sent out a press release touting the honor, although it was noticeably free of any congratulatory quotes from station management.)

To get Monroe and Ray back in a featured role, Hattersley is vowing to "go after the money," including the station's donors and local businesses. (Hey, if KLBJ will dump a morning show over some bad "wetback" jokes, why not give it a try?) Beyond the fate of the disc jockeys, he's asking core questions about the role of a public radio station. "The larger issue is the homogenization of something unique to Austin," Hattersley said.

Behind the scenes, tension has been percolating for years between the old guard and management, past and current employees say. Aielli's Eklektikos has been steadily cut and reined in. Some veteran employees took it as a slap in the face when former Market­place host David Brown, who is married to News Director Emily Donahue, was hired and paid $80,000 a year – much more than disc jockeys who had been with the station for decades – and put in charge of a program about Texas music. More recently, Monroe and longtime host Dave Obermann disappeared from the Saturday show Folkways, and former KGSR morning host and ME-TV executive Kevin Connor was added to the show's rotation. (For the record, Connor's slot may be one of the best music shows on local radio, but it has little to do with folk music.)

By all accounts, many of the veteran DJs have clashed with the station's new music culture. Disc jockeys are now told to play certain songs in rotation and are limited on how far they can stray from approved playlists. Songs that "reflect the Central Texas experience" are "hand-picked," the station's promotional materials boast. But most of the high rotation songs are "hand-picked" by a committee, primarily comprised of the station's array of programming and music executives. Aielli, Monroe, and Ray submit and review songs but generally don't participate in the committee, station sources say. (Ray and Monroe both declined to comment.)

Some wonder how long Aielli, who can still be heard most afternoons practicing his vocal techniques in the station's stairwells, will stick around. "We want him to keep doing Eklektikos as long as he wants to keep doing it," Mendenhall said. Some believe he is hanging on out of spite. "Perhaps that's Aielli's greatest revenge," said one former employee, who asked not to be named. "He just won't go away, and he knows that irritates management." (Aielli is on vacation and didn't return phone calls.)

Management's attitude toward the protests supporting Ray and Monroe could be read as dismissive. "The community has not responded by listening to what they're doing," Mendenhall said. Aielli Unleashed, which accounted for half of Aielli's job, generated only 30 downloads on any given day, he says. "When they choose not to listen, they're voting," Mendenhall said.

In a letter posted on the station's website, Vanderwilt couldn't resist twisting the knife, making it clear that Ray and Monroe were not making the grade on the modern KUT. "Unfortunately these weeknight music programs have not kept pace with KUT's or Austin's growth," Vanderwilt wrote. (He also noted the producer of Undercurrents is "one of public radio's top Native American producers," perhaps suggesting that the community should rally around KUT's gallant support of the Native American community.)

Protesters are unlikely to shake Vanderwilt's steely condescension, but they raise questions that the station has a tough time answering. For example, why was KUT able to pay the disc jockeys when it had a $5.5 million budget three years ago, but now it has a $5.9 million budget and can't afford them? Where's the money going? And why hasn't management shown more respect for the station icons, who live and breathe Texas music, when the station is supposedly focusing on Texas music?

Hattersley says the station is underestimating the irritation of KUT's longtime supporters. "Ninety-eight to 99 percent of the people I talk to are really pissed," he said. "Not just put off – pissed."

In other KUT news, Program Director Jody Evans is returning to Vermont after a year on the job. Her husband couldn't find a job in Austin, and they couldn't sell their house in Vermont, says Evans... Turns out 2006 wasn't a great year to go on a radio station buying spree. Border Media Partners, once headed by top Democratic Party fundraiser Tom Castro, gobbled up a string of Texas stations, including KHHL, KBXT, and two others in Austin. Now the company has been taken over by a trustee, and the stations are likely to be sold... The latest round of TV news cutbacks finds local Fox affiliate KTBC-TV eliminating seven positions, including investigative reporter Chris Coffey, producer John Crav­en, and three camera operators. "Investigat­ive reporting will be handled by the rest of the news team," said a station spokesperson, reciting the Orwellian mantra of all TV news operations cutting reporting resources. "We're still very committed to investigative reporting."