What's Next for the ARA?

As the longtime director departs and an audit looms, does the Eastside nonprofit have a future? 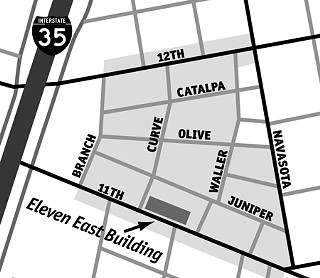 Controversy has dogged the Austin Revitalization Authority from the moment it was born.

That was probably inevitable, considering its official father was then-City Council Mem­ber (1994-97) Eric Mitchell. Seemingly, the entirety of Mitchell's single term was dogged by headline controversy. Mitchell was known for abrasiveness, developed a most impolitic habit of literally saying "screw you" to his critics, was criticized for shady-looking financial dealings, and, when crossed, was extremely quick to claim racism. When voters ousted him in 1997, he bowed out characteristically by declaring that "I pulled a sheet off of Austin, Texas" and called his replacement on the dais a "house nigger."

And that style provides some context for the creation of the ARA back in 1996. Mitchell got the nonprofit development company up and running with city money to clean up and bring back to life the East 11th Street and East 12th Street corridors, once the bustling hub of Austin's African-American community. A laudable goal, but unfortunately, the ARA quickly acquired the appearance of Mitchell's personal fiefdom, its board stacked with his personal appointees, none of whom were residents of the neighborhood.

An ARA sign announces a work in progress near East 11th Street. (Photo by Jana Birchum)

After much outside political pressure and infighting, the board was finally restructured to bring in more neighborhood input. But today, many seats reserved on the board for particular area neighborhoods and constituencies remain unfilled, some out of protest against the organization's actions. Thirteen years in, the ARA has its supporters but plenty of detractors, too – not only for its at best uneven community relations but also for a rather thin list of accomplishments.

With this history in the rearview mirror, ARA now stands at a crossroads. Last month, ARA President Byron Marshall announced he was leaving to become chief administrative officer for the city of Richmond, Va. His departure neatly coincides with the completion of a city audit of the ARA, scheduled to come before the City Council's Audit & Finance Committee as early as Aug. 25. ARA board member the Rev. Sterling Lands said the agency hasn't yet considered a replacement for Mar­shall. In the interim, Greg Smith, formerly project manager of the city's Neighborhood Housing and Community Development Department, will direct the organization.

The ARA office on Navasota Street (Photo by Jana Birchum)

That confluence of events raises some questions about the future direction of the ARA – and even whether the organization is still needed at all.

"I think that we were successful in beginning to change the perception of East Austin and to have private investors see it as a place where they could safely invest their money, which is what I'm charged with," said Marshall from his office in late July, asked to reflect on his decadelong (longer, if you count some years as interim director) tenure with the ARA.

"I think the record has some pluses and minuses to it," he went on. "We were not as successful on 12th Street as we would have liked to have been. I think 11th Street has gone relatively well, and the spin-off effect for the neighborhoods along Seventh Street, I think, is also a testament to the fact that people now see this as an area to invest in.

"Another downside would be the effect of gentrification. That's a much more broad policy issue that has to be addressed at the government level, the state and local government level. Nonprofit organizations can't really effectively address that. We attempted to do it with some programs: building affordable housing, providing low rates to small business to locate in an area. But the wider issue has to do with property taxes and how they can be abated or reduced to take into account the impact of appreciating property values on small businesses and people on fixed incomes." 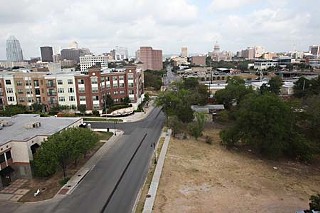 Marshall also noted that crime dropped off precipitously along the ARA section of 11th Street during the past decade, from 289 crimes in 1998 to between 34 and 88 per year thereafter. "In the beginning, this area was totally slum and blight," says City Council Member Sheryl Cole, who sits in the Place 6 seat once occupied by Mitchell. "The ARA was set up to turn that situation around. And I don't think they get enough credit for having done that, Byron included.

"Now, the circumstances have changed. It is no longer slum and blight, there are viable businesses along the corridor, and the price of the housing has escalated. So now, the neighborhoods want less height and more affordable housing. And that kind of conflicts with the original business model. And so the question for the new director is how do you carry the future development forward and appease the neighbors and make it profitable and comply with the will of the board?" 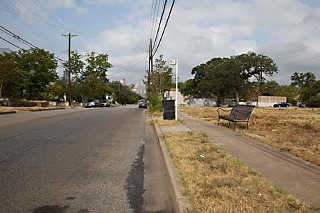 The ARA has been slow to revitalize East 12th Street. (Photo by Jana Birchum)

By contrast, Mark Rogers is much less generous than Cole in assessing the overall effects of the ARA and Marshall's work. "It's not a total failure," Rogers says.

Rogers has been an antagonist of the ARA pretty much all along. He has long been an officer with the Guadalupe Association for an Improved Neighborhood, representing the blocks to the south of the ARA's jurisdiction, and he has served as the project director of the Guadalupe Neighborhood Development Cor­por­ation, another nonprofit working on affordable housing and refurbishing properties in the area. Two of the vacant ARA board seats are reserved for GAIN and GNDC.

"It's not a totally dark, grim picture," Rogers says. "There were some things done, and that probably helped other things happen. But all in all, what was done seems to be out of scale and out of the price range and difficult for what we'd hoped would be the local businesses and local people to benefit from. Not that much has happened – one big building and one big remodel."

How to Move Forward?

The "big building" is Eleven East, a mixed-use building on 11th that includes a restaurant on the first floor and offices above – with the anchor office tenant being the city of Austin's Neighborhood Housing and Community Development Department (according to the ARA, current occupancy of the building is 93%). The "one big remodel" is the Haehnel Building, best known for once housing Shorty's Bar. "That building was the bane of our existence," Rogers says, grateful for its current incarnation as home of Balcones Recycling. "It was vacant and being used by crackheads and prostitutes, and the city owned it, and nothing was getting done."

Beyond that, what else has the city gotten for the $250,000 per year it has provided to the ARA? As even Marshall has conceded, 12th Street is the weak sister in the equation. A recent perusal of the street confirms: 12th still looks pretty much the same as it did more than 15 years ago, before the ARA's creation. One has to wonder why there is a virtual stalemate, when just a few blocks to the south, East Fifth and Sixth – neighborhoods that had challenges not unlike that of 11th and 12th – are now stuffed with high-rise condos, mixed-use development, and a vital retail business scene.

"I think [the ARA] has outlived its usefulness," says Rogers bluntly. "It was interesting to think back to 1998, '99, and there was a question of whether ARA should be killed now or should we try to make it work. The consensus came down on 'let's try to make it work.' ... I look back – hindsight's 20/20 – I think it should have been killed and revised as a new entity, more of a neighborhood planning advisory group, kind of what happened at Mueller or Saltillo." 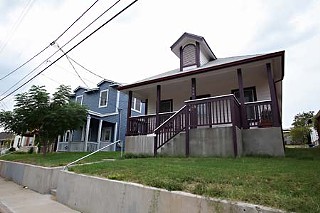 These ARA restored houses add vitality to the neighborhood. (Photo by Jana Birchum)

As Rogers notes, the city can't directly kill the company now, as it's a private nonprofit that owns properties and collects rental income. However, he says, "It should have been at this point in time a really self-sustaining, healthy organization. City Council could easily save $250,000 a year by not paying salaries. They should, with a little bit of belt-tightening, be able to survive very well." (Of course, the city can decide whether to continue awarding development contracts to ARA and whether to keep or kill existing ones.)

"Most organizations don't get anything close to that kind of operating support," says Rogers. The Guadalupe Neighborhood Development Cor­por­ation "has an average of $19,000 to $20,000 a year in support, and we just produced a $6.2 million multifamily apartment, numerous single-family houses in that same time period, and we've got a 90-unit project under way – and we have a staff of two. ARA has a staff of four to seven at any given time."

Smith is still getting up to speed on his new responsibilities, but asked about Rogers' claims, Lands said that it's not a fair, apples-to-apples comparison. The GNDC is in the business of affordable housing, he said, while the ARA "is not in the housing business – our job is revitalizing the corridor for business.

"We don't build for the money," Lands said. He also claimed that "dollar for dollar, square foot for square foot, we've built more for less" than GNDC. 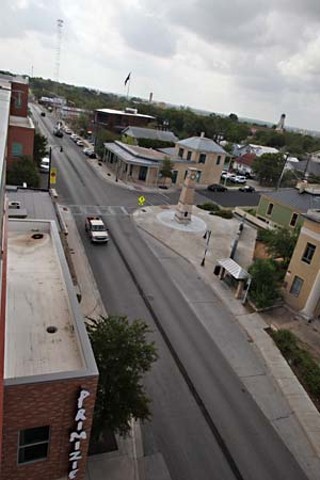 Asked if ARA could survive without the annual quarter million from the city, Lands said, "I sure hope not. We're partners with the city. We're doing this for the city. We have no interest in pursuing this on our own."

Presumably, questions of whether ARA should still get funding and contracts will be raised when the City Council finally gets its hands on the forthcoming audit.

"I don't think it's been the most effective agency," says City Council Member Bill Spel­man, who sits on the Audit & Finance Com­mit­tee. Spelman has had plenty of time to watch the ARA – although he just took his current council seat after winning election in May, he previously served on the council from 1997 to 2000, immediately after Mitchell and in the ARA's early days. "I don't really know what [the audit staff] are going to suggest, but I'm very much looking forward to it. It has been an agency that has needed some help for quite a while. ... You're dealing with an authority that has not been real efficient." 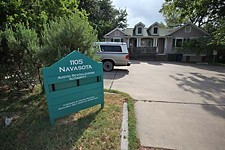