Neighbors and Fruit Trees; and Some Peace of Mine?

Some years ago, a young, sorta hippyish couple knocked on my front door. They had noticed that I had fig trees in the yard, laden with summer fruit. If I wasn't going to pick them all, they asked, could they harvest some figs? Since I was about to take a trip, I said, "Sure, have at 'em."

Upon my return, as I stood at the door fumbling for my keys, I looked down, and there were two jars of delicious fig jam awaiting me.

A little common neighborliness can be deeply enriching – in so many ways.

I remembered my happy fig exchange recently when I read that a fast-growing, underground fruit economy is spreading in cities across America. Well, the movement is underground, but, naturally, the fruit is above ground and – like my figs – in plain sight. "Urban fruit foraging," it's called. It's being organized spontaneously by local folks who look around their neighborhoods and see yards with trees bearing an abundance of apples, plums, oranges, pomegranates, and other delights – an abundance that largely goes unpicked.

So, why not find ways to gather, distribute, and eat this public fruit? Cleverly, people are doing just that. In Oregon, for example, the Portland Fruit Tree Project is a database of 300 trees for picking. The owners sign up, then alert foragers a couple of weeks before the fruit ripens so a harvest can be scheduled. Noting that one can only eat so many apples, one of the projects organizers says, "A fruit tree is really made for sharing with your neighborhood."

Others share with food banks or form backyard fruit co-ops or put citywide maps of available fruit online, or ... well, come up with your own idea. To help guide you, here are a few websites: www.fallenfruit.org, www.forageoakland.blogspot.com, www.neighborhoodfruit.com, and www.veggietrader.com.

Some Peace of Mine?

Having wandered without hope in the arid desert of George W.'s environmental policies for the past eight years, even small signs of a shift in the policy winds are as welcome as a long drink of cool water.

In recent days, three signs of change wafted over us – all involving mining. The first was the two-year moratorium that Secretary of the Interior Ken Salazar imposed on new uranium mines adjacent to the Grand Canyon. Yes, the Bushites had opened this sacred national treasure to profiteering corporations eager to sink thousands of uranium mine shafts into the area's public lands. Salazar's move can lead to a permanent ban on such desecration.

Second, the winds are shifting on the 1872 mining law that lets corporations dig into our public land for gold, copper, and other valuables. They extract huge profits for themselves, but – get this – they pay no royalties to us for the treasures they take, nor do they have to pay for cleaning up the poisonous mess they leave behind! At last, the Obamacans are moving the reform of this absurd bit of corporate welfare to the top tier of their legislative agenda.

Third, the despicable mining technique known as "mountaintop removal," used by thuggish coal giants operating in Appalachia, has drawn opposition from a Republican senator. Lamar Alexander of Tennessee has signed on as co-sponsor of a bill to ban this mining method, which is destroying the beautiful, ancient mountains and pristine streams of the Appalachian area. In retaliation, a few mining outfits are trying to bully Alexander by boycotting corporate travel to Tennessee. Undaunted, Alexander replied that tourists come to his state "to see our scenic mountains whose tops have not been blown off."

Okay, we're certainly not out of the desert yet, but these small signs suggest a good direction for us. 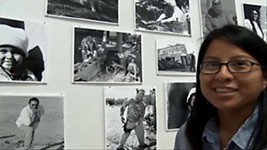