• Repurposing Pearce With the new academic year looming, Austin ISD plans to unveil a new repurposing proposal for Pearce Middle School by the end of this week, according to district communications director Andy Welch. While no details are yet available, the district has confirmed that it hopes to reopen the East Austin campus for the 2009-10 academic year. AISD staff have been working with the Texas Education Agency on a proposal that they hope will address the concerns expressed by Education Commissioner Robert Scott about the earlier Refine­ment and Realignment Plan submitted by the district. When completed, the proposal will be formally presented to the board of trustees at a special meeting on Aug. 3. If they give it the nod, Welch said, the proposal "will be forwarded, almost immediately, to Commissioner Scott" for his approval. The timing will leave little room for the board and the community to comment on a proposal that needs to be in place before new teacher orientation begins on Aug. 10. – Richard Whittaker

• Carstarphen's Cabinet With the new school year looming, AISD Superintendent Meria Carstarphen has used internal hires to fill two of the three vacant positions in her restructured cabinet. Paul Cruz, associate superintendent for middle schools, takes over the new post of chief schools officer, while Maria Montoya-Hohenstein (currently interim associate superintendent for AISD's north elementary schools) becomes associate superintendent for elementary schools. Carstarphen went outside of the district for her chief financial officer pick, Nicole Conley-Abram, who is currently the deputy chief financial officer for Atlanta Public Schools. Education Austin President Louis Malfaro particularly praised the selection of Cruz, saying, "I'm glad that position has gone to someone within the district," and noting that, out of all the superintendents, and as a veteran of the fight to save Webb Mid­dle School, Cruz has the best grasp of the need to bring communities onto campus. The appointments are scheduled for confirmation votes at the AISD board meeting Aug. 3. – R.W. 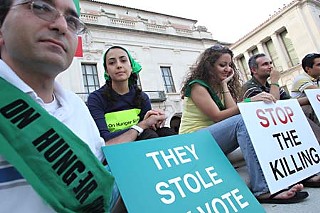 Supporters of those involved in protests of recent election results in Iran, which have led to the arrests of hundreds of activists claiming electoral fraud, staged a hunger strike last week on the south steps of the UT Tower. The demonstration lasted three days as part of similar strikes across the U.S. (Photo by Jana Birchum)

• Plight of texas Kids A new report shows that Texas children were facing increased hardship before the current economic collapse. The annual Kids Count Data Book, compiled by the Annie E. Casey Foundation from multiple sources, indicates that from 2000 to 2007, Texas lagged behind the national average in several indicators of childhood success, such as median family income (41st in the nation) and percentage of children under 17 with health insurance coverage (50th). While there have been improvements in some areas, including teen death rates and high school attrition, Texas has seen negative trends year-on-year in others, with low birth-weight rates rising since 2000, along with the number of children in families receiving food stamps. See the full report at datacenter.kidscount.org. – R.W.

Tim Austin (r) and an unidentified woman debate the pros and cons of President Obama’s health-care reform proposal at a July 25 rally at the Downtown office of the AFL-CIO. See “Health-Care Showdown.” (Photo by Jana Birchum)

• Up, Up, and Unemployed Unemployment continues to rise in Texas, and the state is struggling to pay all the benefits. The Texas Workforce Commission has released statistics for June showing the jobless rate stands at 8% statewide (the seasonally adjusted figure is 7.5%) and at 7.1% in Austin. Although still well behind the national figure of 9.7%, both state and local jobless rates rose far faster from May than the national figure (0.6 percentage points in the U.S., 0.9 percentage points in Austin, and a massive 1.1 percentage points in Texas). The commission has implemented a 13-week benefit-extension program to cover the long-term unemployed. But Gov. Rick Perry is still being criticized for rejecting federal stimulus money for modernizing the benefits system to cover these costs and instead using a federal loan. Rep. Jim Dunnam, D-Waco, called it hypocrisy, since the interest-free loan is still "part of the stimulus bill that Governor Perry says he detests so much." – R.W.