Plenty of work to do 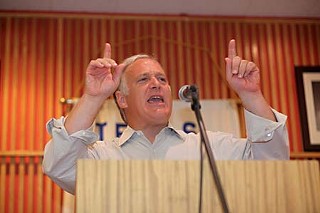 "I'm supposed to be dead already."

But Austin state senator and cancer survivor Kirk Watson pointed out the obvious – he's not. The reason, he told Democrats and other health-care reform supporters gathered at the AFL-CIO Hall on Saturday, is that after his first fight with cancer, "on a routine CAT scan – by the way, the word 'routine' is real important – they found another tumor, and I had some major surgery for that."

The battle for national health-care coverage is on. President Barack Obama began the metaphorical D-day invasion with a prime-time press conference last week, and Saturday's event was one of many held around the nation by Dems to press the fight forward.

The rally apparently went better than Travis County Dems expected, because it brought an overflow crowd that eventually drew the attention of the city fire marshal. Your intrepid reporter never even made it inside the building and had to listen to the rally on a speaker set up outside. Predictably, the event also drew a smaller crowd of right-wing "tea-partiers" in counterprotest. Stationed across the street from the hall, they held signs including such thoughtful messages as "Obama Marxist Traitor."

The star of the health-care rally was one of the local Democrats who may actually get to vote on the bill, Congressman Lloyd Doggett, D-Austin. Having a Democratic Congress and president are not enough to guarantee passage of the bill, he warned, because of "hundreds of lobbyists and millions of dollars being spent about this issue and a steady diet of misinformation on hate radio and cable television. We have our work cut out for us. ... We need your active involvement.

"Health care has to be a right for everyone in this country. This is not something we go to the store to buy," Ann Kitchen, executive director of Integrated Care Collaboration, tells the crowd. (Photo by Jana Birchum)

"The amount of misinformation out there is incredible," Doggett said. While meeting with constituents earlier in the day, he said, a woman with a cane came up to him worrying about the prospect of a "government takeover" – the bill before Congress is for a public option plan, not a takeover of the nation's health-care system – "but she appreciated what I'd done for her Medicare.

"What does she think Medicare is? People [are] claiming that there is going to be euthanasia if we have this plan. They've heard one crazy bit of comment after another." (Indeed, one of the tea-partiers' signs made such a claim.) Doggett read a letter from an Austin artist whose uninsured, ill sister finally killed herself. "If she had been a citizen of any other industrialized nation," the letter read, "she'd very likely be alive today."

(The rest of Austin's congressional delegation, all Republicans, oppose the current bill. "The non-partisan Congressional Budget Office says it makes health care more expensive and will add almost $240 billion to our deficit," said Congressman Michael McCaul, quoted in the Brenham Banner-Press. "The rest is paid for by raising taxes on families and small businesses that can't afford it in a difficult economy.")

Another moving bit of real-world testimony came from Austinite Ed Scruggs, whose 22-month-old daughter suffers from neurofibromatosis, a genetic disorder that causes tumors and can lead to other severe problems. Scruggs' family does have insurance, but "part of this is just not that you can't get coverage but that you're stuck with terrible coverage and the costs are so high.

"Early on the doctor warned us that, as an adult, it is almost certain that Katie will never have private health insurance of her own due to preexisting conditions," Scruggs said. "In February, an MRI revealed the presence of two brain tumors interwoven in the optic nerves leading back to the center of the brain. We believe these are benign, but they are growing, and they are inoperable. The only treatment available to her is long-term chemotherapy, which could last up to two years.

"We're overjoyed to have this time with her," Scruggs said as his voice cracked, "but the hardest part that keeps my wife and I up at night is the unknown. ... Will one of us need to leave our job? We just don't know. What we do know is we have paid thousands of dollars out of pocket for MRIs every three to four months, genetic testing, office visits. And there's no end in sight. This will continue indefinitely, so the long-term future is something we don't talk much about at our house.

"There's simply no room for error. One layoff, one minor accident, or God forbid someone else in the house gets sick, it will break us. ... Just when you think you've paid the bill, another one comes. And then another and another. And then the collection calls start, some for bills you swear you've never seen before. There are days when you don't want to check the mailbox or answer the phone."

"Another of the arguments I heard this morning and I saw on the signs across the street concerns 'rationing' of health care," Doggett said. "What do you think we have right now? In 2006, 22,000 people died because they didn't have health insurance. They got rationed right out of their life and sustenance."