Tell the Dems to create a real public plan

The latest outrage percolating through the right-wing noise machine – in rotation on the Fox network and its blogosphere kin – is Barack Obama's supposed insult to doctors when he said, "The doctor may look at the reimbursement system and say to himself: 'You know what? I make a lot more money if I take this kid's tonsils out.'" This utter commonplace about the "fee-for-service" system that distorts so much of our health care sent the pundits in search of enraged otolaryngologists (and spell-checkers) who would never, never, ever, ever make a treatment decision based on the relative fees involved. (Those of you who have never, ever been prescribed a pointless diagnostic test, put your hands down now.) These are, of course, the same guys who insist the government shouldn't get involved in health care because it would unfairly restrict the income of doctors.

Reporters of Saturday's counterprotest against the health-care-reform rally Downtown were delighted to quote an anesthesiologist claiming the only reason medical costs keep soaring is doctors' fear of lawsuits and that the answer is (cue the corporate chorus) "tort reform." Some reporter with a memory might have thought to ask, "Didn't that train leave the Capitol station a couple of legislative sessions ago?" Indeed, if the Lege passes any more tort deform, it might as well lock up the civil courts altogether. Aren't these the same folks who keep insisting there's no need to regulate health care (or the financial markets or pharmaceuticals or [name your industry] ...), because that's what the courts are for?

When they aren't denouncing "socialism" (that is, health-care systems in which risks and expenses are shared, more commonly known as "insurance"), opponents of any changes to the current U.S. system (otherwise known as "the weakest go to the wall") are insisting that we simply can't afford universal health care, especially during a recession (although they were hardly beating the drum for reform when times were good). For a couple of reasons, this is the most preposterous claim of all: 1) Every other industrialized democracy affords universal coverage, more efficiently and with generally better health outcomes; and 2) a political class that has spent most of the last decade pouring countless billions into two spectacularly wasteful wars simply can no longer claim there isn't enough money for health care for all the country's citizens.

At the Chronicle, we have decent health-care insurance, although like all small businesses, the company gets whipsawed annually by rising rates and changing coverages. (For more on that subject, consult the report just released by the Texas Public Interest Research Group's Larry McNeely, "The Small Business Dilemma.") And just because we're insured doesn't mean we're covered. Right now I'm embroiled in an amusing and frustrating (and expensive) argument with our Enormous Insurance Co. over coverage of recent treatments for a limited but potentially serious condition. An EIC rep first told me (over the phone) that the treatments would cost me only my negligible co-pays. After several weeks of successful therapy, EIC then began denying the claims – on the grounds the treatments took place in a clinic within a hospital and therefore would not be covered, as they would have been if the exact same treatments occurred at a clinic in its own building. (Never mind the reassuring phone call – as far as EIC is concerned, that never happened.) Call it the brick-and-mortar exception – a shell game now costing me several hundred dollars in unanticipated expenses, as well as billing headaches for the doctor and therapists, and now my own reluctance to pursue any follow-up treatment I might need.

As I wrote to the folks at EIC, I'm sure glad I don't live in one of those countries with socialized medicine, where some bureaucrat would be rationing my medical treatments and standing between me and my physician.

I tell this story with no sense of special exception, rather as the ordinary experience of accessing health care in America. There are plenty of people who have endured much worse. As Congressman Lloyd Doggett points out (see "Health-Care Showdown"), last year roughly 22,000 Americans were rationed out of their lives by lack of health insurance.

Virtually every family can tell a similar tale, so it's no wonder a large majority of Americans says it wants major health-care reform, importantly including a public option (like Medicare) or, even better, a universal single-payer system (Medicare for all). The latter isn't even under serious consideration (for political reasons, not medical ones), and the insurance lobby (ably assisted by the cable blowhards) is doing its expensive best to block the former – for the very good reason that they know they would have to cut costs to compete with a public plan.

Until last November, I had pretty much concluded that there would be no rational health-care system in the U.S. in my lifetime. Now, writing in Texas, where a quarter of the population has no health insurance, I wish I could be optimistic that a serious public plan will survive the congressional labyrinth. If it fails again, we won't be able to blame the Republicans; they no longer have the votes. Instead, some 52 "Blue Dog" House Demo­crats (and their counterparts in the Senate) – who call themselves "moderates" but are heavily in hock to the insurance and pharmaceutical lobbies – are doing what they can to weaken or eliminate the public option.

If they succeed in obstructing the process and gutting the public plan, whatever survives – a rejuggling of current insurance options – will be cosmetic, hardly worth doing, or worse. Right now, the intransigent Blue Dogs form the main obstacle to a decent reform plan coming to the House floor, where it would have a fighting chance of eventually meeting a Senate counterpart and becoming law.

Among Texas Dems, only Laredo's Henry Cuellar calls himself a Blue Dog, but that doesn't mean Texas voters should be quiet about what Congress should do. The Blue Dog communications director, Kristen Hawn, receives e-mail at bluedog@mail.house.gov.

I suggest every Chronicle reader who has his or her own insurance tale to tell – in other words, everyone within the sound of my keyboard – send a (polite) note to the Blue Dogs via Ms. Hawn, add your own story if you like, and tell them that we want real universal health-care coverage, with a public option to compete with the private insurance companies – and we're not falling for the phony argument that "it costs too much." It's the current irrational and brutal anti-health-care system that costs too much, in money and human lives, and we've all had quite enough. 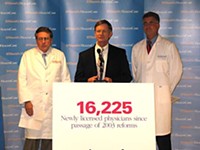