The 2009 AISD budget balances the books, but the financial future's not bright 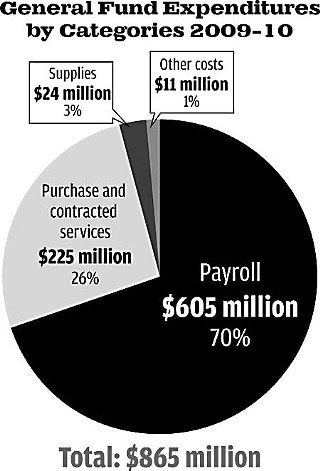 By comparison to most local government agencies in this recessionary year, the Austin Inde­pendent School District's coffers are in reasonable shape. But with the board of trustees scheduled to approve the budget for the 2009-10 academic year before classes start on Aug. 24, the district is trying to bolster itself against predictions of lean years to come.

This will be interim Chief Financial Officer Steve West's only budget for the district (the board is expected to confirm the selection of his permanent replacement, Nicole Conley-Abram, the current deputy chief financial officer for Atlanta Public Schools, at its Aug. 3 meeting). When he presented the budget's outline to the board on June 15, he proposed General Fund expenditures of $865 million for the year. That's down from the 2008-09 spending of $892 million, with savings of $31 million coming via the ending of one-time payments. Even so, the district anticipates only $843 million in revenue, meaning a $22 million dip into its fund balance to cover the shortfall.

The long-term picture may even be bleaker than proposed in June, so when he returns to the board Aug. 3, West will present what he called "a scrub-down of the budget," using the recently published MGT of America efficiency study (see "AISD 'Efficiency' Study: Not Exactly What the Doctor Ordered?" June 12) and the district's own analysis to cut nonacademic costs. He hopes to find another $10 million to $13 million in savings – reducing the deficit but not erasing it. His target is to leave the fund balance in August 2010 closer to $100 million than $90 million, keeping cash reserves high for future spending. West added, "I predict that, for the next several years, we're going to be faced with limited resources and continued pressure on growth of spending."

These figures, of course, are only predictions. In previous years, the approved budget has underestimated both revenue and expenditures, and the fear this year is that costs may rise while tax revenue falls. In addition, the district faces a whole new slate of one-time costs – the closure and potential repurposing of Pearce Middle School, the continued repurposing of Eastside Memorial (formerly Johnston High), and the state-ordered introduction of privately contracted teaching and training at Reagan High – the eventual total costs of which all remain unclear.

For board President Mark Williams, the trick remains doing more with the same. "We're not raising tax rates, so whatever we do is going to be out of what we have or out of fund balance," he said, adding that even if the district did return to voters for a tax increase, most of the additional revenue would go to the state under recapture (aka "Robin Hood"). As for cutting costs, Williams warns that's tough. "Schools are different to other entities, where you say, 'How much money do you have, and what do we not do?'" he said. "We don't get a break on the accountability system where we can say, 'We're just not going to spend as much money on science this next year,' or, 'We're not going to transport the kids.'" Nor does he see the more discretionary programs, like libraries or athletics, as eligible for the chopping block. "For hundreds, if not thousands, of kids that's what keeps them connected," he said.

But – neither is free money. Indeed, West points out that most of it is already allocated for educational mandates, like student/teacher staffing levels and an $800 pay raise for teachers, librarians, counselors, nurses, and speech pathologists. Senior fiscal analyst at the Center for Public Policy Priorities Dick Lavine warns against seeing HB 3646 as a panacea: "What the Legislature did was stop schools falling further behind and added roughly enough money to keep up with enrollment and inflation." He's equally frustrated that school districts aren't getting all the stimulus money that D.C. lawmakers originally approved. On July 24, the U.S. Department of Educa­tion approved the Texas plan for spending $3.2 billion in school-related stimulus money. That means an extra $12 million for AISD (half of which will go straight to the $800 pay raise). Of the remainder, Congressman Lloyd Dog­gett has attacked the state's apportionment as yet another example of stimulus funds used instead to bail out the state budget.

When the education stimulus was first discussed in Congress, Doggett said, he was assured that the cash would go straight to the districts for any project they needed, from pay raises to construction. Instead, the Legis­lature created artificial budget cuts and filled them with federal money, which "totally negates any stimulative effect." For example, the cost of replacing textbooks normally comes out of the Permanent School Fund, but because that fund is underperforming, rather than using the state's untapped Rainy Day Fund, the Lege allocated more than $1 billion in stimulus cash for new books. "Had these funds been distributed directly to local school districts, as Congress intended, AISD would have received $78 million in additional funding," Doggett noted.

The general revenue fund balance isn't the only cash reserve that the district must tap this year. A new proposal (suggested by the MGT study) would transfer Child Nutrition Program administration costs from general revenue to the food services budget, thereby spending $1 million from the $7 million Food Service Fund balance, essentially a Peter-to-Paul exchange.

That's peanuts compared to the Debt Ser­vice Fund. Since revenue from the "interest and sinking" portion of property taxes will likely stay static this year while bond obligations rise, West proposes taking half of the $22 million Debt Service Fund reserve to cover an estimated $11 million shortfall in debt repayments. He warns that, with no federal stimulus or state education finance reform likely in the near future, an unpopular tax rate increase is almost inevitable within the next two years.

So even should AISD survive this year with minimal deficit spending, that may not be so easy next year or afterward. When it comes to sustaining education beyond the 2009-10 school year, Lavine voiced his concern for all public schools: "Everything is just postponed, and sooner or later we are going to come face-to-face with the fact that we don't have a revenue system that's adequate."

When the Austin Independent School District board of trustees starts debating the budget, Education Austin President Louis Malfaro says, "I don't expect a whole lot of fireworks." Yet he still hopes to convince the district to use its fund balance more aggressively, going down to a bond-market-acceptable reserve of $80 million rather than the $100 million the district is considering. The extra money, he says, could boost the proposed 3% teacher pay raise to 5%, extend that raise to all support staff, and supplement professional development. Malfaro has long been a critic of AISD's timid approach to the fund balance, and he blames the district's bookkeeping methodology. He asked interim Chief Financial Officer Steve West if his office has any way to track spending throughout the year, instead of waiting for the annual audit due in December. "The answer was no," Malfaro says. Former CFO Larry Throm "was really good at eyeballing where we were going to be. When he was wrong, it was always to the good, so we never came up short." Generally, Throm underestimated the final fund balance by around $10 million a year – which is what Malfaro wants the district to spend. "We're just asking for the margin of error that we've seen year-on-year," he says. "If we want to keep good teachers, we've got to be able to compete on salaries, and we're not."