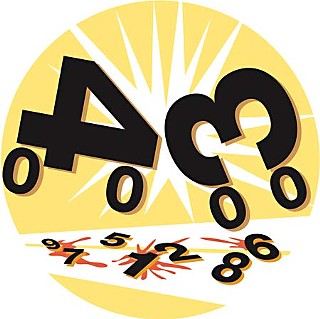 Considering the 2010 city budget process began months ago, back in May, it's hard for a jaundiced City Hall observer not to meet City Manager Marc Ott's final proposed budget with any more than an anticlimactic shrug. Austin's sales tax woes – down almost 10% since January – have been out in the open all year. The "unprecedented transparency" that Ott's touted for this budget is undeniable – especially in comparison to recent years past. And several of the most controversial proposed cuts, vetted and inoculated over the course of five town hall meetings, were mercifully sidestepped.

But that's just one opinion. In writing about the city's finances, I'm continually reminded of the parable of the blind men and the elephant, in which each man touches a different part of the same whole – tusk, tail, trunk, leg – and therefore delivers a radically different description. The entire $2.75 billion city enterprise is so large, and encompasses so much, that any single view can only hope to skim the surface.

What we've tried to do is summarize the budget in broad strokes, note which services and programs made the cut and which didn't, and the overall effects on both your pocketbook and city services. But as the budget is still a proposal at this point, numbers are in flux and will likely change again before final adoption.

The last stage in the process is City Council review and adoption, and as council directly crunches the numbers for the next month and a half, it'll consider a lot of intertwining factors. Here are a few it'll spend a little extra time on.

For starters, there's the property tax rate, proposed at 43.28 cents. That's the "rollback rate" – the highest the city can go without calling a special election and roughly an 8% increase over last year. Mayor Lee Leffingwell says he wants to consider lowering the rate – a gambit that might benefit him politically in the short-term but would likely harm the city in the long run. Lowering the rate might get the daily's editorial board off his back – although somewhat surprisingly, Sunday's Statesman nodded in favor of the proposed rate. True to form, the editors then complained that the proposed budget imposes "double taxation" via user fees – although they didn't suggest how else to fill the remaining budget gap if the fees are canceled. On the whole, that's somewhat less helpful than the citizen volunteers who showed up at public forums to suggest ways to balance income and expenditures – including the judicious increase of some fees.

The simple truth is that a lower tax rate would only make it that much tougher for Austin to dig itself out of next year's likely budget crunch, while undercutting Ott's claims that the budget represents structural, sustainable changes that should have long-lasting impact. And forgoing the fee increases, without simultaneously raising the tax rate even higher, sends the whole process back to the drawing board.

On the subject of expenses, public safety salaries remain structural (and probably unsustainable) cost-drivers. For instance, forgoing police and EMS raises this year (admirably volunteered by the unions) saved $4.7 million, almost a sixth of the city's nearly $30 million shortfall (after the tax hike). But the agreement inked between the city and the unions, while forgoing raises this year (in exchange for, among other things, a 300-hour boost to police sick-day payouts), calls for 3% pay raises in both 2011 and 2012. The city budgeters either believe they can meet the rising cost or were simply kicking the can farther down the road – in any event, public safety costs will continue to dominate budget discussion. While it's a volatile subject, the city might want to take a good, long look at the police meet-and-confer contract and assess whether its benefits (largely, access to case files by civilian members of the Police Oversight Board) outweigh the tremendous financial cost.

As for the city's civilian employees, in the current economy, salary freezes and fewer bonuses are better than layoffs. And so far, judging from council's initial reaction, a proposed furlough program looks dead in the water. But the complaints of the local chapter of the American Federation of State, County and Municipal Employees take on added relevance when you consider not only the previous sacrifices of the city work force but the byzantine accounting and cash reserves throughout the entire $2.75 billion budget, which dwarfs the General Fund: a $40 million emergency fund (large by historical standards), the $21.4 million budget stabilization fund (a creation of recent years), and revenues from city-owned utilities Austin Energy and the Austin Water Utility – the latter so taboo a topic that Ott felt even a mention by council members was inappropriate on the eve of the city's meeting with its bond rating company. (It's worth recalling that bond rating is an industry that had more than a little involvement in our global financial unraveling – with all its current municipal reverberations.)

Those are the broad budgetary outlines, to be fleshed out further in departmental presentations over the next several weeks.

And now: describing the elephant.

Instead of layoffs or pay cuts, the city realizes its greatest personnel savings by eliminating 105 jobs that have been budgeted but aren't currently staffed. Public safety responder (sworn Police, Fire, and EMS) positions are not affected.

• Transfers out and more (Jobs transferred between departments, plus 23 positions trimmed from the city's IT department and Fleet Services): 41.5 positions, $3.3 million savings.

While escaping many of the more severe cuts floated by the city, the General Fund departments are still making sacrifices.

• Parks & Recreation ($2 million): PARD saves a pretty penny – $1.3 million – by shifting some relevant parks costs to Anderson Mill, which voted to create its own tax assessment district for park upkeep. Slashing unfilled positions and closing seven pools make up most of the remaining savings.

• Police ($1.5 million): Staffing changes have cut overtime costs here, while a few cost-saving reclassifications and charging South by Southwest for security services (should they be necessary) free up more money.

• EMS ($1 million): Overtime and commodities and training costs are reduced, and empty support positions are eliminated.

• Fire ($0.3 million): Five support positions are redeployed to front-line firefighting, and an administrative position is axed.

• Library ($0.7 million): Again, vacancies have been deep-sixed, while the library cuts back not on "core services" but on presumed peripherals: for instance, $69,000 in funding for electronic databases and periodicals.

City of Austin employees have escaped direct layoffs, but the city is tightening its belt further – moves that, following recently lowered raises and a canceled market-adjustment study, have city union leaders grousing about the sacrifices they've made already. The city manager's proposed furlough plan – unpaid time off for employees – was met coolly by council, casting its implementation into doubt.

• No civilian pay increases: After stepping raises down last year from a maximum 4% to 2.5%, the city has canceled raises altogether this year.

• Suspension of service incentive pay: This program essentially pays bonuses tied to an employee's time with the city; the longer he or she has been there, the more he or she receives. Cutting it saves $1.7 million in the General Fund, $5.9 million citywide.

• Market-based salary adjustment canceled: The city was planning to implement a study of salaries in the private sector and adjust its own salaries accordingly, but this too has been shelved.

• Unpaid furloughs: Will save $0.7 million in the General Fund, $3.4 million citywide.

Although it receives transfers from revenue-generating enterprise departments such as Austin Energy, the GF also makes transfers out. They'll be reduced this year. 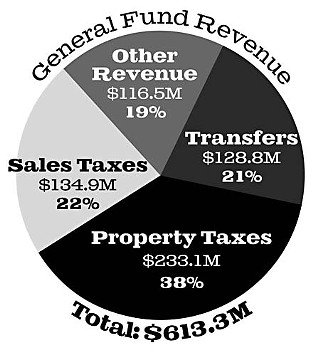 • Libraries: To the delight of bibliophiles (and families), the Central Library and its branches made it through relatively unscathed. Current Library hours will remain in place, as will the system's annual books budget of $1.9 million. However, seven unfilled Library positions are among those cut.

• Parks: Several unpopular cuts to Parks & Recreation programs are off the (picnic) table. Among them: funding for certain youth sports programs that (literally) keeps the lights on ($200,000), a supervised children's play program at 11 locations ($110,000), and pool swimming hours ($70,000). But the proposal to close seven older pools is in the final budget.

Where's the Money Coming From?

• Property tax: Tentatively set at the rollback rate of 43.28 cents, property tax accounts for $233.1 million, or 38% of the $613.3 million General Fund. Mayor Leffingwell says he'll be looking to see if it can be lowered. The increase comes to about $6 a month for a median-priced home, valued around $190,000.

• Other fees: The city is becoming increasingly creative in sussing out streams of alternate funding.

• Increased development fees: The city has raised fees to more accurately reflect the costs of development. Bumping construction inspection fees to a flat $75 (down from the originally proposed $125) brings in $100,000, commercial building plan review fees bring in $100,000, and increased traffic impact analysis fees pull in $18,750.

• Transportation user fee: This fee, bundled on your city utility bill, pays for road upkeep. Council had already approved a $1.14 increase, but the proposed budget adds another 52 cents, for a $1.66 increase.

• Parking fines: Paying your parking tickets off early is a little bit less of a deal. By raising the early-payment cost from $15 to $20, the municipal court brings in about $270,000 extra.

• Trail of Lights: A $5 entrance fee to the Zilker Park holiday tradition is expected to bring in about $250,000.

Did All Those Budget Town Halls Have an Impact?

The city says yes – 14 of the 32 cuts citizens were asked to consider made it into the proposed budget. We've listed the proposals, numbered by their priority rankings.

5) Security service waivers (i.e., additional APD overtime) for South by Southwest Festival. The city will stop paying for the additional police presence in the overflow Downtown streets during SXSW. Savings: $120,000.

14) Close South Austin day-labor site permanently. This secondary site, which had far less traffic than the original at 51st and I-35, was already temporarily shuttered. Savings: $205,700.

What's With All These Transfers?

Austin Energy transfers $100 million to the General Fund, at a council-capped transfer rate of 9.1% of gross revenues.

The Austin Water Utility transfers in $29 million, at a 8.2% transfer rate.