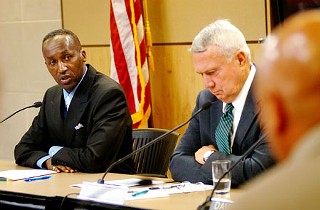 City Manager Marc Ott (l) lays out the proposed 2010 budget Wednesday, as Mayor Lee Leffingwell listens to a plan that would spare public safety and library hours from cuts and increase a number of fees – although mandatory employee furloughs appear to be off the table for now. For details, see "City Budget." (Photo by John Anderson)

• FIREFIGHTER FILES DISCRIMINATION COMPLAINT Austin's only black female firefighter, Nona Allen, has filed an official complaint with the Austin Fire Department alleging that a fellow firefighter came up behind her and pushed her forward as she was walking toward a fire truck. According to Allen's attorney, Will Sutton, the other firefighter allegedly yelled at Allen to run toward the truck, and when she didn't, he instead pushed her from behind. The complaint is pending. Austin African-American Firefighters Associa­tion President Bobby Johns said in a press release that the alleged behavior is unacceptable: "Please join us in helping to keep [AFD] accountable to making sure these types of actions do not occur to any of its members," Johns wrote, "and that corrective action takes place to appropriately address them." Allen also has a discrimination lawsuit pending against AFD; she claims she has received unequal treatment because she's a woman – she was denied accommodations equal to those of her male counterparts and was treated unfairly by male colleagues, including then Assistant Chief Jim Evans, when she tried to remedy the disparity. Sutton says witness depositions continue this week – including that of Evans – and that he expects the city will soon file a motion for summary judgment. "That will be hotly contested," he said. – Jordan Smith

• IT'S YOUR CITY, TOO Austinites interested in serving on the Citizens Advisory Committee for the Comprehensive Plan have a few more weeks to find a nominating council member. Delayed until Aug. 6, the staff briefing on the committee to City Council will include recommendations for its role, makeup for broad-based representation, and size (probably 14 to 25 members). CAC appointments could follow at council on Aug. 20, although Mayor Lee Leffingwell has predicted they won't get finalized until September. Similarly, new boards and commissions members are lining up. Council members each nominate one per board; final appointments are voted on by council as a whole (and some horse-trading does occur). They'll begin at council this Thursday, July 23, and continue into August and September. "While there is no deadline for people to submit applications for consideration, the sooner the better," said B&C coordinator Candy Parham Hinkle. (See www.cityofaustin.org/cityclerk/b_overview.htm or contact Hinkle at candy.parham@ci.austin.tx.us.) Of special interest: the all-new Waterfront Planning Advisory Board. Council members are actively scouting for potential Waterfront Planning members "from the fields of urban design, environmental protection, architecture, landscape architecture, historic preservation, shoreline ecology, neighborhood conservation, civic art, and real property development." – Katherine Gregor

• EVAN SMITH'S NEW GIG "It's really all about me," says Evan Smith, explaining why after almost 18 years he is leaving Texas Monthly to helm a new media venture. Cutbacks at the magazine, forced by parent company Emmis Communications, "played no role," said Smith, who was promoted to president last year. "It's all about where I am and the fact that I've been doing this for a long time, and I'm ready to do something else." That "something else" is the Texas Tribune, a nonpartisan, nonprofit, public issues journalism organization founded by Austin Ventures general partner John Thornton. Smith has been consulting with Thornton for the past year to help develop the project, which will "promote civic engagement and discourse on public policy, politics, government, and other matters of statewide interest," according to a press release. Initial hires include KVUE reporter Elise Hu, former Houston Chronicle reporter Matt Stiles, and Emily Ramshaw of The Dallas Morning News. Texas Tribune is expected to formally launch later this year and plans to host events to help spur dialogue and revenue. Smith will continue to serve as editor emeritus of Texas Monthly, which will allow him to continue hosting Texas Monthly Talks on KLRU. – Kevin Brass