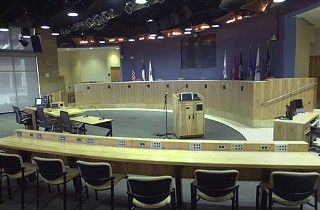 • City Council returns from summer break today (Thursday), with an agenda bursting at the seams. For a breakdown, see "City Hall Hustle."

• Barton Springs Pool has sprung a leak! Actually, about a dozen leaks, in the bypass culvert that directs Barton Creek water around the pool. Repairs will cost the city at least a couple million and can't begin until drought-reduced spring flow rises sufficiently to protect the endangered salamanders living above the pool in Eliza Springs.

• Austin enviros mobilize: Environmentalists showed up at the Electric Utility Commission meeting Monday and encouraged Austin Energy to consider a zero-coal option among its energy generation plans through 2020; meanwhile, expect an update at City Council today (Thursday) on the results of the Eco-Change Exchange, an attempt to distill the disparate visions of more than 40 different enviro groups into one short list of eco-priorities for the city.

• Austin ISD continues to work on ways to "repurpose" Pearce Middle School, after state Education Commissioner Robert Scott ordered its closure over low standardized test scores. It remains uncertain whether district officials can devise a plan acceptable to Scott in time for the fall term, which begins Aug. 24.

• Austin Police are investigating the shooting deaths of two UT graduates in West Campus. The victims, Stacy Barnett (l) and John Goosey, were found Tuesday in their apartment at 904 W. 21st.

• Emmis Radio Austin canceled the weekday morning KLBJ-AM Todd & Don Show in the wake of widespread community protest over co-host Don Pryor's use of the ethnic slur "wetback" in the July 14 show. Pryor later apologized and claimed he was joking, but Emmis VP Scott Gillmore first suspended the two broadcasters, then canceled the show and reassigned the hosts. See "Point Austin."

"[T]hese preliminary options have significant implications for costs, pool operations, and risk to the endangered salamander population. [They] could take 6-8 months to complete and would close Barton Springs for swimming."