Can Austin Avoid the Stigma of Dirty Air?

Tweet
print
write a letter
The Clean Air Force of Central Texas is making what it calls the "Big Push" to keep the five counties of the Austin area in compliance with federal clean air standards. But it won't be easy: Under the formula used by the Environmental Protection Agency for determining compliance, if Austin goes over the legal limit of ozone for an eight-hour average just twice more this ozone season (summertime, basically), we will be in "nonattainment" of the standard.

To make things even more dicey, the EPA lowered the standard from 85 parts per billion to 76 ppb last year. Austin's ozone levels have dropped off slightly since 1980, but even then they were barely under the old standard and above the new one.

"We are on the cusp," says Deanna Alten­hoff, executive director of the Clean Air Force, a nonprofit devoted to coordinating air-quality planning and education. Altenhoff says it already has governmental and business partners helping out, but now wants to reach the general public. "We are hoping we can make a difference if everyone does their part.

"It's critical because we have this new ozone standard," Altenhoff said recently at a media gathering. Nonattainment "is a stigma that the Clean Air Force has been trying to avoid for 16 years now."

It could be a costly one: An array of federal sanctions comes down on areas that reach nonattainment, including a loss of highway funds. "Reducing emissions is essential to maintaining both healthy citizens and a desirable business atmosphere," Altenhoff said. "Our main message is to drive less. We don't want any more delays in our transportation funding whatsoever. We don't want to have to go through more hoops with our businesses – businesses that might have manufacturing processes, from paint shops to semiconductor businesses that might have more emissions controls equipment required that they don't now, that might create more costs for consumers." And ultimately, the EPA requirement is "a health-based standard. More than a third of the population in Travis County is dealing with some sort of respiratory ailment." (Of course, as local blogger and transportation gadfly Mike Dahmus argues, building new highways could simply further encourage driving and make it even harder to control ozone, although one could also counter that smoother-flowing traffic reduces emissions.)

Altenhoff offered some tips for keeping the ozone down: Use public transportation (hey, when's the train coming?), bike, walk, carpool, stagger work shifts to avoid rush hours, avoid idling (skip the drive-through and walk on in), and delay mowing, pumping gas, and using electricity (within reason, obviously) until after 6pm. 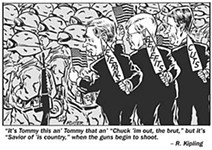