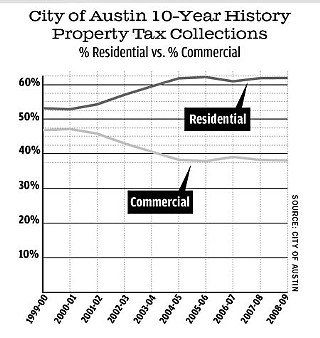 Travis County officials have vowed to unravel a "historic and systematic" trend of homeowners shouldering the greater share of the local property-tax load while commercial landowners are paying significantly less than the market value of their parcels, according to a study released this week.

The independent study, titled "The Unfair Burden," draws on published reports, public documents, and other information obtained through open records to illustrate stark differences between the assessed values of commercial and residential properties. Local activist Brian Rodgers compiled the report, to be unveiled at a noon rally today (Thursday, July 16) in front of the Travis Central Appraisal District, 8314 Cross Park.

Rodgers is a real estate investor and developer who is no stranger to lightning-rod issues. Last year he financed an unsuccessful ballot referendum that would have formally ended city subsidies for retail projects, specifically the Domain development in North Austin. On the issue of property taxes, he is finding a more receptive audience, at a time when the county and its 80 taxing entities are squeezing their budgets to make ends meet. (The county collects property taxes on behalf of all the local jurisdictions.) County Commissioner Sarah Eckhardt was among the first to pick up the phone and express her concerns to chief appraiser Patrick Brown. "These are some pretty big disparities," Eckhardt said of the study's results, which contain 30 examples of "the systemic gross undervaluation" of commercial properties and speculative land – land that is purchased on the theory that it will someday turn a profit.

Rodgers had hoped the county would either challenge TCAD or ask the Texas comptroller to audit the district's records, but County Judge Sam Biscoe – one of the most unflappable of local elected officials – said this week he'd prefer to begin addressing the problem by inviting the chief appraiser to the next commissioners' meeting, July 21. Biscoe's position had shifted slightly from last week, when he was leaning toward filing a formal challenge with TCAD, while Eckhardt, noting she would ultimately defer to Biscoe, was angling to take the matter straight to the comptroller's office.

"Filing a challenge would be a bit premature," Biscoe said, adding that after talking the matter over with the county attorney's office, he'd prefer to begin with a public discussion on the issue and give Brown an opportunity to respond to Rodgers' report. 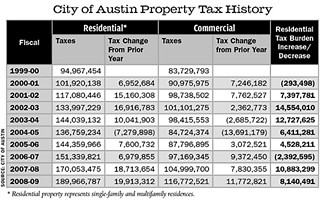 Texas relies heavily on property taxes to pay for public schools, which are historically underfunded. Property taxes (along with more volatile sales taxes) also serve as the financial backbone of city and county services, paying for such bread-and-butter necessities as road maintenance, trash pickup, and public safety. Moreover, property taxes provide the funding for the appraisal district, and Biscoe said he's inclined to ask the city and Austin Independent School District – the two largest taxing entities in the county – to join the county in springing for some extra dollars to pay for additional TCAD staff.

"It seems to me we need to put together a strategy to close the gap," Biscoe said, acknowledging that Brown, who assumed the chief appraiser post in January 2008, isn't necessarily responsible for creating the gap. "If [Brown] inherited a problem, I think he has a duty to fix it," Biscoe said.

City and large urban counties across the state are continuously grappling with disparities in commercial and residential property values. Officials in Dallas and San Antonio have in past years lobbied to change state laws that would force the disclosure of all property sales, but efforts to make inroads at the Legislature have been regularly stymied by monied opposition from the real estate industry. At least three such bills were introduced in the last legislative session, including one filed by state Sen. Jeff Wentworth, R-San Antonio, whose district includes parts of Travis County. As in past years, the bills were opposed by commercial property associations, including the Real Estate Council of Austin. "The real estate trade organizations who drive the mythology that a larger tax base benefits us all and who are cheering and driving Austin's population growth went down to the Legislature this session and stopped [the disclosure legislation]," Rodgers said.

The lack of an adequate reporting system for property sales makes the jobs of appraisal districts all the more difficult, said TCAD's Brown, noting that Texas is one of only a few states without mandatory sales disclosure laws. "Obviously, the more data that we obtain, the better our appraisal roll will be," Brown wrote in an e-mail response to the Chronicle. But he says he's not convinced that a "gap" actually exists between commercial and residential values. The appraiser took issue with some aspects of Rodgers' report, which included a city of Austin chart showing that residential property taxes increased from 53% of total annual property taxes in 1999-2000 to 62% in 2008-2009. (See charts, above.) "Much of the evidence used to support this 'gap' shows the percentage increases in various categories. Keep in mind that real estate is a local market, and is based on supply and demand," he said. "An over-supply of offices, for instance, will depress office values, while families may still be moving into the county, continuing to drive up residential values. There is no long-term correlation between percentage increases in commercial and residential properties. There is also new value to consider. Much of the increase in our overall roll is based on new construction being added. Again," he added, "if a sector is getting overbuilt, we may be adding a lot of new value in a year when appreciation rates may be fairly low."

Rodgers, on the other hand, draws on his own experience in real estate to argue that commercial property owners enjoy a certain amount of tax breaks, even if they're not intentional. "It's a well-known secret that commercial properties generally don't pay their fair share," he said, adding that proposed city budget cuts that involve closing swimming pools and cutting services to senior citizens should serve as a wake-up call to those not paying their share (although the current city cutbacks are more directly a consequence of falling sales tax receipts). But Biscoe cautions that increases in commercial property taxes wouldn't necessarily translate to fatter and healthier budgets. "It would mean that homeowners would pay less in taxes," he said, "and commercial property owners would pay more."

Nevertheless, Rodgers argues, every property owner should pay their fair share. "Those of us in the commercial real estate industry make plenty of money and can pay our taxes, too," he said.

The report, "The Unfair Burden," can be found at www.costofgrowth.com. 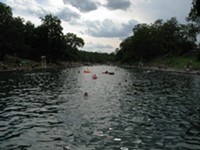 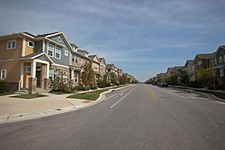