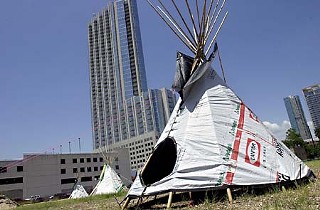 An assembly of tepees in Republic Square Park makes for an interesting study against a backdrop of condos. The two-day installation, which ended Tuesday, was part of a touring Polymorphic Plastic Parade, featuring tepees made of salvaged and renewable resources. Next stop: Marfa. (Photo by John Anderson)

• SO LONG, MARSHALL It's official: After a rocky decade as the president of the Austin Revitalization Authority – a nonprofit contracted by the city to redevelop East 11th and 12th streets – Byron Marshall is leaving to become chief administrative officer of Richmond, Va. The Richmond City Council approved his hiring on a 9-0 vote. Marshall came under heavy criticism from many residents in those Eastside corridors for being slow to respond to their needs, creating overpriced office space, and taking too long to get projects finished. The ARA is now being audited by the city of Austin; results are due in August. – Lee Nichols

• COMPREHENSIVE COMPADRES Revving up for the city's comprehensive planning process is a new group-of-groups, the Austin Urban Coalition. Charter members include the Alliance for Public Transportation, the American Institute of Architects-Austin, Congress for the New Urbanism-Central Texas, and U.S. Green Build­ing Council-Central Texas. Other organizations and community leaders have attended the two monthly meetings held to date and are expected to join AUC. Spokesman Jeb Boyt said, "We are working together to promote affordability, mobility, sustainable use of our natural resources, and vibrant urban life for all of Austin," as the comprehensive plan moves forward. "We are pledged to implementation of the Envision Central Texas Vision," he continued, and are "joined in a common understanding that all of the great cities of the world are built on a commitment to great urban public spaces." AUC presented written comments on the Draft Scope Frame­work for the comprehensive plan on June 30; it spoke to specific needs for clarity, responsiveness, conflict resolution, a 25-year planning time frame, citizen advisory committees, a technical advisory committee, and public participation. – Katherine Gregor

• McCRACKEN'S PECAN STREET PROGRESS Former City Coun­cil Member Brewster McCracken, upbeat and looking rested after his tough mayoral run, chatted with me over lunch this week about clean energy, urban design, and rail transit – all enduring passions. Now officing at the former MCC building (though recently renamed the West Pickle Research Building, it's still home to the Austin Technology Incubator, the IC² Institute, and other high tech UT research and development groups), McCracken (no surprise) is working hard on the Pecan Street Project. As a member of the governing committee, he's gifting his time (for now) to help the "energy Internet" project attain nonprofit-organization status, establish a formal membership and sponsorship structure, and implement its plans. He said Pecan Street Project team reports are due within the week; they'll be compiled into a full set of recommendations to guide creation of Pecan Street Project's pilot projects. – K.G.

• REED LOSES ANOTHER APPEAL The Court of Criminal Appeals again denied an appeal from death row inmate Rodney Reed on July 1. Reed was convicted for the 1996 murder of 19-year-old Stacey Stites, but his supporters have long argued that Stites' fiancé, Jimmy Fennell Jr., was a far more likely suspect (see "Who Killed Stacey Stites?" May 24, 2002). Fennell returned to the spotlight last year when he was sentenced to 10 years in prison for sexually assaulting a woman while he was on duty as an officer with the Georgetown Police Department. When Reed's attorneys learned that Fennell had been accused by several other women of inappropriate sexual conduct – intimidation, stalking, and assault – while on duty, they filed a series of appeals, arguing that the newly discovered information strengthens the argument that Fennell was a more likely suspect. The court, however, stood by its position that defense attorneys have not provided enough evidence to undermine their confidence in Reed's conviction. "The allegations of Fennell's misconduct and domestic violence do not exonerate [Reed]," the court wrote. Reed "has failed to show that this information constitutes exculpatory evidence." The case now moves to federal district court. – Jordan Smith