Message to parents: Get to know your kids 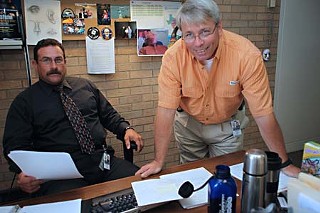 If there's one piece of advice that Detectives James Scott and David Gann, the APD's two-man missing persons unit, could offer parents, it's this: Get to know your kids. Really. Like, who they hang out with. The bulk of the nearly 4,000 cases the team works each year involve juveniles – more than 75% last year – and the vast majority of those involve runaway kids. And that's why knowing your child is extremely important. "I'd say, in 80% of our runaways, the parents can't name, by name, a friend of their child," says Scott, a 15-year department veteran.

"Not one," echoes Gann, who's been with the department 27 years. "I had one the other day. I asked [the parents] for a photo, this was their response: 'Well, where do you expect me to get that?'"

Personal information is king when working a missing person's case because it helps investigators determine, as quickly as possible, whether a person is in danger or whether they've simply walked off the grid. Most people that go missing simply do leave of their own accord – they run away, drop out, and start a new life. Still, a smaller number, roughly 3% of all cases, Scott estimates, involve true abductions – where a person is physically taken against his or her will. Most difficult for investigators, perhaps, is determining whether a person has left voluntarily. "In other words, you see somebody forcing someone into a car, and they're obviously going unwillingly, that's an abduction," says Scott. "When somebody goes to the store and they just don't come back, that's not an abduction. That's an unexplained disappearance, but that's where we start looking at consistency of behavior." And that's also what makes working missing persons cases so different. "That's one of the ways it's different than other cases: You're actually starting with nothing and trying to track it backwards, as opposed to, I've got the crime scene and now I have to figure out where the bad guy went," says Gann.

Despite the difficulties working missing persons cases, however, police boast a fairly high clearance rate: In 2008, according to APD, investigators cleared and closed 96.1% of their caseload. But still, each year, there are the cases that can't be cleared, that remain unsolved, and, like that of Roxanne Paltauf, that haunt investigators who are determined to find answers. Below are a handful of those cases. Last seen: 4/25/09, at a restaurant in Southeast Austin. She was wearing a black shirt and black pants. Her hair is brown with red tips. Last seen: 5/2/07, in East Austin. He has a tattoo on his abdomen of a shield with the initials AV and the number 88. May be traveling with a white Maltese dog. Last seen: 10/24/94, at the old Robert Mueller Municipal Airport. He has a tattoo of Medusa on his right shoulder.

By definition in the Texas Code of Criminal Procedures, all missing persons are defined as either a "missing child" or a "missing person." APD uses the "title codes" to better define and prioritize the category of the investigation along with enhancing statistical data collection.

Missing adult: A person, 18 or older, whose disappearance is possibly not voluntary.

Missing children: Children, under 18, whose whereabouts are unknown and there is a reasonable belief the child's absence is either involuntary or the child may be endangered.

Runaways: Children, under 18, who have voluntarily left the care and control of a legal custodian without consent and without intent to return.

Request to locate: A person, 18 or older, whose reason for disappearance is unknown but there is no reasonable belief that the individual disappeared under suspicious circumstances or is a victim of foul play.

Clearance rate: Number of cases closed after the missing person was located or safely returned.

APD's missing persons unit is responsible for other title codes not included in the above total. These reports fell into categories that required assignment to the unit for investigation. Those include "interference with child custody" – parental custody disputes in which one parent reports the child(ren) missing or abducted by the other parent; these cases are investigated to ensure the child is not a victim of a "parental abduction," which is a criminal offense. Often, these cases are a violation of court orders issued by the civil courts, which generally require the complaining parent to pursue the violation in the civil court holding jurisdiction over that custody case.

Also not included above are "found child/adult" cases – when the person reported missing is located within a reasonable time frame by the responding patrol officers; these generally do not require investigative follow-up since the person has been located, but may require a "community outreach" response due to factors related to the reason for the person's disappearance, such as dementia issues, mental health issues, etc.