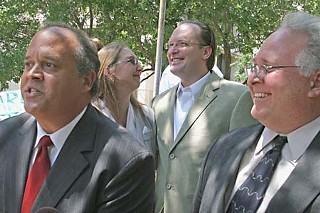 Michael Scott, center, with wife Jeannine, takes in his newfound freedom after he and co-defendant Robert Springsteen were released from jail June 24. The two are awaiting a retrial in the 1991 murder of four girls at a North Austin yogurt shop. Defense attorneys Tony Diaz (l) and Carlos Garcia talk to reporters. (Photo by Jana Birchum)

• TYC Justice Two years after their arrests, and with mounting public pressure to get them to court, there has been movement in the abuse cases against former Texas Youth Commission employees Assistant Superintendent Ray Brookins and principal John Hernandez. A change of venue was announced on June 25, after the Texas Civil Rights Project released a letter to the press requesting that Attorney General Greg Abbott push the case harder (see "TCRP Blasts Abbott Over Delay in TYC Prosecutions," June 26). "It looks like it's been moved to Odessa," said TCRP Prisoners' Rights Program Director Scott Medlock. The case had previously languished with state District Court Judge Bob Parks in Ward Co. but has been transferred to Ector Co.'s Judge Jay Gibson. After the long wait, Medlock said, "I would hope this means that the case will be brought to trial and we'll get some convictions." – Richard Whittaker 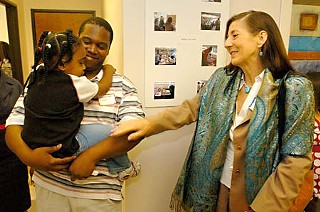 • A Fighting Chance for Dems? Are national Democrats finally ready to take Texas seriously for more than just fundraising? According to a June 5 National Journal article, Democratic Congressional Campaign Committee Executive Director Jon Vogel describes the Congressional District 10 seat of Austin Republican Michael McCaul as one of the party's most promising targets in the 2010 election. The DCCC is excited because Jack McDonald, the chairman and CEO of Perficient, an Austin-based IT consulting firm, has already raised more than $300,000 for a challenge to McCaul. The current District 10 was one of the creations of Tom DeLay's infamous re-redistricting fiasco of 2003, in an attempt to neutralize Austin liberals. Its boundaries run from West Lake Hills to the suburbs of Houston. In 2004, McCaul was elected against only token Democratic opposition, and in 2006 he beat a minimally funded political novice. In 2008, attorney Larry Joe Doherty took the best crack yet with a professionally run but moderately funded campaign; still, he garnered only 43% of the vote vs. McCaul's 54%. – Lee Nichols 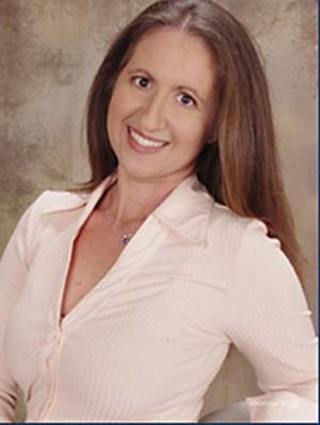 • Lamar Smith's Challenger In other congressional election news: At press time, West Lake Hills Democratic activist and small-business owner Lainey Melnick (right) was scheduled to announce a challenge to Republican Lamar Smith in District 21, which runs from West Austin to San Antonio and west past Kerrville. She'll have an uphill fight: Smith has held office since 1987 and, since 1992, has done no worse than 60% of the vote and has averaged 75%. Austin Mayor Lee Leffingwell was quoted as being a supporter of Melnick's on the press release declaring her candidacy, but according to Burnt Orange Report, his name has since been removed from the "public list of supporters" section of her website. – L.N. 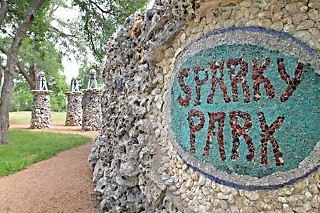 • Sparky Park Hits High Mark A work of art lovingly known as the Grotto Wall at Sparky Park, by artist Berthold Haas, has been recognized as one of the nation's Top 40 public art projects of 2008. Americans for the Arts' Public Art Network selected the work from a pool of hundreds of public artworks submitted for review. Sparky Park, a pocket park inspired by the North University Neighborhood Association, is the former site of an electric substation. The neighborhood group and Austin's Art in Public Places commissioned Haas to transform an old cinder-block wall into what is now the grotto wall. – Amy Smith