Summertime and the living is ... frenzied 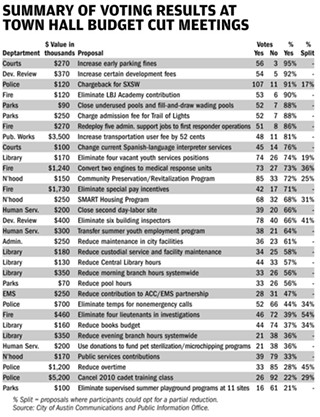 Participants at four town hall meetings were given an opportunity to size up the city budget. According to these tally results of the first three meetings, citizens prefer closing underused or fill-and-draw pools, charging an admission fee for the Trail of Lights, charging South by Southwest for police costs, and increasing the early fines for parking tickets. For full results, see www.cityofaustin.org/budget

News Editor Michael King and his weekly "Point Austin" column are on a well-deserved vacation this week and next. Before cutting himself loose, Michael spent some time trying to square his holiday schedule with a half-dozen other schedules. He consulted with far-flung family members and considered the staff vacation calendar, the list of upcoming stories, and the City Council's summer break to try to gauge a reasonably calm period of time to slip out of town without ambivalence. It's hard to tear Michael away from work. He took one story with him to edit, a poignant, must-read piece about Roxanne Paltauf, a young woman on the brink of adulthood, who vanished in 2006. "All That Remains," by Jordan Smith, appears in this issue.

Of course, it's difficult to plan a summer getaway at a time when news stories are hemorrhaging all over town. Austin is coming into its own as a big city. We're well past the days when summers passed in long, syrupy drawls of sweet insignificance. And if last week's news cycle is any indication, it's going to be a sizzling, spluttering season of revelations here and ... just about everywhere else, it seems. To recap, there were a couple of things that hit us unexpectedly on press day here at Chronicle headquarters: On Wednesday, June 24, the day Michael boarded a plane headed out of Texas, the two men convicted in a gruesome 1991 murder case were released from custody after prosecutors conceded they wouldn't be ready to retry the case by July 6, particularly in light of DNA evidence that bolsters the defense. Fortunately for us, District Judge Mike Lynch handed down his decision early enough in the day for Jordan to put a new top on her story, which by then was already in production (see "Yogurt Shop Murder Defendants Set Free," June 26). Usually judges wait until after we go to press to make their rulings (that's our view, anyway), so the fact that we were able to cash in on this piece of late-breaking news was pretty special. Photographer Jana Birchum stationed herself outside the county jail complex Downtown to capture Michael Scott and Robert Springsteen as they walked out of jail and into the blinding shock of triple-digit daylight and a din of TV cameras (see "Naked City").

Even with the last-minute turn of events that day, officemate Nora Ankrum (watch for her feature story next week!) and I were still betting we'd be getting out of the office at a "reasonable" hour, for a Wednesday. No sooner had we said that than Wells Dunbar spotted something curious in the layout of his big takeout of the city budget (see the complete package, starting with "The Chips Are Down," June 26). He made a good argument for removing the item in question, so out it went – but its elimination required rejiggering the layout. Creative Director Jason Stout had already left for the evening, headed out with his family on vacation, so we handed the pages off to graphic designer Chris Linnen for a quick fix. Chris, by the way, is filling in for Jason this week and designed most of this issue's editorial pages.

All this is leading up to the fact that no matter how hard you try to plan for the unexpected, the unexpected can still catch you flat-footed sometimes. For example, I didn't expect to be filling this column space during Michael's absence, but here I am. Plus, did anyone really expect it to rain nearly two inches this week?

Back to the news. There's lots of it this week. Stateside, the Legislature is back in town for a special session that started Wednesday. It's supposed to be a quick-and-dirty session slated to end before the July 4 holiday, but we'll see what happens come Friday (see Richard Whittaker's "Special Session Could End in Fireworks").

Moving on, school's out, but new Austin ISD Superintendent Meria Carstarphen is in; she started her first day in office Wednesday, July 1, with a media meet-and-greet at Pickle Elementary School. The AISD board of trustees has already adopted her plan to restructure the chain of command (see Richard's "AISD Staff Shake-Up").

The economy is in the pits, but construction cranes are still very much a part of the Downtown skyline. There's no shortage of city-planning issues coming to the fore, and Katherine Gregor is bird-dogging the process as it develops (see her "Developing Stories").

Meanwhile, a new City Council took office in June, then recessed until July 23. Just look at some of the delicate balancing acts council members will face when they come back:

• A $30 million budget shortfall. City Man­ag­er Marc Ott will present the proposed 2010 budget to council July 23. Council members are scheduled to deliberate the package Aug. 5, 19, and 26, and the new budget takes effect Oct. 1. An interesting component of the financial plan centers around the possibility of Austin Police officers and EMS workers giving up pay increases in 2010 as part of separate agreements the city brokered with both groups. The two labor associations are expected to vote on the deferrals by the end of July. (In a related salary story, Lee Nichols is covering a simmering controversy at Capital Metro; see "Transit Union Resists Giving Up Pay Raise")

• A new music department. At its last meeting, June 18, the council came within a hair's breadth of approving the creation of a two-person division to streamline and strengthen the ties between the city, neighborhoods, and the music community. But the vote was postponed after the police union privately questioned the wisdom of financing a new department when officers were considering giving up raises. Council punted the matter to Aug. 6.

• Water Treatment Plant No. 4. The council is slated to return to this long-running conundrum some time in August. The difference this time is that the council is somewhat greener under new Mayor Lee Leffing­well, with new Council Members Bill Spelman and Chris Riley rounding out the enviro contingent. Environmentalists largely oppose construction of a new plant, favoring instead stricter water conservation measures. While we're on the topic, the city hit a high-water mark June 25, with the Austin Water Utility reporting it pumped nearly 218 million gallons of water that day – a high for the year (though well below historic records). Just wait until August. By then, no telling how many records the city will have set. At last count, Austin Energy was on its third all-time record in six days.

• Wildflower Commons. This hot potato – a proposed mixed-use development in the Barton Springs/Edwards Aquifer Conservation District – returns to City Council Aug. 20. The developer is seeking a zoning change to a planned unit development, a dramatic shift from its current zoning for single-family residential and office use.

• And if that's not enough, there's this clutch of unresolved bugaboos: the search for a new Solid Waste Services director to bring the department into the enviro-minded present, the perpetually in-draft Downtown and comprehensive plans, rancor in the ranks of the Fire Department, controversial guidelines for designating what is and isn't a "heritage tree," and the upcoming (or is it?) launch of MetroRail.

Clearly, this summer will be a sweaty test of endurance for anyone who's playing along. Be cool.

Participants at four town hall meetings were given an opportunity to size up the city budget. According to these tally results of the first three meetings, citizens prefer closing underused or fill-and-draw pools, charging an admission fee for the Trail of Lights, charging South by Southwest for police costs, and increasing the early fines for parking tickets. For full results, see www.cityofaustin.org/budget.

Participants at four town hall meetings were given an opportunity to size up the city budget. According to these tally results of the first three meetings, citizens prefer closing underused or fill-and-draw pools, charging an admission fee for the Trail of Lights, charging South by Southwest for police costs, and increasing the early fines for parking tickets. For full results, see www.cityofaustin.org/budget.