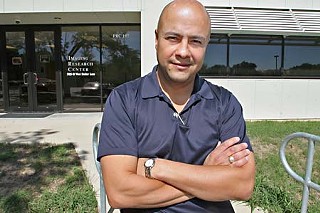 When the Department of Veterans Affairs' brain imaging lab leaves Austin for Waco, there won't be much to move. An MRI machine used for research belongs to the University of Texas. The lab's director was fired in January, and the plan he developed to study and treat returning veterans with traumatic brain injury has been scrapped.

Most of the money is gone, too. Of the $6.3 million in taxpayer money allocated in 2004 to the Central Texas Veterans Health Care System to fund the lab, a little more than $2 million is left, says VA spokeswoman Diana Struski. What remains, she says, will be used to clear out the Brain Imaging and Recovery Lab's offices at the J.J. Pickle Research Center and terminate the lease with UT.

After spending more than $4 million, the Austin lab is closing without one veteran having been studied or treated. Last month, the VA announced that the BIRL was moving to Waco, where researchers using a $3.5 million mobile brain scanner at the VA's Center of Excellence for Research on Returning War Veterans will conduct brain research.

The ousted director of the BIRL, neurologist Robert Van Boven, says that much of the wasted money was gone before he arrived. "By the time they hired me, they had already pissed away one-third of their money – $2.1 million," he says. A July 2008 report by the VA Office of Investigator General backs up his accounting.

When Van Boven took the BIRL's helm in July 2007, he wrote a formal protocol to exclusively study traumatic brain injury in veterans returning from battle. He reallocated the remaining $4 million in BIRL funds for a four-year TBI study, and the budget was approved by his bosses at the Central Texas VA.

But before the research began, Van Boven butted heads with his superiors. The day after the BIRL's official grand opening in Jan­u­ary 2008, Van Boven was suspended from his leadership role and reassigned to clinical work. He was fired in January of this year. The federal Office of Special Counsel is currently conducting an investigation into possible whistle-blower reprisals; it is illegal for a federal agency to fire an employee for disclosing misconduct.

Beginning in the fall of 2007, Van Boven began reporting misuses of BIRL funds to his bosses at the Central Texas VA, based in Temple. Van Boven alleged that an ongoing study of diabetes-related eye dysfunction – begun before he was hired – was outside the BIRL's mission. Moreover, he reported that an endocrinologist and a contractor conducting the research were not qualified researchers and had little or no data to show for contract work billed to the VA and hundreds of hours of brain scanner time, for which UT charged the lab $486 per hour.

Van Boven's superiors at the Central Texas VA – including Edward Sherwood, then chief of staff, and Paul Hicks, associate chief of staff for research – refused to act on his disclosures, so Van Boven went over their heads to officials in Washington, D.C., adding accusations of mismanagement. His disclosures resulted in two VA Office of Investigator General reports – released in July and December 2008 – that partially substantiated claims that the research was faulty but did not verify his allegations of mismanagement.

Late last year, a VA committee was set up to consider closing the lab. "The panel has met, and there could be a possible recommendation to close the BIRL," Struski said in December. However, after an outcry from veterans' groups and a letter from four Central Texas congressmen, the VA announced last month that the BIRL would be moving. "We looked at the duplication of efforts between the BIRL and the Center of Excel­lence's missions, geographic access to active members, and not having duplication at two sites," Struski says. She was also quoted in a June 22 Washington Post article as saying that problems uncovered at the lab were "part of the decision" to move.

The center’s director, Suzy Gulliver, a psychologist and professor at Texas A&M College of Medicine, says the center will study the conjunction of mild TBI and post-traumatic stress disorder, a dual affliction seen in many returning war veterans and an area where experts agree that more study is needed. The center, which broke ground in April, and its mobile brain scanner will be better able to serve outpatients with mild TBI, Gulliver says.* Those with medium and severe TBI, she says, tend to be hospitalized and are being served at other facilities, such as the new National Intrepid Center of Excellence for Traumatic Brain Injury, which opened last year in Bethesda, Md.

Van Boven, meanwhile, has taken a position with the U.S. Army as clinical director of the TBI program at the Irwin Army Com­mun­ity Hospital in Fort Riley, Kan. Neverthe­less, he continues to fight the BIRL closure. "What really pisses me off is that nobody has been held accountable for the waste, fraud, and mismanagement at the Central Texas VA," he says. "They want to deny the problem, cover up the problem, bury the problem, and at the same time use it as an excuse to shut down the BIRL."

*[Editor's Note: The original version of this article contained an editing error; a passage intended to quote Suzy Gulliver on the activities of the Waco research center was mistakenly attributed to VA spokeswoman Diana Struski.]