Prosecution not ready for trial After a hearing that began June 18, Travis County District Judge Mike Lynch ruled Wed­nesday morning that Robert Springsteen and co-defendant Michael Scott will be released from jail on their own recognizance pending their eventual retrial for murder in the infamous 17-year-old yogurt shop murder case.

Lynch's decision to free the two men dealt a devastating blow to the prosecution, raising questions about the D.A.'s ability to withstand mounting evidence supporting the defense. Scott was scheduled for retrial starting July 6, a date set months ago, but on June 24 the Travis County District Attorney's Office announced in court that it was not ready to prosecute. At issue is the discovery last year of unknown male DNA found on a vaginal swab taken from the youngest victim, 13-year-old Amy Ayers. The D.A.'s Office has been searching for a match to the DNA but after testing more than 100 people – including crime scene and lab personnel, police, firefighters, and friends and acquaintances of the defendants – has not been able to identify the donor. Attorneys for Scott and Spring­steen say the discovery of the unknown male DNA exonerates their clients, but D.A. Rosemary Lehmberg says that isn't so. "It just does not exonerate anybody," she said during a Wednesday press conference following the judge's decision.

Still, it doesn't appear that Lynch is willing to let the prosecution off the hook indefinitely. The case will be back in court Aug. 12, when prosecutors will be asked to update their progress and discuss when they'll be ready to try Scott. Lynch said he expected the state to come prepared with a "more definite game plan," or the court will produce its own.

The latest chapter of the seemingly endless courtroom saga began in March 2008, when new DNA testing by Fairfax Lab (Virginia), working for the state, revealed an unknown male DNA profile inside the body of Ayers, who was murdered with three other young women in a North Austin yogurt shop in 1991. The DNA profile from Ayers' body does not match Springsteen or co-defendant Scott or two other men – Maurice Pierce, who prosecutors had dubbed the "mastermind" behind the grisly murders before dismissing all charges against him in 2003, and Forrest Welborn, who prosecutors had charged acted as a lookout but against whom two grand juries failed to return an indictment.

That revelation sparked yet another round of DNA testing, undertaken by the defense. In court last week, Joe James Sawyer, one of Springsteen's attorneys, said those additional tests, completed by experts with the company Orchid Cellmark, revealed what could be yet another unknown male DNA profile – on vaginal swabs taken from Sarah Harbison, 15, and on a ligature removed from Eliza Thomas, 17. Importantly, testing has also revealed that a swab taken from the fourth victim, Sarah's older sister, Jenn­ifer Harbison, 17, matches the unknown DNA found inside Ayers.

The startling results, Sawyer said at last week's hearing, not only exclude Springsteen – to a "scientific certainty" – from having left any iota of DNA at the scene but also exonerates him from having participated in the grisly quadruple murder.

But Assistant District Attorney Gail Van Winkle replied that the results of the new DNA testing suggest only that there is, perhaps, one additional suspect whose identity remains a mystery.

To review the defense's test results, prosecutors turned not to another DNA lab (which presumably would have undertaken a round of DNA tests to either confirm and duplicate or refute the defense results) but instead to academician Mitchell Holland of Penn State University, who reviewed the results obtained by Orchid Cellmark. Presenting his opinions, Van Winkle argued that while Holland agrees there is an unknown male DNA profile among the evidence – and that the same unknown male DNA has been found inside both Ayers and Jennifer Harbison – that is where any agreement with the defense ends. According to Van Winkle, Holland's opinion is that the sample found on Sarah Harbison was too small to allow any conclusions about its source and that the profile found on Thomas' ligature could be the result of cross-contamination that occurred back in 1991 at the Travis County Medical Examiner's Office. (But since prosecutors have already tested dozens of people in an attempt to match the first unknown profile found, it would seem logical that they would check the Thomas sample against those they already have on file.) In sum, Van Winkle said, the state disagrees with the idea that there could be "multiple unknown" DNA profiles. "There is only one unknown male donor," she said.

While there may be some disagreement over how many unknown males were involved, there is no doubt now that at least one unknown male left DNA found inside two of the suspects – and that directly casts further doubt on the state's case against Spring­steen and Scott, which is built almost entirely on separate "confessions" each man gave to Austin Police detectives in 1999. After hours of questioning, including repeated questions about whether he'd raped Ayers, Springsteen finally admitted that he had. But each defendant ultimately recanted his confession, and during each man's original trial (in 2001 and 2002), defense attorneys sought to introduce testimony that the statements were the product of coercive techniques known to produce false confessions. The state responded that similarities between the two confessions proved they were reliable. (Two courts of appeal ultimately disagreed and returned the cases for retrial.)

Although prosecutors – including Lehmberg – have said the confessions remain strong evidence of guilt, the lack of any DNA evidence matching Springsteen now casts serious doubt on a key part of his confession – namely that he raped Ayers.

Nonetheless, Lehmberg told reporters Wed­nesday that she still finds the confessions reliable and said the investigation for the alleged "fifth man" continues. "We'll investigate until we get to the point we believe there's nowhere else to look." 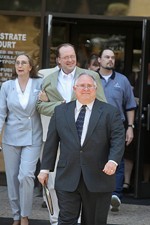