How much money did Perry really save? 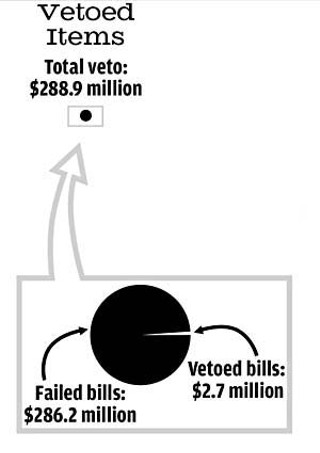 Before signing Senate Bill 1 – the state budget for the 2010-11 biennium – Gov. Rick Perry used his line-item veto to take $288.9 million out of the $182.3 billion approved by the House and Senate. In his accompanying proclamation, Perry lauded lawmakers for reducing general revenue spending by $1.6 billion from the 2008-09 budget, even though total projected expenditure is up $14.5 billion. As for Perry's reductions, they're really technical corrections, removing costs for bills that didn't pass ($286.2 million) and bills he vetoed ($2.7 million). For example, the biggest single deletion was the cash for the failed Children's Health Insurance Program expansion. The process went more smoothly than in 2007, when Perry accused junior and community colleges of inflating their group insurance costs and the Legislative Budget Board of undercalculating the true cost of bills (see "Gov. Perry's Ham-Fisted Veto Pen Strikes Again," June 22, 2007). While there's no similar finger-pointing this year, Perry struck three notes of warning: 1) that he wants more budget transparency, 2) that diversions need to end, and 3) that agencies shouldn't get used to projects paid for with American Recovery and Reinvestment Act money (while ignoring that the regular budget has been bailed out with federal stimulus cash).