A look at the bills whose lives were cut short 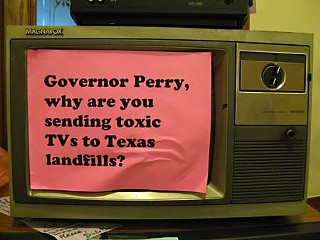 One of several TVs displayed at the Capitol Saturday in protest of Gov. Perry's veto of the TV recycling bill. House Bill 821, the e-waste recycling bill, was one of the victim's of Rick Perry's veto pen. (Photo by Richard Whittaker)

While the state's lawmakers are still waiting for him to call a special session, Gov. Rick Perry has put the final period on the regular session of the 81st Legislature by issuing his list of vetoed bills.

Before the veto deadline on June 21, Perry killed 38 bills – 37 announced at close of business on June 19, plus Senate Bill 2038, which he quietly killed in the final days of the session. He also used his line-item veto to remove $288.9 million from the 2010-11 budget (see below). Both statistics are down substantially from 2007, when he killed 54 bills and struck $646.5 million out of the budget.

The Travis County delegation was hit heavily by Perry's red pen, with six bills by local authors going down in flames. Sens. Kirk Wat­son and Jeff Wentworth and Rep. Eddie Rod­riguez lost two bills each, while other measures – including the homestead disaster reconstruction reforms in Rep. Donna Howard's HB 770 – passed without his signature.

Of all the locally authored bills that died, the child protection measures in SB 1440 have gathered the most headlines.

Arguably, it wasn't really SB 1440 that Perry vetoed but SB 1064, the text of which was added on as a last-minute amendment. Supporters at child advocacy group Tex-Protects said the amendment "clarifies what Child Protective Services ... must do to get a court order to aid a child abuse investigation." But opponents Texans for Accountable Govern­ment called it an underdebated measure and an "egregious trampling of our fundamental rights." In his veto statement, Perry echoed that line, but bill author Watson said opposition was based on "misunderstandings and misinterpretations. ... Let's be clear – both pieces of legislation were heard in the House and Senate and approved unanimously at every step."

Other dead bills more directly affect Austin, and Rodriguez argues that both of his bills could have helped keep housing affordable in his district. HB 2692 would have allowed the city to instruct developers to include an affordable-housing component in condos of eight units or more within a mile of train stations. Rodriguez was equally disappointed by the demise of HB 3983, which he called "the final fix for the Homestead Preservation bill" he authored in 2005. He had already done some work on it in 2007, and this most recent tweak clarified the roles of city and county in establishing tax increment financing districts. But like SB 1440, it was killed for a late amendment, proposing a study of property-tax circuit breakers. Rodriguez said Perry "says he doesn't like the circuit-breaker program, but this is just a study. I don't understand how you can be opposed to a study."

As for Perry's motivation, Rodriguez said there was nothing wrong with either piece of legislation: "There's obviously just a difference of philosophy of public policy that he has and I have on the issue of affordable housing."

Local pressure groups saw their agendas thwarted as well. Texas Campaign for the Environment Executive Director Robin Schneider had praised the Legislature for passing HB 821, the famous "zombie TVs" law. The bill, which was supported by an array of environmental and industry groups, created a TV-recycling program similar to the state's computer-recycling program. When she asked Perry why he had killed the TV program, she explained: "He said this was an industry bill. Well, coming from Texas' business-friendly Perry, that's an interesting argument."

Only one delegation suffered more vetoes than Austin, and that was Houston. It was seemingly with no sense of irony that Perry vetoed SB 2468 – requiring former Harris County employees to wait two years before becoming lobbyists – on the same day that he hired Ray Sullivan, former head of Austin-based lobbyists Sullivan Public Affairs, to be his new chief of staff. Even though this measure would have put the state's biggest county on the same standard as state government, in his veto statement Perry said he would prefer the authors work with the Texas Ethics Commission to develop "uniform lobbying standards [for] all levels of Texas government." Bill sponsor Rep. Garnet Coleman, D-Houston, was unconvinced. Noting that 17 former Perry staffers have gone through the revolving door to become lobbyists, Coleman said, "Ethical behavior in one area of government shouldn't have to wait for the rest of the state to catch up."