To restart the economy while saving the planet, the Congress for the New Urbanism advocates traditional neighborhoods for all 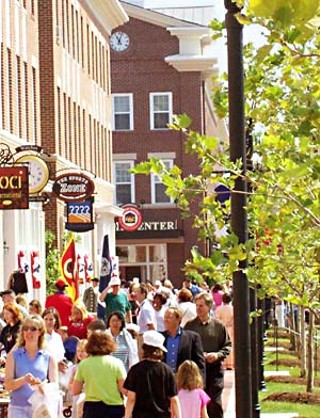 "This is one of those moments to step up and articulate what urbanism is worth to America."

That's how Scott Bernstein, president of the Center for Neighborhood Technology, summed up the call-to-service at CNU 17, the 2009 Congress for the New Urbanism, June 10-14 in Denver. The planning organization has stepped up its no-sprawl message, lobbying in D.C. for new federal law that promotes sustainable development patterns through urban reinvestment. The Obama administration reportedly is listening: "The biggest urbanist in the White House is Barack Obama," observed John Norquist, CEO of CNU and a former mayor of Milwaukee.

New Urbanists are a frankly evangelical bunch; for nearly two decades they've preached that compact urban form can help correct everything from poverty to obesity. Increasingly, their anti-sprawl message appeals to both policy-makers and next-gen lifestylers (the one-third of Americans who now say they'd like to live near a coffee shop and a streetcar stop in a cool city neighborhood). At CNU 17, two overarching themes of national import emerged. One was the economy, stupid: how smart city-shaping, supported by the right federal transportation policy and funding, offers a powerful tool for communities across the U.S. to create value, wealth, and jobs now. The second was climate action: how U.S. policy that promotes compact (re)development is essential to the fight against global warming.

Whether legislation incorporating New Urbanist language will actually get passed by Congress during the next year remains to be seen – Norquist emphasized, "There's a lot of work to be done." But if it does, the discussions in Denver will affect Austin, shaping the region's neighborhoods, Downtown plans, rail lines, and road projects. Here's a peek at policy trends.

CNU 17 was headlined "the Convenient Remedy," to emphasize New Urbanism as a key antidote to "the inconven­ient truth" of global warming (see www.cnu.org/climatemovie). CNU is launching a climate-action campaign to encourage everyone to cut driving by half – a goal feasible only if cities provide ample transit, walkable-bikeable districts, and live-work-play neighborhoods. In a lead session on the Green Dividend, CNU co-founder Peter Calthorpe presented compelling research contrasting urban carbon footprints against those of suburban sprawl. For example, in the San Francisco Bay Area, modeling shows that every house exported to far-flung suburbs results in five times the greenhouse-gas emissions. By contrast, attested Calthorpe and other presenters, the compact development patterns that lower a community's carbon footprint also make it more livable, attractive, and fiscally strong.

But at a session on Selling the Green Urban Advantage, Austinite Robin Rather of Collective Strength cautioned the CNU faithful. Most Americans won't make lifestyle changes just for the abstract good of "sustainability" or the planet or "placemaking." What works, according to the firm's research: repeated, upbeat, "what's in it for me" messages about how driving less can make our daily lives happier, healthier, and wealthier. A good example is the three-minute film announced as the winner of CNU's 2009 video contest. The entertaining short "Built to Last" asks, "What's the greatest threat to our planet?" After ruling out cars, cow flatulence, and aliens, it answers, "cul-de-sacs!" and promotes the pleasures of five-minute walks over 20-minute commutes. Catch it on YouTube.

In more sober language, the same ideas are in the draft cap-and-trade climate bill making its way through Congress. Thanks in part to CNU's lobbying, said Norquist, the bill specifies that cap-and-trade money can be invested in transit projects and in small-scale street networks – but not in huge whiz-by roadways or cul-de-sacs. The draft legislation also incorporates standards from Leadership in Energy and Environmental Design for Neighborhood Development (green-building on a neighborhood development scale), which favor places with at least 90 intersections per square mile.

Norquist pointed out that while federal highway policy has eased congestion, its blindered focus on just moving cars has harmed cities like Detroit. Fast highways bypass neighborhood shopping centers and business districts; old-fashioned street networks connect them. As cities nationwide reel from the economic meltdown, CNU is seizing the moment to convince lawmakers to take a fresh approach.

"The entire transportation funding system for this country is broken," asserted board member Mike Krusee, a member of CNU's legislative committee and former chair of the Texas House Transportation Committee. Rather than rewarding failure (suburban sprawl), he suggested, new federal funding criteria should favor the most efficient roadway and transit projects – those that connect densely populated areas. Bernstein and others spoke about how CNU is tying in the affordable housing piece, too – renewing collaborative efforts with Hous­ing and Urban Development and advising the HUD-U.S. Dept. of Transportation Sustainable Commun­i­ties partnership.

Alongside groups like Reconnecting America, CNU has always promoted transit-oriented development. (Tours of the Denver area provided a living lab for how funding a regional rail system can lead to handsome infill development around stations – even years before lines are built.) Now CNU has a road-funding message too: Prioritize new Main Streets, not honking-big separated highways, to help cities nationwide stay economically strong. Toward that end, urbanists are working to shape the bill that reauthorizes the Trans­porta­tion Equity Act for the 21st Century, or TEA-21.

The rewrite of Safe Accountable Flexible Efficient Trans-portation Equity Act: A Legacy for Users, or SAFETEA-LU, federal transportation law governing highways and transit projects that receive federal aid, is occurring at a pivotal time: as concerns converge for the economy, climate, alternative energy, and transportation's role in growth and development patterns. TEA-21 has provided federal aid for highways – and even for bike, pedestrian, and recreational trails – yet excluded local road networks. That's an omission CNUers aim to fix. Their emphasis on efficient networks is influencing the "complete streets" policy advocated by House Transportation and Infrastructure Chair James Oberstar (D-Minn.) in a white paper released June 18. The blueprint also announced the creation of the Office of Liva­bil­ity within the U.S. Department of Transportation, promoting transportation plans designed to create livable and environmentally sustainable communities.

Even state transportation departments in Virginia and Texas are converting. At CNU 17, board member Scott Poli­kov of Austin spoke about co-chairing a TxDOT committee charged with adding urban design criteria to the state's roadway design process. The groundbreaking outcome: TxDOT has become the first state transportation department to adopt the resulting Institute of Transportation Engineers/CNU manual, Design­ing Walkable Urban Thoroughfares: A Context Sensitive Approach. Said Polikov, "Spending money on transit isn't enough; you have to change the charge of the MPOs," so that metropolitan planning organizations actually plan regions, not just move cars. Nick Donohue, assistant secretary of transportation in Virginia, talked about how that state now requires a dual focus on mobility and urban placemaking; it has enacted new policies requiring connected street networks.

In Austin, as in cities nationwide, it's the central neighborhoods built before World War II that are most beloved for their character. In sum, CNU 17 issued a call for city dwellers to actively support well-planned reinvestment in central areas now – and in new places patterned after them. Better for livability, better for the planet.

Austinites made a good showing at CNU 17, with many speaking before an international audience. On June 17, local attendees recounted highlights and issued Austin calls for action at Cafe Urban, a meet-up of the Congress for the New Urbanism Central Texas chapter.

Robin Rather and Sean Garretson, Collective Strength – Rather presented research on the most effective messages for a climate-action campaign, to encourage people to drive less, at Selling the Green Urban Advantage.

Scott Polikov – Inducted at CNU 17 as new board member (longtime Austinite, now in Fort Worth).

Our Bodies, Our Cars
The links between urban design and public health