Point Austin: The Supremes Bail Out

On Monday, I was waist-deep in a thumb-sucker about the relative coherence of Gov. Rick Perry's vetoes vs. that of those Austinites taking part in the public forums concerning the city budget – I would have made it work somehow, believe me – when the U.S. Supreme Court issued its ruling in the Voting Rights Act case initially filed by the Northwest Austin Municipal Utility District No. 1 (better known in these parts as Canyon Creek). That story's been on my beat, so I've left the vetoes in the capable hands of Richard Whittaker ("Austin Hit in Veto Spree") and the budget in the hustling purview of Wells Dunbar ("The Chips Are Down").

As court watchers know by now, the Supremes ruled, by a remarkable 8-1, that they would not directly address the constitutionality of Section 5 of the VRA, which requires Depart­ment of Justice "preclearance," for racially discriminatory effects, of changes in voting procedures within certain "covered jurisdictions" – primarily the states of the old Deep South, including Texas. Explicitly dodging that constitutionality bullet, the court said (in the opinion written by Chief Justice John Roberts), "Our usual practice is to avoid the unnecessary resolution of constitutional questions." Instead, the eight justices decided that even jurisdictions as small and unimposing as Canyon Creek – whose voters are registered through Travis County – can seek "bailout" of the preclearance provision, if they can show they have not discriminated against minority voters for at least 10 years.

The vote is remarkable because it's almost exactly the reverse of what was widely anticipated after the May arguments, when observers (this one included) guessed from the justices' questions that only Anthony Kennedy stood between the four entrenched conservatives and the more moderate wing. Since Kennedy expressed dismay that the VRA still covers only certain states, a 5-4 vote against Section 5 on constitutionality grounds was widely predicted, with the bailout provisions moot – it seemed explicit in the law that only a voter registration district (e.g., Travis County) could apply for bailout. Not so, said the justices – every teeny jurisdiction, including glorified suburban subdivision Canyon Creek, has the right to seek bailout, so the constitutional question does not clearly arise. (Only Clarence Thomas objected, and his dissent argues strenuously that Section 5 is no longer necessary.)

Cue the next lawsuit.

The decision was surprising enough that early reaction from partisans was delayed and a bit puzzled, with both sides declaring partial victory. Defenders of the VRA (among them Texas Democrats) hailed the decision as salvaging Department of Justice review of voting discrimination, and supporters of the NAMUDNO plaintiffs congratulated the court for broadening the eligibility for bailout. Both may well be right. If the VRA survives through the next census and redistricting, that might be sufficient to defend minority voting rights in Southern and Southwestern states through the next decade. On the other hand, the same folks who underwrote the current suit immediately made it clear they won't wait for more grass to grow.

Edward Blum of the Project on Fair Repre­sent­ation (who with the American Enterprise Institute helped pay for the lawsuit, represented pro bono by former Clarence Thomas clerk Gregory Coleman) read the court's decision as a call to action. "The language of the opinion leads me to believe they will strike down this provision of the Voting Rights Act on constitutional grounds in a future case," declared Blum. "Sooner rather than later, the justices will have this issue before them once again."

In other words, Blum and his allies will continue looking for more plaintiffs – oppressed suburbs like Canyon Creek, which had to complete a Department of Justice approval form in order to move its polling place – and the court's majority made clear it will look favorably on any jurisdiction that might be denied bailout.

The Mexican-American Legal Defense & Educational Fund and NAACP Legal Defense and Educational Fund attorneys who argued against NAMUDNO heralded the court's decision as well, as preserving the heart of the VRA. It's too early to tell if that's just so much bravado. Roberts' opinion does acknowledge that the "historic accomplishments of the Voting Rights Act are undeniable," a remarkable turnaround of his lifelong work against the law (beginning as a Reagan-era law clerk) as well as his snide comment during the May arguments that the long-demonstrated deterrent effect of Section 5 amounts to nothing more than a symbolic "elephant whistle." "Well, that's silly," said the chief justice. "There are no elephants, so it must work."

It seems clear that to gather eight votes, without even a concurring opinion from the court's VRA supporters, the justices as a group decided to dodge the constitutional question altogether and use the bailout provision as their own escape hatch. The result is not only an invitation to more lawsuits – Roberts' opinion, amplified by Thomas' dissent, reads like an instruction guide to future plaintiffs – but a challenge to Congress to provide more "current" evidence of racial discrimination in the covered jurisdictions than was provided in the most recent congressional renewal (2006).

As it happens, rather than wait for Blum and the court, Congress need look no further than the Texas Legislature, where the determination of Republicans to impose effectively discriminatory "voter ID" standards that would disproportionately affect minority voters virtually derailed the entire current session. Thomas argues that there is no contemporary evidence of official intent of "violence, terror, and subterfuge in order to keep minorities from voting." Yet certainly the GOP push for voter ID – primarily, as it happens, in the states covered by the VRA – is evidence that subterfuge, at least, remains in the voter-suppression toolbox. Add to that the Tom DeLay-managed re-redistricting of the state's congressional districts, and the current Congress should find plenty of evidence to update the VRA.

Whether that evidence might be enough to satisfy a court majority audibly poised to declare racial discrimination in voting a relic of the past – sort of like white-flight suburbs – is a tale for another day. 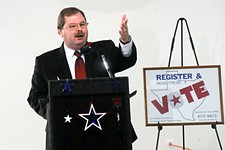