An intergenerational Juneteenth celebration, sponsored by the Austin Parks & Recreation Department, brought seniors and youngsters together Tuesday in commemoration of the end of slavery, which was proclaimed on June 19, 1865. Here, kids at the Doris Miller Auditorium admire photos of African-American heroes. (Photo by Jana Birchum)

• New Energy Task Force As Austin Energy develops its generation plan – for where we'll get our electricity through 2020 – a newly appointed advisory task force has been thrown into the mix. Officially created by City Council last week, the Austin Generation Resource Planning Task Force was devised this spring by council member and incoming Mayor Lee Leffingwell to give AE's commercial and industrial customers – and other stakeholder groups – a more prominent voice. Local energy watchdogs worried that a task force stacked with reps from industrial customers (who account for 60% of the utility's business) would shun greener options out of rate-hike fears. But council ultimately called for a task force "representing a diverse group of customer and community interests ... [that] shall not be weighted in favor of any one interest group or customer class." The nine-member group includes the chairs of the city's Electric Utility and Resource Management Commissions, environmental group staffers, a rep for commercial and institutional building managers, local high tech equipment fabricators, and a renewable energy consultant. The task force, a purely advisory group, is directed by council to issue recommendations by Oct. 31. Your thoughts are welcome, too: Visit the Get Involved section of www.austinsmartenergy.com. – Daniel Mottola

• REdesigning East Riverside East Riverside's 3.5-mile stretch of sprawl-in-the-city, between I-35 and Highway 71/Ben White, needs help. As the area begins to redevelop – it is home to big new projects, slated for future rail transit to the airport, and rife with for-sale signs on large tracts – the city of Austin is trying to get out ahead with an urban-design master plan for the corridor. Interested Austinites can weigh in on the East Riverside Corridor draft plan (prepared by consultants with community input) at a public meeting 6pm, Thursday, June 25. A staff presentation will cover suggested new roadways, bike lanes, mass transit, open space, urban design enhancements, and development scenarios; participants can ask questions and provide feedback. One concern: Will redevelopment force out affordable family and student housing? Today, the area is home to about 43,000 residents, as well as 200 businesses. Once a master-plan vision is approved by council, staff will develop a regulating plan; the land-development code will be changed to support plan implementation. Meeting location: Austin Community College Riverside campus, 1020 Grove, Lecture Hall (Building G, Room 8100). The draft plan and a feedback form are also available at www.eastriversidecorridor.com, or contact Senior Planner Erica Leak at 974-2856. – Katherine Gregor

• Heading to T. Don Hutto On June 20, in observance of World Refugee Day, Amnesty International and a host of other activist groups, including the League of United Latin American Citizens, Grassroots Leadership, and Border Ambassadors, will protest the incarceration of immigrant children and their parents at the T. Don Hutto Residential Cen­ter in Taylor. Convening at noon at Heritage Park in Taylor, the event will include a march to the prison, a vigil, and a rally. "If not you, then who?" is the call to action in the flier, which continues, "Stand in solidarity to end immigrant detention." Amnesty International field organizer Adiyah Ali e-mailed the Chronicle that AI "is participating because we believe that there are more humane alternatives to detention, and that all human beings, regardless of citizenship status, deserve to be treated with dignity and respect," adding that AI is presently investigating potential violations of international law inherent in the detention of noncriminal immigrant families. Under a multimillion-dollar contract administered by Williamson Co. Com­mis­sioners Court, U.S. Immigrations and Customs Enforcement transports apprehended immigrants to Hutto and pays for-profit Corrections Corporation of America to operate the facility. Critics worldwide have faulted CCA for making huge profits off the imprisonment of innocent children – some of them just infants – and the government for allowing it. – Patricia J. Ruland 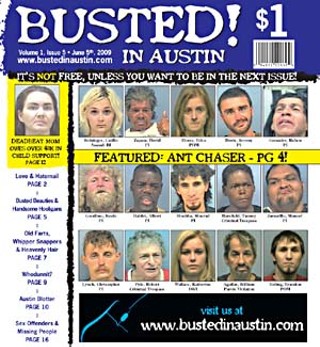 Here's one more reason to stay on the right side of the law: It's the only sure way to avoid having your mug shot picked up and printed in Austin's newest rag, Busted! In Austin (www.bustedinaustin.com). The $1 paper – found in a host of convenience stores around town – is the brainchild of local media entrepreneur J. Martin Ward, a former freelance photographer whose new venture is part picture book and part Smoking Gun (www.thesmokinggun.com). Inside you'll find drunks, drunken drivers, burglars, dope smokers, and more – sometimes grouped by snarky category, such as "Handsome Hooligans" or "Busted Beauties," or just in row after row of government photography at its finest, culled from the thousands of mug shots snapped by local law enforcement each year. Ward considers the project something of a social equalizer – the face of crime, he says, isn't homogeneous. Ward has been printing about 5,000 papers each run – his fifth issue came out June 5 – and has sold out each time. He hopes to up that soon and to expand to other cities. Indeed, he's already bought the Busted! domain name for every major city in Texas. – Jordan Smith

With Capital Metro boosting June 18 as Dump the Pump Day and encouraging drivers to use public transport, rail enthusiasts are still waiting for Capital MetroRail to arrive. The transit authority plans to release a major update this week, and spokesman Adam Shaivitz said staff have reached the "last few milestones in the final stage" to open the Red Line between the Austin Convention Center and Leander. With the Centralized Traffic Control system installed and certified, trains are running schedule tests from 5:40 to 9:50am and will start afternoon tests soon. Cap Metro is also working on the last few issues to ensure Federal Railroad Administration rule compliance. So when will the Red Line roll? After the public embarrassment of canceling its March 28 launch party (see "Any Way to Run a Railroad?," April 3), Shaivitz said, "We'll make sure every component is working as it should before we announce an opening date." – Richard Whittaker