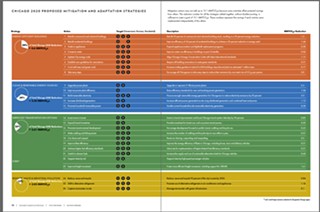 For national perspective, it's illuminating to review Austin's annual report (and the plan it contains) against the Chicago Climate Action Plan, released Sept. 19, 2008. The Chicago Climate Action Plan is a comprehensive plan – the real deal, created with the backing of a high-powered, multistakeholder task force. The published 56-page plan is an appealing full-color brochure; it and the content-rich www.chicagoclimateaction.org cite extensive scientific research and analysis and provide an inspirational vision. While Chicago is a much larger city, projected to grow to 3.3 million people by 2030, like Austin it calls itself "the most environmentally friendly city in the nation." Three lessons we could take from its plan, to help challenge for the title:

The Chicago plan wisely starts off by detailing "the major effects climate change could have on our city." By emphasizing that Chicagoans have skin in the global warming game – this ain't just a problem for polar bears – Chicago creates local motivation to make the necessary changes. Austin would do well to follow suit. The next iteration of the Austin Climate Protection Program should carefully document how life in Central Texas will change under global warming scenarios – painting a vivid picture of the adaptations required and their costs – and communicate those impacts aggressively to the business community and citizens.

Reversing global warming is largely a challenge of education and motivation, at this stage. Chicago invested in high-caliber communication tools. The published plan and website are interesting, rich in content, and well-presented for a lay reader. They're appealing because they're professionally written and designed, conveying key concepts with graphics and illustrations. As educational and motivational tools, they ably carry the city's message to the community and the business sector.

Advocate and Call for Action

The "Chicago 2020 Proposed Mitigation and Adaptation Strategies" section calls for 26 specific actions for mitigating greenhouse-gas emissions. It also calls for nine adaptation actions to prepare for climate change. Those calls to action are based on extensive research into both emission sources and anticipated impacts; the ideas proposed specifically respond to the research findings. By contrast, the ACPP wimps out; it does not publicly advocate for any policy communitywide or regional changes.

But We're Better on Renewables

Like Austin, Chicago has had a mayor – Richard M. Daley – who's been outspoken about the critical importance of climate protection. However, Daley has been able to drive a more comprehensive initiative, thanks in part to a strong-mayor form of government, political power amassed over decades, and deeper big-city resources. In order to produce a first-rate plan, Chicago sought out and obtained large in-kind and financial donations to fund it – another behavior Austin could emulate.

Chicago also has benefited from a far more hospitable state political and business climate. Gov. Rick Perry and his Texas oil-and-gas industry cronies still portray global warming as an unproven theory, despite global scientific consensus to the contrary. While Gov. Rod Blagojevich, impeached in January, proved his own kind of embarrassment for Illinois, he did establish aggressive statewide greenhouse-gas reduction goals back in February 2007, launched a state government program, and helped Illinois become the second U.S. state to join the Chicago Climate Exchange, a commodities market where greenhouse-gas emission credits are traded like pork bellies.

But according to a March 22 article in the Chicago Tribune, the Windy City has some green egg on its face. While our plan may not be as pretty or comprehensive, Austin Energy has done a far better job of obtaining renewable energy that truly reduces emissions. In Chicago, city government had to purchase carbon credits to meet its pledges to the Chicago Climate Exchange; it had promised to cut emissions by 4% between 2003 and 2006, then another 6% between 2007 and 2010. The Tribune reported that while Daley promised to start buying 20% of the city's electricity from wind farms and other renewable sources, "more than two years after the deadline he set, the city continues to get nearly all of its power from coal, natural gas and nuclear plants."

So instead, Chicago has spent a half-million dollars on carbon credits – but those purchases have been criticized as doing little or nothing to actually reduce greenhouse-gas emissions. Carbon credits are allowable only for brand-new emission avoidances – programs or plants that didn't exist before. Yet Chicago bought 87% its credits from a wood-burning power plant that has been in operation for nearly two decades, the Tribune reported. Confusion and questions about verifiable carbon credits are widespread; nationally, tougher standards and rules will be needed if they're included in a federal climate cap-and-trade bill.

ACPP's Ester Matthews pointed to that controversy to explain, in part, why Austin has been slow to move on creating local programs for carbon offsets. Despite its successes on renewable energy, Austin Energy still may need to buy millions of dollars in carbon credits (as early as next year) to meet council-mandated goals and deadlines. But it's concerned about ensuring that any carbon-credit program it creates or patronizes truly results in fewer greenhouse-gas emissions to offset global warming.