… And tries to hide it 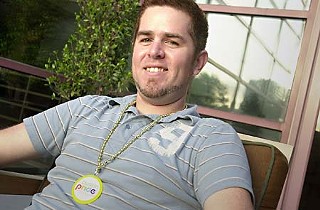 Basking in the warm rainbow glow of one of Austin's most successful Pride weekends to date, what would any self-respecting group in charge of the festivities do? Why, lop off the top of its leadership, of course.

Perplexing as that sounds, that's just what the Austin Gay & Lesbian Chamber of Commerce has done. According to its Tuesday morning press release: "President Jimmy Flannigan has stepped down and former executive vice-president Chad Peevy has taken on the role of president of the chamber. ... Flannigan resigned his position to pursue other interests and to focus on his own business, Site Street."

Flannigan's purported resignation was a shock, since the consensus of the LGBT community and beyond seemed to be that this year's Pride was not only a success but a great leap toward earning the public's trust in the AGLCC, a group that has long strived to live down its reputation as a too conservative – some say repressive – organization that was to be, for the first time, in charge of not only Austin's Pride Parade but all of the city's Pride festivals as well.

As it turns out, the gingerly worded press release didn't accurately represent what happened. "I'm disappointed that the new chamber leadership decided to mischaracterize my exit," said Flannigan on Tuesday. "My commitment to this community remains strong."

According to the newly seated AGLCC President Peevy, the board in fact had asked for Flannigan's resignation. "That press release was issued to save face for Jimmy," Peevy said. "There was very little organization that went into [this year's] Pride, and what did happen happened very late in the game," he continued. "And as we start thinking about next year and the level we want to take Pride – with a national headliner and in doing things more on a national scope ... if we're going to do that, then we're going to need a full year to think about it. We had no time to waste."

Yet according to the very same press release, this year's Pride was "one of the better organized and most enjoyable Pride celebrations in Austin to date."

"There is no question that what Jimmy did for this community definitely launched the chamber forward," conceded Peevy. "But keep in mind, this is a board; all of us worked to make this happen, not just Jimmy Flannigan. Our growth became stunted when relationships were put in jeopardy. Right now we have vendors who are asking for refunds." Peevy declined to reveal the number or identities of the vendors.

"Right now," said Peevy, the board has no plans to fire anyone else. At press time, the AGLCC released a revised statement acknowledging that Flannigan had not resigned but was instead voted out of office, an interesting first day's task for Austin's new AGLCC board. Look for continued coverage and full interviews with the involved parties at austinchronicle.com/gayplaceblog.