How did our legislators do?

Critics call him a liberal windmill-tilter in a conservative state, but the 38 bills he authored and co-authored that made it to the governor mean he's a progressive success.

After seemingly risking expulsion during the 2008 primaries, Dukes fought for every good cent that made it through the budget process.

After fighting for the state to take its crumbling infrastructure seriously, Watson made himself a Senate success with the slate of family issues bills he pushed through via bipartisan negotiations.

Rarely has any legislator so accurately reflected the political contradictions of his own district. His gun-love frustrates, but his bipartisan approach to electoral reform is peerless.

She won headlines by taking on the State Board of Education, but the sweeping health-care reforms in Senate Bill 7 she saved by folding it into her House Bill 1218 built up some serious political collateral.

The quiet visionary of the Travis County delegation turns radical and innovative concepts into solid policy but needs to move more prominently into the public eye.

Getting a new committee built around him proves he's a rising star; next session will determine how far he goes.

The sophomore lost bills in the session's grind, but when the Lege finally decides to deal with urban county affairs, her grasp of the issues will make her a leader.

Named freshman of the year by the Legislative Study Group, the Round Rock rep scored several local victories, obtaining more than $17 million in funding for higher education in her district and winning passage of a bill to let Taylor and Hutto draw on hotel occupancy taxes to pay for recreational upgrades.

Big wins included securing more oversight of the troubled state schools and directing $1 million to fund research at Texas State University. But on matters of concern to his aquifer-dependent Hays County constituents – local control and groundwater management – Rose struck out.

Gattis failed to land a leadership committee role – surprising considering his rising-star status in the 2007 session. His active promotion of the defeated voter ID bill was also viewed as political pandering.

The senior senator and budget leader lost political ground on key votes this session and, for whatever reason, waged a mighty defense of creationist State Board of Education member Don McLeroy, who was ultimately bounced from the chair's seat. 

The surprise new class president, Straus still needs to work out where the line between hands-off

The odd Tweet about his latest jog and behind-the-scenes threats about vetoes showed that even basic leadership skills evade him.

It may have been his hand on the gavel, but he left too much of the Senate's leadership to cantankerous Senate Finance Chair Steve Ogden. 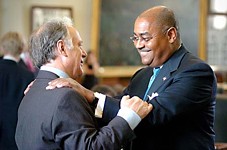 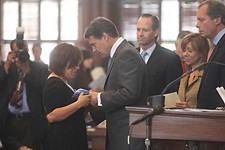