Kuempel bounces back, and Maldonado takes home a prize 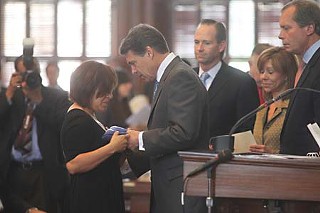 Gov. Rick Perry and state lawmakers paid tribute to families of fallen soldiers in a special ceremony May 30. (Photo by Jana Birchum)

• True to his word, Rep. Edmund Kuempel, R-Seguin, made it back to the House in time for sine die. Kuempel collapsed inside the Capitol last month, and on Monday he praised the staff at Brackenridge Hospital for his speedy recovery from a heart attack.

• In other health news, Rep. Rene Oliveira, D-Brownsville, is slowly regaining his vision after an accident forced him to wear an eye patch (sparking off pirate impressions on the House floor).

• After Sen. Bob Deuell's comments that Republicans must stop listening to the "black helicopter" wing of the party, he received a present: a remote control AH-64 Apache helicopter. Black, of course.

• Central Texas does it again: Round Rock Democratic Rep. Diana Maldonado was named freshman legislator of the year by the Legislative Study Group, which in 2007 presented the award to Austin Democratic Rep. Valinda Bolton.