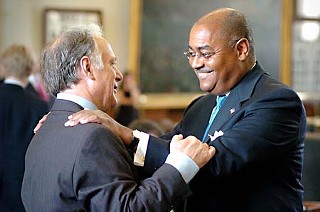 Sens. Kirk Watson and Rodney Ellis feel the love of the last day of the session. (Photo by John Anderson)

A week ago, the Texas Legislature was divided along party lines. But with sine die – the final day of the 81st session – come and gone, the fate of several state agencies and billions in transportation funds hang in limbo, setting the House and Senate at each other's throats and leaving a whisper of special session in the air.

Who wrecked the session? The House blames the Senate for poisoning the well back in January by suspending the rules to take up and pass voter ID legislation. The Senate blames the House for five days of delay tactics that Democrats used to keep that bill off their floor (see "Chubbing Republicans Over the Head," May 29). Hundreds of bills cratered, but matters worsened on May 29 when the House realized that the Senate was sitting on more than 400 House bills. A complex set of problems followed: House and Senate members whose agendas died as deadlines passed added their dead bills as amendments to other viable legislation. The biggest issue was whether the amendments were germane; if they weren't, any member could kill the entire bill on a point of order. How many had a problem? "Most of them," House Insurance Committee Chair John Smithee, R-Amarillo, said glumly.

In the crush, House Democratic Caucus Leader Jim Dunnam explained, both parties in both chambers agreed to be "lenient" on germaneness. Bills went to conference committee, differences were resolved, nongermane amendments were removed, and bills passed. On May 30, with little fanfare, both chambers approved the conference committee report on Senate Bill 1, the 2010-11 state budget. It's the only task legislators are constitutionally obligated to complete, and the last major legislation passed peacefully. 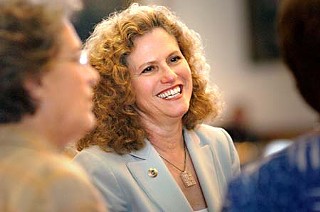 Despite the last-minute disarray in the House, Austin Rep. Donna Howard manages a sine die smile. (Photo by John Anderson)

The sticking point was Sunset. The Sunset review bills for several major agencies, including the Department of Trans­port­a­tion and the Department of Insurance, had not passed the House – partly because they had reached the floor so late in the process and partly because they had become vehicles overloaded with other bills. Without passage of the Sunset bills, the affected agencies are supposed to close by Sept. 1, 2010. An elaborate (but unsuccessful) plan was hatched to try to salvage the situation: dump the bills and just include those agencies in House Bill 1959, the Sunset Safety Net bill. That maneuver pushed the agencies' required reviews back to 2011 and moved the massive Health and Human Services Commission review back to 2013. But lawmakers missed the deadline for passage – 11:59pm, May 31.

House Democrats had similarly high hopes for the last-minute recovery of the limited Children's Health Insurance Program expansion that had been tacked on to Senate Bill 2080. (Rep. Garnet Coleman, D-Houston, explained, "It ain't dead until sine die.") But when Rep. David Leibowitz, D-San Antonio, talked out the clock, the House had passed neither CHIP nor the Sunset Safety Net.

On the surface, Monday (June 1) was a peaceful day in the House, filled with technical corrections to bills, congratulatory resolutions, and the traditional sight of members signing one another's commemorative posters. Behind the scenes, there were closed-door meetings struggling to save the Sunset Safety Net bill and maybe bring CHIP back up. The only obvious mechanism was to suspend the rules to bring them up, but a GOP mantra from the chubbing debate came back with a vengeance. "Either we have rules, or we don't," said Rep. Harold Dutton, D-Houston. So members tried another approach: The House crafted House Concurrent Resolution 291, which extended reviews for all agencies in the Sunset Safety Net bill until 2011 but did not include the Health and Human Services Commission review. Rep. Sylvester Turner, D-Houston, argued that using a last-minute resolution to amend statute set a terrible precedent, while Rep. Yvonne Davis, D-Dallas, said members "ought to be insulted that you call this a technical correction." But with desperation in the air, the House passed the measure, 111-29.

Around 6pm, the House called sine die and adjourned for the interim, hoping the Senate would approve of its last-ditch Sunset effort. Instead, senators were in an uproar. First, many shared Turner's concerns about the HCR 291 maneuver. Secondly, the House had failed to pass a senate resolution for $2 billion in TxDOT bonds. (House members countered that the same bonds were in their version of HB 300, the TxDOT Sunset bill, which the Senate failed to pass.)

Senators had been sniping at the House's pace all week but now exploded into outright criticism. For the majority of senators, failing to pass HCR 291 was a minor problem: Lt. Gov. David Dewhurst argued that Gov. Rick. Perry "can easily issue a decree to state his intention for [an] agency to go forward." More pressing was the $2 billion in bonds for shovel-ready projects and the infrastructure and jobs that depend on it (House members argue that the bonds would not be issued until nearly next session anyway, so there's no pressing need). Senate Democrats were equally concerned that a transportation agency in mid-Sunset won't be eligible for outstanding stimulus money.

Ultimately, and with almost three hours remaining before the midnight deadline, the Senate called sine die without passing either HCR 291 or finding a way to fix the bond issue. Now it's all up to Gov. Rick Perry, who said he's consulting with staff and attorneys to find ways to avoid the closure date for TxDOT and the Department of Insurance. As for bringing lawmakers back for a special session to fix anything else, the governor erred on the side of caution, noting, "It's way too early to be making any call."