On June 2, the family of Nathaniel Sanders II filed a federal wrongful death suit against Austin Police Officer Leonardo Quin­tana and the city of Austin, alleging in part that the officer used excessive force during a May confrontation with the 18-year-old that ended in his death.

According to the lawsuit, Quintana committed several "clear violation[s] of APD policy" in approaching Sanders, who was "sound asleep" in the back of a Mercedes station wagon in the parking lot of the Walnut Creek apartments just after 5am on May 11. The Sanders family attorney, Adam Loewy, said that Quintana followed the Mercedes into the parking lot without activating his cruiser's siren or lights – meaning also that he failed to turn on his car's video recording system. Quintana should have done both things – in part, said Loewy, because he was approaching a vehicle that he said he believed was involved in a serious felony, based on the allegation made by residents that the car had been involved in an incident of random gunfire several days before Sanders' death.

Loewy also said that an independent investigation by his law firm has turned up a number of eyewitnesses who will be "critical" to finding out the truth of what happened that morning. The Sanders family "believes that APD as a whole does a very good job" every day, Loewy said, but when officers don't "follow APD protocol, tragedies like this occur."

Two inquiries into the incident by APD investigators – criminal and administrative reviews – are pending, but Loewy said that does not preclude his filing a lawsuit based on an independent investigation of the facts. Indeed, notably, Loewy hopes that a judge will agree and order the city to disclose evidence and facts related to its pending inquiries – however unlikely that may be.

City Manager Marc Ott said in a statement that the city "remains committed" to a thorough investigation of the shooting and will "share appropriate information with the public as it is available." The filing of the wrongful death suit "does not change the way" the city or police department "will investigate the case" he said.

Sanders' father, Nathaniel Sr., said that his family simply wants to know the truth about what led to his son's death. "How," he asked during a Tuesday press conference, "do you go from asleep in the back of a car to shot dead?" 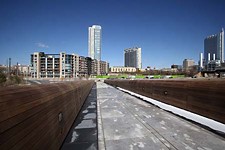