The recession has hit at KLRU 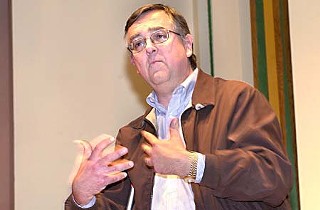 KLRU General Manager Bill Stotesbery can easily explain why the public broadcasting affiliate is facing an almost $1 million shortfall in its budget. The economy crashed. Corporate sponsorship dried up. All broadcasters are struggling, he notes.

Tougher to explain is why last September, with the economy about to implode, KLRU management approved a $9 million budget for 2009, projecting a $376,000 increase in revenue. At the time, the station had just posted a $354,000 loss for its 2008 fiscal year. "We felt the revenue would be there," Stotesbery said. Instead, unable to come close to the projections, the station earlier this month jettisoned almost 20% of its staff, dropped overnight programming, and "suspended" Docubloggers, one of its few remaining local shows. Management also agreed to take pay cuts, between 5% and 20%.

What's left is a public television affiliate with little ability to produce new local programming, unless a show can pay for itself, a review of KLRU's finances reveals. On the station's already skimpy local schedule, Texas Monthly Talks and Central Texas Gardener survive primarily due to the loyalty of their sponsors. In Context, which previously focused on architecture, design, and "all things strange and beautiful," has been recast as a sponsor-friendly "series of specials featuring local arts organizations." KLRU's website still lists Downtown and Paul Stekler's Legislature show, Special Session, among its "KLRU Pro­ductions," but neither is actually in production.

In KLRU's newly revised $8.4 million budget, only $224,000 is slotted for local programming. The bulk of the station's $1.7 million programming budget pays for Charlie Rose, The Lawrence Welk Show, Nova, and the other national programming aired by the station; education and community services account for about $365,000. Contrary to perception, KLRU has not faced a huge increase in its programming costs; the budget for national programming was up only $76,000 from 2007 to 2008.

The biggest slice of KLRU's budget goes to labor. The original 2009 budget called for $2.5 million for production – primarily the staff to produce Austin City Limits, pledge specials, and the occasional events aired by the station – which was actually down about $100,000 from the 2008 budget. About $3.2 million was designated for station administration, development, and marketing. Even after taking cuts, the top five managers earn a total of about $495,000. (Over the last three years, Stotesbery has cut his own salary from $170,000 to $140,000.)

A few days before last week's cutback announcement, KLRU management settled a six-month negotiation with the Texas State Employees Union, which had picketed the station twice in recent months. The union, which represents production employees at the station, ratified a deal calling for raises of about 5% and arrangements about meal breaks and overtime. But three members of the union's bargaining team were among the employees laid off earlier this month.

"The 20 percent staff cut was deep," said Mike Gross, vice president of TSEU, which is part of the Communication Workers of Ameri­ca. "The station did not have a bloated staff."

Going into FY 09, management anticipated about a $240,000 increase in membership contributions, as well as a $123,000 bump in major donors and underwriting grants. Instead, pledge-drive revenue is down about $100,000, and foundation and corporate money has dried up. Local programming, projected to raise $230,000, has only generated $65,000. Even DVD and CD sales for Austin City Limits have slowed, Stotesbery said.

In fact, times are tough all over for public broadcasting. Public TV and radio stations could see a $418 million, or 14.6%, drop in revenue this fiscal year, according a recent estimate from the Corporation for Public Broadcasting. Last year National Public Radio announced a $23 million projected shortfall, $21 million more than its initial projection.

A few months ago, Austin flagship public radio station KUT-FM sliced about $120,000 from its budget, primarily by postponing equipment expenditures, cutting travel, and not filling open positions. KUT, a money-raising machine, is bolstered by a national fundraising group, Public Radio Partners, which has generated about $10 million in sponsorship sales for the station in the last five years. KLRU doesn't have access to that type of program and, in essence, works without a safety net. The station doesn't have a cash reserve. Back in 1998, management announced a strategic plan to create a $10 million endowment by 2008, but it never happened. There is an endowment of about $1.2 million, but the station can't touch it until it reaches $2 million (and its value has actually dropped about 20% with the slide of investment markets).

"At this point we are obviously going to be limited in what we can do," Stotesbery said. But he says KLRU remains dedicated to local programs and community initiatives, as well as public-affairs shows, such as the recent mayoral debate hosted by the station. KLRU is expanding its digital channels and Web presence. Upcoming specials feature Ballet Austin and the Austin Lyric Opera. "Local production is critical, and we are no less committed to doing it," Stotesbery said. "We just have to look at the cost situation." He points to The Biscuit Brothers, the independently produced children's show that airs on KLRU, as an example of how the station can help a series without financing production. "We have to work harder on how we deal with the creative community," Stotesbery said.

However, the station's situation is likely to get worse before it gets better. Even after the cuts, the revised budget for FY 09 anticipates a $330,000 shortfall. And AT&T has indicated it will not renew its annual $450,000 in funding for Austin City Limits.

Coverage of the cuts and a fawning editorial in the Austin American-Statesman helped generate about $14,000 in Web donations in the days following, but that will barely make a dent in the budget woes. Last month, the station hired a new senior vice president of development, Betsy Gerdeman, a PBS veteran who was most recently vice president of "community engagement" for the Interfaith Ministries for Greater Houston. She says the station is planning a new approach to underwriting and a renewed focus on grants.

One initiative sure to annoy viewers: KLRU is already planning to increase the number of pledge-drive days.