Sunset Comes in Many Colors

How agencies are faring at the Sunset Advisory Commission

Tweet
print
write a letter
Once every 12 years, every state agency goes through a Sunset review to see whether it's still doing a good job and if the job still needs doing. Except for the state budget process, it's the largest act of legislative oversight of the executive branch in Texas, said Sunset Advisory Commission Chair Carl Isett, R-Lub­bock. But how effectively does Sunset work, and how far has its remit been extended?

This legislative session, 27 agencies are in review. Over the interim, Sunset staff made recommendations on each agency, the 12-member commission (five senators, five state reps, and two public appointees) voted on those recommendations, and then the House and Senate turned the commission decisions into bills. So now the fates of those agencies, from headline-grabbing institutions (Department of Public Safety) to obscure bodies (the board of directors of the Official Cotton Growers' Boll Weevil Eradication Foundation), lie in the hands of legislators. Sunset Commission member Rep. Lois Kolkhorst, R-Brenham, admitted, "Through Sunset, you find a lot of different agencies you never knew existed."

In theory, review allows agency cleanup and accountability, but the process has suffered mission creep. "You saw that in the [Texas Department of Transportation] bill," Isett explained. "Just because the Transportation Code was open, everyone wrote amendments, and all they had to have was 'Transportation Code' in the title."

Kolkhorst called herself "a purist" when it comes to the Sunset process but said she understands why legislators co-opt it. "At this point in the session, a lot of their bills are dying in Calendars or are stuck in committee," she said. "You work with some of that, but you always do it in the context of, 'Does this improve the agency?'"

The process is time-consuming and can be overtaken by the 140-day session. For instance, House Bill 2730, covering DPS, didn't make it to the floor until May 13, when the House was already swamped with bills facing vote deadlines. As an admission of the pressing hour, Kolkhorst ripped out controversial driver's license reforms. If she hadn't, she said: "We'd probably still be debating. ... This is a troubled agency. We need to be concentrating on [that] and not let that bill die because of something procedural."

Sometimes the final Sunset bill ignores staff and commission recommendations; while that's partly attributable to "special interests," said Isett, he also pointed out, "That's why we call it the legislative process, not the legislative event." Take the Texas Youth Commission: Sunset members voted 6-5 for a staff recommendation to merge it and the Texas Juvenile Probation Com­mis­sion. But two of the nay votes – Sen. Chuy Hinojosa, D-Mission, and Rep. Ruth Jones McClendon, D-San Antonio – carried the new Sunset bill, leaving the two agencies separate. Isett credits that final decision to the success of reforms mounted last session, "ensuring a seamless system of increased sanctions for juveniles who break the law, up to hard incarceration but all the way back to reintegration into our communities and our homes."

Legislators also rejected staff's recommendation to dissolve the Residential Con­struc­tion Commission, widely condemned for setting developer profits above homeowner protections. Staffers wrote in their report, "People do not trust the regulatory processes to protect them from unqualified builders who should not be in business." What Sunsetting achieved, Isett said, was what the original establishing legislation failed to achieve four years ago: to create a "dispute resolution process that is equally balanced for both parties." It may not be the letter of the staff report, he says, but it keeps the spirit.

Not every agency survives. If the Legis­lat­ure doesn't pass a Sunset bill, the agency in question automatically dissolves, and several, such as the Texas-Israel Exchange Fund Board, will disappear this year. Generally it's because there's no solid argument for a stand-alone agency. For example, the Polygraph Examiners Board had only two staff members, a $103,000 budget, and a record of dysfunction ("DPS had to do an open records request on a board that is housed in their own agency," said Kolkhorst) – it will now become part of the Department of Licens­ing and Regulation. But these are small operations. Several major agencies, including DPS and TYC, have had long-running and seemingly systemic problems. Which raises a major question for the Sunset: Are some agencies just too big to fail?

Isett argues that it's not about agencies but policies and priorities. "We're going to keep building highways; we're going to keep keeping the streets safe; we're going to keep regulating insurance," he said. As long as those needs remain, he said, Texas will require a TxDOT and a DPS and a Department of Insurance, "so we make recommendations to make [them] more efficient." The value of the Sunset process, he added, is the process. "We set the course and speed; they make it happen." 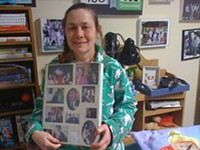 Guardians Fight On to Save SSLC
Following Senate vote to close SSLC, guardians turn to House for hope