Bicycle Master Plan Gets a Tune-Up

If it's May, it must be Bike Month 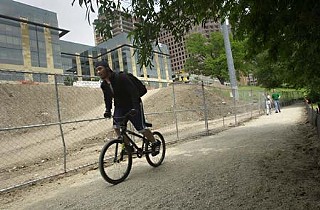 May is Bike Month in Austin and nationwide. With a slew of events happening throughout the area intended to get more folks riding bicycles for fun and transportation, it's fitting that the city is just one step away from finalizing updates to the bicycle master plan. Last Tuesday evening, May 12, both the Planning and Urban Transportation commissions voted unanimously to approve the Austin 2020 Bicycle Plan and its mission to "transform Austin into a world-class bicycling city." The plan now goes to City Council, which will consider a vote today, Thursday, May 21, at a 6pm public hearing.

More than two years in the making, the Austin 2020 Bicycle Plan is a testament to the public process. Not only was input solicited from the general public in 25 open meetings across town, but the plan draws heavily from the work over the past year of the city-organized Street Smarts Task Force, which tapped representatives from several city departments, Texas Department of Transportation, law enforcement, medical providers, urban-planning groups, and the bike community to draft and ratify a broad set of recommendations to "facilitate bicycling as a viable transportation choice."

The 2020 Bicycle Plan refreshes Austin's existing bike plan, last updated in 1998. The new plan calls for 400 additional bike-lane miles, with 900 as the ultimate goal. Gordon Derr, Austin Transportation Division assistant director, said an estimated 1% of Austinites (or approximately 3,500 people per day) now commute by bike. The 2020 plan seeks to double that figure by 2015 and boost it fivefold by 2020 through educational and promotional efforts and by utilizing creek rights-of-way and parkland to build off-street bike paths for traffic-shy novice cyclists. It also lays out national and global best practices for improving accident avoidance, recommends signature facilities such as car-free bike boulevards and shower stations, and sets detailed benchmarks and timelines.

At a cost of $250 million over its 10-year life span, the plan is comparable to measures passed in Seattle and similar cities, said city Bicycle Program Project Manager Annick Beau­det. While federal transportation and stimulus package cash is being sought, most funding is expected to come from a 2010 local transportation bond, Beaudet said.

Find the full bicycle plan, the Street Smarts Task Force report, and a map of existing bicycle routes at www.cityofaustin.org/bicycle. For a calendar of Bike Month events, visit www.austincycling.org/bikemonth.

Working the Budget
Council and staff review the preliminary numbers, with crossed fingers all around