Developing Stories: Chipping at the Waterfront 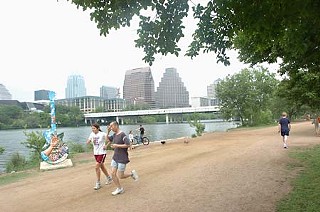 Should special planned unit development rezoning be allowed to alter the protections for Lady Bird Lake shoreline provided by the Waterfront Overlay Ordinance?

That much-debated issue may be resolved when the revised Waterfront Overlay Ord­in­ance returns to City Council today, Thursday, May 21, most likely for final combined second and third readings. When council provisionally passed the ordinance on first reading, Laura Morrison and other members advocated for setting a higher standard for PUDs, if they are allowed to trump ordinance regulations – particularly reinstated height limits. Lead ordinance sponsor Mike Martinez, while on a tour of Barton Springs trees last Friday, commented, "I don't know where we'll end up, but council is moving toward putting more restrictions on PUDs and [planned development agreements] – either limiting height to 96 feet or requiring a supermajority." PUD zoning requires a project to be scrutinized and approved by council; a supermajority requires six council votes, not four. In addition, said Morrison, "I have asked folks in the development community to brainstorm about other options" for higher standards.

Although often vilified as an evasion of conventional zoning, PUD zoning is not an innately bad idea. Its intended purpose is to promote better projects on large tracts, by allowing "superior" treatments that utilize intelligent urban design to achieve otherwise unattainable community benefits. (The name "planned unit" refers to a site plan that treats holistically a multitract or element project.) But because a PUD allows exceptions from all other zoning restrictions, developers sometimes apply for PUD rezoning so they don't have to follow the rules in place. (The CWS shoreline condo towers that triggered the Waterfront Overlay Ordinance revisions also ended up with PUD rezoning.) That has made PUDs notorious as a nasty loophole.

"You can get around anything in a PUD," argues Danette Chimenti, a Waterfront Overlay Task Force and Parks board member. Recently contested PUD projects include Wildflower Commons in Southwest Austin, the Grayco South Shore District PUD, and the Lakeshore PUD; by contrast, appropriate uses for large mixed-use developments include the Domain PUD and the Mueller PUD.

In addition to requiring a supermajority vote, council could ensure a higher standard by requiring PUD applicants to submit a detailed urban design plan for large, complex projects. The long fight over the East Avenue PUD (for the redevelopment of the Concordia University campus, recently rechristened "University Park") was only resolved when a vague "bubble diagram" plan was replaced with a detailed urban design framework plan. (See "Developing Stories," March 30, 2007.) Yet the "SuperPUD ordinance," passed last year and intended to prevent such fights in the future, requires a higher level of community benefits – but not a detailed urban design plan. Incorporating that requirement into the PUD ordinance was recommended by Jana McCann of ROMA Austin, who led the Concordia solution. (See "Developing Stories," June 6, 2008.) The fact that most Waterfront Overlay Task Force members oppose PUDs within the overlay indicates that last year's revisions weren't enough to earn community trust in PUDs as a tool for superior projects.

Jim Adams of ROMA says he's seen similar zoning work well without controversy in other cities, such as San Jose, Calif., where applicants must submit "an urban design scheme, at a sophisticated level of detail" that communicates clearly what the project will be. If a requirement for an overall urban design plan were added – to either the PUD ordinance or the Waterfront Overlay Ordinance – it could prevent headaches and delays for all concerned on future PUD proposals.

Although not in the Waterfront Overlay, a small-site project on Barton Springs Road – also headed toward a council vote – exemplifies for many a "loophole" use of PUD rezoning to seek greater height. Where the Filling Station restaurant once stood, at 801 Bar­ton Springs Rd., Texas American Resources, an oil and gas company led by David Honey­cutt, wants to build itself a new 120-foot office building. But the Park PUD proposed is a single building on less than 1 acre. City rules say PUD zoning is intended for sites of 10 acres or more, with "large or complex developments under unified control, planned as a single continuous project."

The owner is seeking a PUD in order to be exempted from existing CS-1-NP zoning, which limits height to 60 feet. Compatibility regulations would further limit the height near homes. Arguing that the site is sandwiched between two office buildings – one 120 feet, the other 60 feet – the owner wants entitlements for a 120-foot building with a ground-floor restaurant. (Of course, instead of seeking a PUD, Texas American Resources could have applied to the Board of Adjustments for a variance.)

Agent Steve Drenner won Environmental Board support for the rezoning on May 6 by promising "superior" protection of East Bouldin Creek, which runs along the back of the property. The sweetener: extra erosion control and drainage improvements, plus three-star Green Building standards. That's not much to earn a doubling of entitlements, says Chimenti. Bouldin Creek neighborhood residents believe council should either deny the request or get more in return – even though the applicant had the rezoning application submitted under the old, weaker PUD rules.

"You are setting a precedent for future mini-PUDs," Bouldin Creek resident Cory Wal­ton warned the Environmental Board. Walton, who is vice president of the Austin Neigh­bor­hoods Council, was also a member of the stakeholder group that drafted the revised PUD ordinance. He was unhappy with the result, largely because it allows council members to override any of the standards established (such as the 10-acre site minimum).

For the Park PUD, city staff recommended against PUD rezoning, as it is inconsistent with the Bouldin Creek Neighborhood Plan – which specifies that buildings on the south side of Barton Springs Road should not exceed 60 feet. Whether the Planning Commission (considering the case June 23) and council members will want to ink the Environmental Board's precedent in this PUD-charged atmosphere remains to be seen.