Local legislators fill us in on how some of their key bills are faring. 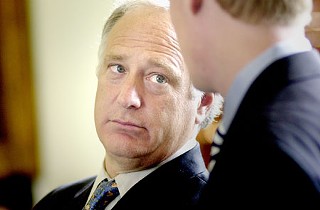 Kirk Watson, Senate District 14: Coming out of a hard-fought Senate floor victory May 11 for his successful renewable energy proposals in Senate Bill 541, Watson was upbeat about this session. "There's not much I'm standing on the sidelines saying, 'Woe is me.' ... We're in pretty good shape overall with our agenda, if we've been able to get hearings on it." Not that no hearing means a reform is dead. When SB 541 (proposing a study of property-tax "circuit breakers" so that people aren't taxed out of their homes) stalled, Watson got it tacked onto another bill as an amendment. Now he's working on his packet of budget accountability bills and said he's looking for "opportunities for us to discuss or debate those transparency issues." Meanwhile, state reps will be looking to him to protect their House bills now reaching the Senate, and that's still only half of the rest of his session. As vice chair of the Trans­porta­tion & Homeland Security Com­mit­tee, he'll take a lead on bridging the gaps between the House and Senate versions of the Texas Department of Transportation Sunset bills and examining the House changes to the local funding options in SB 855. "Transportation is far from over," he warned.

Jeff Wentworth, SD 25: As the only Republican in the Travis Co. delegation, Went­worth – whose San Antonio district includes parts of South Austin – is often the odd man out, pushing law like SB 1164, the unpopular "guns on campus" bill. But Dems are more supportive of SB 315, establishing a bipartisan Texas Congressional Redistricting Com­mission. "I lost one vote at third reading, so it's kind of stuck right now. I'm hopeful still, even at this late time, I can get that through." That's part of a slate of electoral and constitutional bills he's still pushing, like SB 1618, mandating single-member City Council districts for Austin. The council calls it state-level interference in city business, but Wentworth blames their failure to act. "They told me two years ago that they'd rather I'd not introduce it, that they would do it at the local level, and they didn't," he said, adding he'd rather the city hold a single-issue referendum instead of tying it to another issue like campaign finance. "If they had that kind of election, I believe Austin would say, 'Yes,'" he said. As for SB 315, the clock is ticking. To have the new commission in place for the 2011 redistricting, he says, "we have to do something in the next three weeks."

Dawnna Dukes, House District 46: Back under ex-Speaker Tom Craddick's dictatorial rule, Dukes staked her political career on retaining her Appropriations Committee seat. While some called it a Faustian deal, keeping that seat this session means she can fight to keep programs funded. House Bill 873, her film incentives package, has been signed into law, but, she said, "The second part [is] making sure we get the funding in the appropriations bill." Her next project is less glamorous but essential: HB 2860 extends support for former foster kids up to the age of 21, which "will have a huge impact on those children who are aging out at 18 and falling through the cracks." She got $16 million for that into Article II of the budget, covering Health and Human Services – that cash, and possibly billions more, is under threat as the Senate slashes programs to pay for skyrocketing Medicaid caseload costs. Dukes said she resisted pressure to avoid tough debates by moving programs such as HB 2860 onto the Article XI "wish list" because it's really "a graveyard." With even Article II under pressure, she said, "Now you see why I was saying, 'No.'"

Valinda Bolton, HD 47: It takes a brave politician to tackle either taxes or property rights in Texas. As a member of the County Affairs and Land & Resource Management committees, Bolton deals with both. While she has some builder support for proposed development buffer zones in her HB 4175, she's already had word from the governor's office that HB 1508, restricting direct waste discharge into the Edwards Aquifer, faces a veto after developer opposition. "Everyone wants their property protected," she said, but not everyone wants to pay for it. Bolton has struggled unsuccessfully with HB 3477, which would allow the state's desperately underfunded emergency service districts to hold capped, short-term property-tax rate elections for equipment and infrastructure investment. The process, she admits, has been "so much more complicated than it needs to be." Unlike other tax-raising districts, emergency service districts can't hold bond elections, so their resources are overstretched. As populations grow in unincorporated areas (like much of her southwest Travis Co. district) and traffic increases, response times suffer. So why the holdup? Knee-jerk anti-tax sentiment. "The caption on the bill actually has 'ad valorem' in it," she explained. 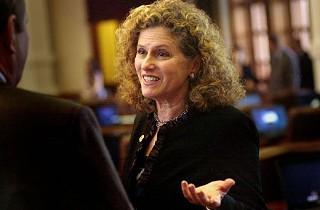 Donna Howard, HD 48: Howard landed a few headlines last week when her Texas grants reforms bill (HB 3276) got trampled. It prioritized college-ready kids for the grants; what made it to the Senate instructs the Texas Higher Educa­tion Coordinating Board to study the issue in the interim instead. The problem, she said, was long-running concern that "by having any additional criteria it would become about eligibility rather than prioritization." But she's landed a couple of body blows on the anti-science wing of the State Board of Education (see "SBOE: Grabbing McLeroy's Chair," May 8), and the former nurse is working to push through HB 3270 and HB 1218, working toward easier electronic sharing of medical records and prescription records between medical professionals – "fairly small bills in a sense, but they allow the big system to work." She's also optimistic about HB 770, continuing homestead exemptions in the event of a disaster. Although it sounds like a Hurricane Ike bill, she said, "it actually came from a constituent in the Austin area whose house had been flooded. ... If you lose your home in a natural disaster but it's still your homestead, it would be nice to claim that."

Elliott Naishtat, HD 49: With nine sessions under his belt, Naishtat is the dean of the Travis Co. reps, and that experience counts. He's already moved 13 bills over to the Senate – "Almost all of them to do with health and human services," he said. While he strengthens social service provisions, he also has a slate of capital punishment legislation, such as House Joint Resolution 58, proposing a constitutional amendment allowing the governor to issue 30-day reprieves on executions. But after facing "the governor's adamant opposition to being given the authority to declare a moratorium," he's pushing HB 877, calling for a commission to look into the state's capital punishment process. Even though "everyone knows that system is broken," he said, there's opposition. "My understanding is that someone on the Calendars Com­mittee has tagged it, which means that it may or may not come out." If it does fail, he said, "that will be a big disappointment." He's taking a longer-term approach to other bills, such as HB 164, his latest iteration of medical marijuana legalization. He noted, "You guys always refer to this as my perennial bill ... but I will introduce this every session until it passes."

Mark Strama, HD 50: Of all the Central Texas delegation, Strama received the session's biggest promotion, heading up the newly created House Techno­logy, Economic Development & Workforce Committee. "I wish it had been my idea," he said of his surprise appointment. "Amazingly, I had people looking out for me." He also doesn't underestimate its importance: Green-collar jobs and infrastructure construction are vital to the future of Texas and "right in the committee's sweet spot," he said. The downside is that because it's a new committee, there was a settling-in period, so he's already looking ahead to the 2011 session. "When you have an interim to prepare for a committee, you can prepare an agenda better than when you get the assignment when the session has already started." He already has targets, including extending broadband provision to underserved areas, commercializing university projects, and expanding pre-K teaching. "More than half the [Texas] Workforce Com­mis­sion's budget is federal child care, and that gives people the ability to work ... but we're not doing enough with those federal dollars to make sure those kids are in school."

Eddie Rodriguez, HD 51: Rodriguez filed a personal record number of bills this session. ("About 62," he said, "and I've passed quite a few.") Now he has five priorities, and he's realistic about their chances. His local-funding transportation bill (which would let municipalities assess local gas taxes for highway purposes) is "out of my hands now," he admits, since the Senate has taken the lead. But any disappointment is offset by some wins. HB 1912, which starts foster kids in the state's life-skills-building Preparation for Adult Living Program at 14 years old rather than 16, is with the Senate. So is HB 1029, allowing cities and counties to make affordable housing a requirement in public improvement districts. Unsurprisingly, that faced developer opposition, which Rodriguez expects to continue. But, he said, "It's important for Austin ... because we want the city to grow in a certain way." That leaves two big House fights: HB 4261 puts some of the $218 million in stimulus cash for the State Energy Conser­va­tion Office into "a zero-interest loan program for homeowners, small businesses, and places of worship to do weatherization, solar, or any other kind of renewable." He's more frustrated about HB 785, a transition bill for citizens with disabilities. "It's a great bill that goes hand in hand with the foster bill, but it's been held up for a month in Calendars, and I don't know why," he said.