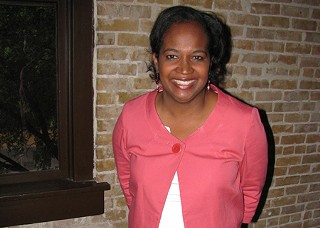 Place 6 incumbent Sheryl Cole is perhaps best known for her quiet, behind-the-scenes work tending to not-so-glamorous council tasks, such as chairing the Audit and Finance Committee. But on Saturday night as she greeted well-wishers at Sixth Street foodie haven parkside, she was quite comfortable in the spotlight, having roundly beaten opponent Sam Osemene with 83% of the vote. KAZI 88.7FM programmer Steve Savage was on hand with a chilled-out, jazzy backbeat; waiters served upscale comfort food (including Cole's fave, the crab cakes); and Cole's mother, Lela Elson, sat with family friends on the balcony, watching the sunset. As Cole's teenage son popped in and out with friends in tow, so did guests making the election-night party circuit, among them Rep. Lloyd Doggett, fellow Council Member Laura Morrison (last year's Osemene opponent), and Alamo Drafthouse owner Tim League, a vocal supporter of mayoral candidate Brewster McCracken. "The election is Lee's to lose," Cole noted as she eyed the mayoral returns favoring Lee Leffingwell over McCracken, the member whose votes have often aligned with Cole's. Come June, at least in the short term, Cole may spend some time looking for new allies.

A Council United?
Council gets a new mayor pro tem