Lege prepares a state budget saved by the feds – so what happens in 2011? 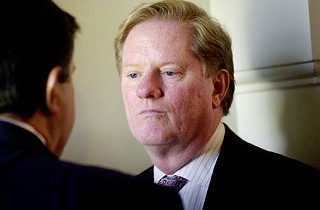 Under the Texas Constitution, the Legislature has only one required task: to pass a state budget. Lawmakers plan to have the final version of the recommended expenditures for the 2010-11 biennium ready by mid-May, and the plan is to maintain the bare-bones spending of the last decade.

But do they have the cash even to do that?

A quick recap: During the interim, the House and Senate each submitted its priorities to the Legislative Budget Board, which turned each list into rival budget proposals. Then there were debates in the House Appropriations and Senate Finance committees and floor amendments to the House version (475 offered, more than half adopted). Now five lawmakers from each chamber are laboring to create a consensus – or split the difference – between the House's $178 billion proposal and the Senate's $182 billion plan. Work groups began meeting last week, and the full committee met May 4 to discuss Article I (general government) and Article IV (the judiciary). House Appropriations chair and conferee Rep. Jim Pitts, R-Waxahachie, explained, "Every day we'll be reporting, then we'll have some pending items, so we hope to be finished by the 14th."

That $4 billion gap won't be resolved simply by slashing programs. The Legislative Budget Board's handy overview primer of the current differences runs 15 pages, representing a substantial number of core policy distinctions. For example, the Senate wants $491 million to continue the state's teacher incentive pay program; the House prefers to abolish that program and instead put $341 million for teacher compensation into the Foundation School Program. So that choice is less about how much to spend and more precisely about whether selective bonuses – or a livable wage – attract and retain good teachers.

Each budget has good and bad provisions. Eva DeLuna Castro, senior budget analyst for the Center for Public Policy Priorities, notes that the Senate's Medicaid proposals draw down more federal matching funds, but the House puts more cash into foster care and child supportive services. There probably won't be major cuts in conference; however, Castro added, "while you may see the budget go up by billions [in spending], it's barely going to keep [the programs] we have going."

There are always some potential items on the chopping block: Consider the budget's Article XI, traditionally nicknamed the "wish list." In passage through the House, members moved a large number of programs there from dedicated articles, swelling the wish list from $14.5 billion to $20 billion. While those programs face a dim future, Pitts said, "We're looking at everything to see what we can do."

Does it make a difference that the House got a 149-0 vote for its version of the budget and the Senate, which traditionally also passes its budget unanimously, split 26-5? Announc­ing the Senate conferees, Lt. Gov. David Dewhurst made an implicitly dismissive reference to the nay votes, noting that he hoped the final budget would reflect "a majority of our members' priorities." Pitts diplomatically deflected any "us vs. them" position, saying, "We'll both [both houses] be working together for what's best for Texas."

Of course, this all depends on having the money. The comptroller's office is standing by its January revenue estimate that projected little or no revenue growth over the biennium. Spokesman R.J. DeSilva said, "We took into account the economic climate and the downturn, and the trend continues in line with what we expected."

Yet for a growing state, costs continue to rise. That means, frankly, that the budget coming out of the Lege is held together with federal stimulus money. Pitts makes no bones about where Texas would be without the stimulus funds. "I've been involved in cutting a budget pretty seriously before," he said, "and we would be doing that today if we didn't have the federal stimulus."

House Democratic Caucus Chair Jim Dunnam, D-Waco, chaired the House Federal Eco­nom­ic Stabilization Funding Select Committee. He's worried that, under the current budget proposals, the stimulus funds won't be very stimulating. "I think we should have used the money [for] its intended purpose where it was responsible to do so and not just supplant [other] funds," he said. Even setting aside whether that kind of substitution is bad policy, in some cases it may not be legal. "We're still waiting to hear from D.C. about the education funding," says Dunnam, "and whether or not what they did is going to be permitted."

So if the 2010-11 budget will rely on this one-time federal cash injection, what happens in 2012 and beyond? On that, Pitts and Dunnam agree: There's a structural revenue deficit that has nothing to do with the current economic climate. Even in a good year, with its current tax system, Texas does not and cannot levy enough money to pay for what it wants and needs.

What about the $9 billion "Rainy Day Fund," the state's savings account for hard times? Pitts says his record proves that he's willing to use the fund ("They can put that on my tombstone"), but between the stimulus and expected future deficits, he believes this isn't the right year. Critics fear that rather than filling the deficit, the fund will in effect just subsidize property-tax breaks scheduled for 2011. Pitts admits that had to be part of his long-term calculations. "I feel that, with the estimated structural deficit because of the tax bill, the [Rainy Day Fund] will take care of that [missing revenue]," he said.

Dunnam counters that the Legislature has no option but to reconsider that forthcoming tax break. "At some point, we're going to have to pay the piper for a very irresponsible tax bill from 2006 that, essentially, is going to break the state," he said. As for the Rainy Day Fund, he believes not using it for coastal reconstruction this year sends a bad message about its purpose: "If you're not going to consider a hurricane that devastates the coast of Texas a 'rainy day event,' then I don't know what is."

So what about the business margins franchise tax, "reformed" in 2007 to pay for the property-tax relief? It's been a double failure – it both produces too little revenue overall yet leaves small firms reeling under skyrocketing tax bills. With the second year's filings due on May 15, Comptroller Susan Combs announced that her office has learned from "the most common errors and misunderstandings from last year's franchise tax reports" to help small businesses this time. Meanwhile, an army of bills with exemptions for small businesses and start-ups has been filed. Even without those reforms, DeSilva said, "this year we're projecting $4.4 billion" in revenue – a $100 million drop from last fiscal year.

Conference committee member Rep. John Zerwas, R-Richmond, authored House Bill 277, sunsetting the franchise tax in 2014 and instructing the comptroller to come up with a replacement tax to fill the revenue gap. That proposal, he admits, is probably dead in committee, but the problems it would address will remain. "Legislatively, we know property-tax rates are going to go down," he said, "so we're going to have to figure out how we come up with the money if this is not the right way."

There's some fine-tuning of the tax base in the works – such as Senate Bill 855, which would give some counties and municipalities limited transportation fundraising powers, such as local gas-tax hikes. And there have been some cost-saving efforts – for example, the comptroller has been trying to cut agency spending via bulk-buying through the TxSmartBuy system. Similarly, there are hopes that proposed food stamp and Medicaid reforms will slash administrative costs while increasing enrollment. Yet while legislators are hoping that the eventual end to the economic slump will solve their problems, the structural deficit remains its own economic time bomb.

So what's the bright side? Well, says Dunnam, "The [federal] stimulus act has bought us two years."