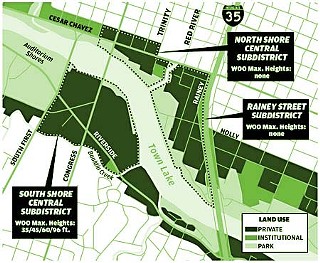 Storm waters continue to swirl around the redrafted Waterfront Overlay Ordinance, set for a possibly lively public hearing and still-uncertain council action at 6pm today (Thursday, April 30). The Planning Commission on Tuesday approved a "hybrid" version of the Waterfront Overlay Task Force recommendations and spent hours defining the role of the new Waterfront Planning Advisory Board, which is charged in the draft ordinance with "promoting excellence in the design, development, and protection of the City's waterfront." The same night, the Parks and Recreation Board approved 6-0 the Waterfront Overlay Task Force recommendations – which reinstate 1986 development height limits of up to 96 feet.

Strict protectionists – personified by Jeff Jack representing SaveTownLake.org on the task force – see the proposed board's role primarily as that of a watchdog limiting development. The Real Estate Council of Austin has argued against both reinstating height limits and a new oversight body. Unfortunately, neither side has advocated for the enlightened middle way: requiring good urban design that embeds community values in project master-planning and design. Yet the redrafted Waterfront Overlay Ordinance charges the board with establishing a vision that can "better realize the potential of the City's waterfront." Significantly, its members are being asked do far more than "just say no" to height and variances.

The advisory board's first job will be helping the city manager "to establish a system for providing development bonuses in exchange for community benefits." As city senior planner Robert Heil recently noted, the 1999 rewrite removed maximum heights from the ordinance because its language was supposedly muddled, but also because it was missing the "density bonus" system needed to earn any height beyond base zoning. The new ordinance before council reinstates exactly the same problem – temporarily. The Planning Commission added a timeline requirement that the new advisory board be appointed within two months and that bonus rules be developed within six months after the board is established. (The ROMA Austin team is well along on developing a density-bonus system for Downtown, which includes the urban north-shore subdistricts; the new advisory board can fast-track a lake-specific system by building on that professional work.)

Those critical of the amended ordinance accurately characterize it as looking backward. While it laudably incorporates the original 1985 Town Lake Corridor Study goals, in the subsequent decades, the city's priorities have changed. For example, it's now council policy to increase central-city and Downtown density and to reduce greenhouse-gas emissions through land-use planning. The total acreage within the Waterfront Over­lay is larger than that of Downtown and includes land more than 1,500 feet from the river, according to attorney Steven Metcalfe. So the simplistic notion that "height is the enemy" requires serious updating. Globally reinstating all the old height limits with this ordinance was a matter of correcting a historical wrong. But if council adopts the Waterfront Overlay Ordinance as redrafted, it should also free the new advisory board to reconsider height as it shapes urban design. Adopting this incarnation of the overlay must not preclude (as a separate task) vigorously defining the best course of action for Lady Bird Lake's future – this time looking forward, not back. 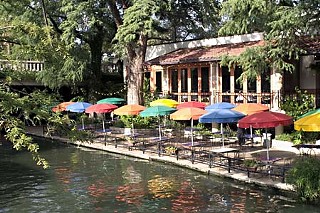 The new Waterfront Planning Advisory Board might advocate for people places with outdoor cafes, like this one on the San Antonio River Walk.

As reported in "Developing Stories," April 24, the Waterfront Overlay Task Force was convened with a narrow mission, to correct "inconsistencies and ambiguities," and that's done; its members (heavy on neighborhood-protection types) were not convened to create the waterfront urban plan of the future. Importantly, two task-force members (Michael Casias, an Eastside sustainable developer, and Jay Reddy, a Planning commissioner) dissented; two others (Dale Glover, Downtown Austin Neighbor­hood Association, and Brian Ott, Town Lake Trail Foundation) abstained, specifically from the 100% rollback to the old height limits. Pushing for a contemporary solution instead, Casias, Reddy, and Glover signed a minority report appended to the recommendations.

Their minority voices and others – including past RECA President Tom Terkel and attorney Metcalfe – have argued that height alone is an ineffective measure of a "good project." (They also argue that neighborhoods such as Travis Heights – with a self-interest in protecting their own views – were given too much power over a citywide issue.) They advocate for a more nuanced, 21st century formula to improve overall project quality – including the judicious use of taller, thinner buildings. "It saddens me that we jumped back to 1986 without securing a way to promote a balance of the highest quality design and the greatest level of public benefits," says Glover.

ROMA principal Jim Adams, who worked with an earlier Town Lake Waterfront Advisory Board on a plan for the area, encouraged a broader visioning process: "If the community is interested in seeing positive change on the south bank of the river, regulations alone will not be sufficient – particularly ones that do not provide sufficient incentive for property owners to change the existing land uses." (See "Planning South Shore Central: The ROMA Report," Jan. 19, 2007.)

To create, as Adams put it, "a world-class waterfront district" could require allowing some greater heights than the caps being reinstated, in exchange for community access and benefits – for example, opening up public access on the ground. Council Member Mike Martinez recently endorsed this idea, saying, "I am certainly open to individual projects coming to council that clearly demonstrate a better way to achieve community values."

Council particularly needs to give its advisory board the latitude to recommend master-planning and future code amendments for the most urban subdistricts, containing the most developable privately owned land. Those include Rainey Street, on Downtown's north shore, and south shore central.

What's critical now is for council to appoint to the advisory board the best-qualified Austinites – ideally, professionals with experience and knowledge of other successful waterfront preservation and redevelopment programs. The board's seven members (each to be nominated by one council member) are to be "drawn from the fields of urban design, environmental protection, architecture, landscape architecture, historic preservation, shoreline ecology, neighborhood conservation, civic art, and real property development." If instead the board is the same old adversarial mix of entrenched neighborhood advocates and self-interested developers, then a great opportunity to make good on decades of planning and visioning for the waterfront will have been lost.

For more information and to read relevant documents, visit www.cityofaustin.org/council/wotf.htm. Prospective Waterfront Overlay Advisory Board members should contact a council member or the city clerk at shirley.gentry@ci.austin.tx.us. 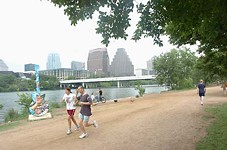 Developing Stories: Chipping at the Waterfront
The PUD controversy