Can school accountability measure save Pearce and Reagan? 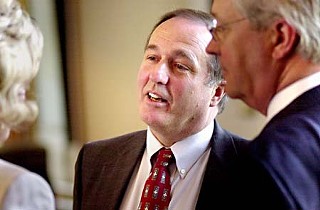 Almost two months after lawmakers rolled out their planned reforms to the school accountability system, the new and improved draft changes received unanimous backing from House and Senate. Now Austinites are asking if the reforms will save Pearce Middle School and Reagan High School from the threat of mandatory repurposing.

On Wednesday, April 29, the Senate passed Senate Bill 3 on a 31-0 vote, followed by House passage of House Bill 3 on a vote of 146-0. The original plan was for the two bills to be identical: But after lengthy public hearings on March 17 in which lawmakers heard extensive criticism of the original text, senators and representatives started their own rewrites, and the one bill with two numbers became two differently worded bills. The reforms will ultimately head to conference committee to hammer out the differences. House Public Education Chair Rob Eissler, R-The Woodlands, explained that Senate Education Committee Chair Florence Shap­iro "agreed that we needed to modify our bills, however, we needed to pass them through our respective chambers."

Both bills rebuild the accountability system, restructuring "what I'll call trip wires, because that's what people remember them as," said Eissler. Exemptions, which are part of the state education commissioner's code, will become law, so that a district can fail on 15% of measurements for each year and not be classified as "unacceptable." That said, no school can fail in the same matrix cell in two successive years. Secondly, schools will be graded on growth over a three-year rolling average, so if they're going in the right direction, they won't be penalized. Most importantly, if the finalized reforms pass both chambers by a two-thirds majority, they take immediate effect. That gives schools facing mandatory repurposing this year an extra year to rebuild. That's essential for Pearce, which is "where Johnston High School was this time last year," as Christy Rome, Austin Indepen-dent School District director of intergovernmental affairs, put it. She added that even if the bill does not pass, the reforms already in place will make the school reach the "academically acceptable" standard and avoid closure this summer.

That's good news for Rep. Dawnna Dukes, D-Austin, whose district includes both Pearce and Reagan. "There's been enough give and take," she said. But while she lost a House battle to end mandatory closure, Sen. Kirk Watson amended SB 3 so that the commissioner has the option to apply the reforms to failing schools. "It has an immedate impact on Pearce," he said.

There are still some differences between the two bills on how campuses and districts will be graded. Eissler feels that his version, which emphasizes the new distinction status for campuses, will be a selling point for members listening to their school districts. He explained: "Schools have complained that they're judged on their worst performing department. Here, with distinctions, you can get judged on your best performing departments."

So how hard will it be to get the two versions to match up? Rome said: "There are a lot of minor differences throughout that will be easily reconciled in conference committee, such as the House gives a little more discretion to the commissioner in terms of sanctions than the Senate does. The biggest difference between the two is in graduation requirements."

That's what may matter most to students. Both bills keep the new four-by-four system (four years of math, science, English, and social studies), with two years of foreign language and eight elective courses, leading to a Texas diploma (the proposal for two separate diplomas, one for students aiming for four-year colleges and one for students heading to the work force or two-year institutions, has quietly been removed). The big difference is in what's required to graduate: The Senate version requires passing two out of three tests in each of the four core areas, while the House version demands students pass Algebra II and English III.

Whatever emerges, Rome feels that the bills mark a significant step forward in what committee members understand about the real needs of public schools. She explained, "They spent the whole interim studying the topic of accountability, and they traveled all over the state, and they heard from people that this actually affects, and that helps." She added, "They get it."

Some Reforms Left Behind
Lege looks to account for school accountability

AFI Review: The Boy Behind the Door
Child abduction horror leaves the kids fending for themselves

AFI Review: Sound of Metal
The musician's nightmare becomes a catalyst for change