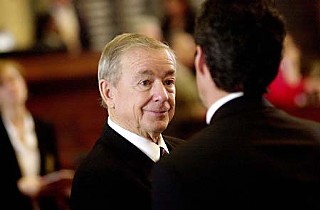 After some tough negotiations, conservative Rep. Warren Chisum withdrew his budget amendment that threatened to slice funding for Planned Parenthood and other traditional family-planning centers. (Photo by John Anderson)

After an all-night floor debate lasting into the early hours April 18, the Texas House passed its version of a $178 billion state budget – and it leaves intact more than $42 million in funds earmarked for traditional family-planning health services for low-income women. That's good news for women's health-care advocates who went into the debate worried that lawmakers would completely dismantle the care network, a proposal floated in a budget amendment by Rep. Warren Chisum, R-Pampa. "If the goal here is to just totally dismantle women's access to care," Sarah Wheat, vice president of community affairs for the Texas Capital Region Planned Parenthood, said before the debate, "then [Chisum's] done a great job."

The Chisum amendment would have completely rearranged the way the Department of State Health Services allocates funds given to family-planning providers – a reorganization of "funding priorities" that would have made the lowest funding priority a large group of providers that serve the vast majority of the more than 200,000 women who currently receive health care under the program. Not surprisingly, that group – which served more than 128,000 women last year – includes a number of Planned Parenthood clinics, and defunding Planned Parenthood (an ongoing pet project of right-wing lawmakers) was clearly the goal of the Chisum amendment. Though the state currently serves just 17.5% of the more than 2 million women in need of reproductive health-care services – often the only health care that low-income women receive – it appears that figuring out how to increase access to services is taking a back seat to that decidedly myopic goal. Indeed, in an April 16 e-mail to supporters, Joe Pojman, executive director of the Texas Alliance for Life, called on "friends" to contact lawmakers and urge them to vote for the Chisum measure "to defund Planned Parenthood from the state budget."

Legally, lawmakers can't be that direct. Instead, Chisum cobbled together a convoluted scheme for prioritizing which groups would receive funding, with top priority going to a group of providers that last year served less than 1% of women. The plan, said Wheat, would actually "make it most difficult for the providers who see the most clients day in and day out to get funding."

For now, at least, that obstacle has been avoided. As the debate rolled on Friday, lawmakers were negotiating how to handle not only Chisum's amendment but also a host of others – including one from Rep. Jessica Farrar, D-Houston, which sought to reallocate the $5 million that 2005 lawmakers shaved from the family-planning budget to pay for the so-called "Alternatives to Abortion" program, which funds unlicensed and unregulated crisis pregnancy centers tasked with "promoting childbirth." In the end, it seems lawmakers reached a truce: Both the Chisum amendment (and four others proposed by members of the Legislature's Conservative Coalition) and the Farrar amendment (and other similar measures) were withdrawn. "There was a whole bunch of bargaining that went on behind the scenes," said Fran Hagerty, CEO of the Women's Health and Family Planning Association of Texas.

The measures may be off the table for now, but anything could happen in conference committee, when select members of the House and Senate will work through the differences in each chamber's approved budget. Indeed, the family-planning budget can be changed in committee even if there is no difference between what is contained in each chamber's budget for the program. For now, Hagerty is optimistic. Family-planning advocates were able to line up supporters ready to debate fully the Chisum amendment if it had come up for discussion, and Hagerty believes the broad support for funding family-planning services sends a signal that providing for women's health care is not a controversial issue for most lawmakers. "People are over this, and they don't want to keep tying up time with [the] personal agendas" of a few lawmakers, she said. "Maybe I'm too optimistic," said Hagerty, "but that's how I like to see it."