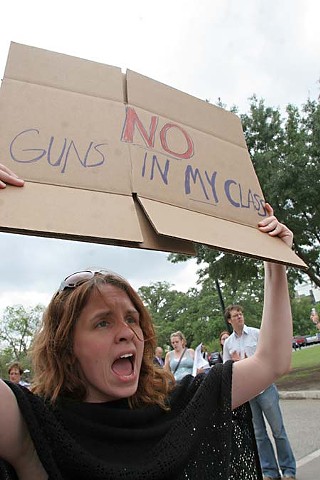 UT students and other opponents of a bill that would allow concealed handguns on university campuses staged a protest last week at the Capitol. (Photo by Jana Birchum)

With the sounding of 32 rings of the bell, legislators, law enforcement officials, and more than 200 UT students gathered April 16 on the south steps of the Capitol to mark the second anniversary of the Virginia Tech massacre in memory of the 32 students and staff who died in the shooting spree. But they were also protesting House Bill 1893, which would allow concealed handgun license holders to bring weapons onto university campuses.

Supporters of the bill, including the National Rifle Association, claim that overturning the existing ban on concealed firearms on campus makes everyone safer. But just about every UT student and faculty group, as well as the Independent Colleges and Universities of Texas and the Texas Association of College and University Police Administrators, oppose the measure, saying the high-pressure world of academia is no place for guns. Virginia Tech graduate John Woods, who lost a close friend in the shooting, argued that the reforms would not stop another campus massacre. He told the crowd: "The only reason this 'guns on campus' foolishness is gaining any traction is because people keep saying, 'Virginia Tech, Virginia Tech, Virginia Tech.' They're trying to scare you." Instead of guns making students safer, he warned, "lots of things that end up with a bloody lip could end up with a body bag."

Rep. Elliott Naishtat, whose district includes UT-Austin, the state's largest university, noted that 93% of violent crimes against students happen off campus ("where students are already permitted to carry handguns"). He attacked the idea that the current licensing process doesn't need strengthening. Virginia Tech gunman Seung-Hui Cho had several diagnosed mental disorders. With that in mind, Naishtat, who supports a full-campus gun ban, has filed HB 3352, which he said "would close the loophole in Texas law that allows people with diagnosed serious mental illness ... to have firearms."

HB 1893 is currently in the House Calen­dars Committee, and committee member Garnet Coleman, D-Houston, said he hopes it will stay there and never reach the floor. If it moves forward, Rep. Lon Burnam, D-Fort Worth, implored the demonstrators to stay active in their opposition. Along with fellow Longhorn Rep. Eddie Rodriguez, D-Austin, and Texas Southern University graduate Rep. Barbara Mallory Caraway, D-Dallas, Burnam voted against the bill in the House Public Safety Commit­tee and warned: "Every time we have any kind of nuanced little thing about handguns, the paid lobbyists for the NRA are there. All too often, we don't hear from people like you."