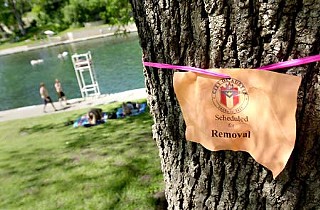 This year's Earth Day (April 22) arrived on the heels of grim news from City Hall: Some of Austin's oldest, grandest family members (28 trees at Barton Springs Pool) could get the axe. A city contractor's assessment targeted the trees, including this one, for removal, citing their aging fragility and potential hazards from falling limbs. City Council members are expected to hear from staff (they've already heard from angry constituents) at 2pm today, April 23. For details on the tree-removal plan, see www.cityofaustin.org. (Photo by John Anderson)

• ANOTHER BID FOR FREEDOM Lawyers for death row inmate Rodney Reed filed a final appeal with the Court of Criminal Appeals on April 21 seeking relief for Reed, who maintains he is innocent of the 1996 murder in Bastrop of Stacey Stites. In his latest appeal, Reed provides additional, detailed evidence about several sexual assaults allegedly committed by Stites' then-fiancé, former Georgetown Police Sgt. Jimmy Fennell. Fennell was never fully investigated in connection with the crime, though Reed's supporters say he was a far more likely suspect. Fennell is now serving 10 years in prison for the sexual assault of a woman in his custody while he was on duty. Reed's latest appeal provides information on additional, similar accusations against Fennell, including the alleged rape of a woman after Fennell had pulled over a driver she was riding with on a traffic stop. (For more on the Reed case, see "Who Killed Stacey Stites?" May 24, 2002.) – Jordan Smith 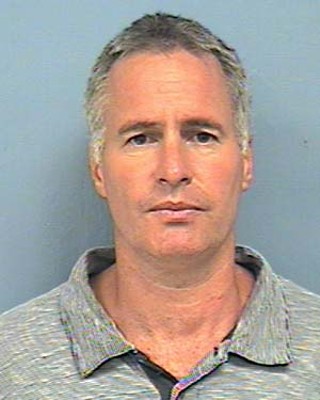 • PELLET PERP POPPED On April 17, Austin police arrested a 48-year-old man who they believe to the pellet gun perp responsible for firing rounds at motorists on Southwest Parkway several times since late 2007. Darren Inberg (pictured) has been charged with deadly conduct for allegedly firing a pellet gun randomly at cars driving west along the 5900 block of Southwest Parkway between 1 and 3am – hitting the personal cars of several off-duty Austin Police Department officers as well as a Bee Cave officer who suffered an eye injury after his car was hit in November. Police say more than 20 cars might have been hit during Inberg's pellet-popping spree. The Austin Police Department investigation is ongoing. – J.S.

• VAN BOVEN KEEPS WHISTLING ALONG Neurologist Robert Van Boven was ousted by the Department of Veterans Affairs, but he nevertheless continues to advocate for wounded soldiers. While his involvement with last year's Peace of Mind 5K ostensibly helped him get fired, Van Boven and RunTex plan to stage the event again this summer to benefit veterans with traumatic brain injury, a signature injury of U.S. soldiers returning from Iraq. "The purpose of this festivity and run is to ... give homage to those who have risked their lives in service to our country," Van Boven says. Van Boven worked as director of the VA's Brain Imaging and Recovery Laboratory in Austin from July 2007 until January 2009. His bosses at the Central Texas Veterans Health Care System accused him of insubordination by organizing the run after he was ordered not to. However, a VA attorney opined that Van Boven could plan the run as a private citizen, which he says he did. The charge was among about a half dozen the VA wielded to justify his termination. The real reason he was fired, Van Boven says, is that he uncovered fraud, waste, and mismanagement at the BIRL. The Office of Special Counsel is currently investigating the VA for possible illegal whistle-blower reprisals against Van Boven. (See "Shoot the Messenger!" Oct. 31, 2008, for more.) – Laurel Chesky

As expected, Marc Ott confirmed that the city is facing another budget shortfall. In a City Council meeting Wednesday to consider the city's economic outlook and five-year financial forecast, Ott said the city is facing a "significant budget gap that we will be challenged to close" for the 2010 budget. The shortfall is about $30 million, based on the "rollback" property-tax rate (a slight increase over last year and the highest the city can tax without triggering a special tax election). Staying at the current "effective" tax rate swells the shortfall to $40 million. Ott said he will ask city departments to submit their budget requests earlier this year so the council and staff will have more time to "generate budget reduction strategies." The next council budget work session is scheduled for May 20; the 2010 budget won't be adopted until September. – W.D.

No fireworks erupted at the April 16 rollout of plans for the new animal services center, which has sparked heated debate since City Council approved its construction at 7201 Levander Loop rather than Downtown. The meeting had officials and audience alike purring over the design, which provides for a modest yet aesthetically conscious and sustainable facility. New buildings will resemble the current one-story, flat-roofed structures on the property, the site of the former Texas Blind, Deaf, and Orphan School for African-American students (see "Naked City," Jan. 2). Bricks will be recycled from demolished structures, while the gym may be left standing, with its nostalgic, Forties-era Quonset-hut motif replicated elsewhere. Sustainable features will include solar panels and self-sanitizing "dog grass." Mature trees will dot an inner courtyard and outer quadrangle; animals will enjoy climate-controlled indoors and trellis-laced porches outside. Both dog and cat habitats will accommodate less-stressful group housing; rabbits will roam a bunny run. Concerns were expressed over a proposed montage depicting cats lunging at birds, and one citizen asked what this expanding Austin Health and Human Services campus will do for people, as well as animals. The second meeting is set for Wednesday, April 29, 6:30pm, at the Rosewood-Zaragosa Center, 2800 Webberville. See the shelter plans at www.cityofaustin.org/health. – Patricia J. Ruland