Austin politicos, take note: Until you're creating fodder for PerezHilton.com and London's Daily Telegraph, you really haven't made it. Local Democratic activist Ramey Ko achieved that mixed honor after testifying April 7 on behalf of the Organization of Chinese Americans to the House Elections Committee on Senate Bill 362, the voter ID bill. He was discussing the additional burdens of naturalized citizens whose birth names are translated differently on different documents, when Rep. Betty Brown, R-Terrell, thrust him into the spotlight. "Do you think that it would behoove you and your citizens to adopt a name that we could deal with more readily here?" she asked. The story, much to Ko's surprise, was quickly picked up by national and international news outlets, including Perez Hilton's Internet gossip site (where Brown's comments were filed under "Icky Icky Poo"). Ko said that while he does not think Brown is racist, the most telling moment was when she referred to "you and your citizens," he said. "There's a lot of entrenched ideas out there about who is American and who isn't." Brown has since apologized for her comments. 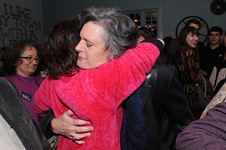 Then There's This: It's Our Turn Now
Women are ready to kick ass, take names, clean house