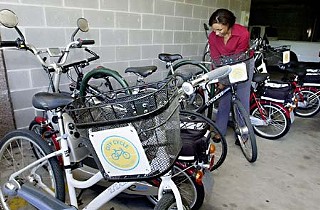 • Good News for Tecolote The meandering saga of Tecolote Farm got a bump in the right direction from Travis County commissioners and a host of others on Tuesday. Katie and David Pitre, who own and operate the organic family farm, have been lobbying for the county to provide them with water since their wells went dry – right about the time the county's high-volume pumps in East Metro Park went in. Under the new county resolution, University of Texas geology professor John Sharp will be taking his groundwater field methods class to the farm to do some extensive testing for potential sources of water. If they discover any probable locations, the county says it will pay for up to five test wells, costing roughly $5,000 altogether. Sharp will begin the testing in about a month. – Jacob Cottingham

• Barton springs Water-Pumping Moratorium Last week the Barton Springs/Edwards Aquifer Conservation District voted unanimously to implement a moratorium on freshwater pumping out of the Barton Springs segment of the Edwards Aquifer. BS/EACD General Manager Kirk Holland said that the moratorium came from "uncertainty in the overall joint groundwater management planning process." He also said it was unclear what the desired future conditions of the Edwards Aquifer would be and that the BS/EACD didn't want to have to "dig [its] way out of a hole" by restricting permits it had already granted. The moratorium will be in place until Septem­ber 2011 or until Groundwater Management Area 10 approves desired future conditions to guide long-term groundwater management. Jennifer Walker, the water resources specialist for the Lone Star Chapter of the Sierra Club, praised the decision. "The moratorium is essential to protect spring flow and the aquifer users during drought but also during nondrought times," she said. "I think the district has taken a very positive action." Holland said the moratorium gives them time to figure out what additional requirements, if any, may be needed to meet the desired future conditions. – J.C.

• Fennell Suit Settled The city of Georgetown has settled a civil suit involving former Georgetown Police Department Sgt. Jimmy Fennell Jr., who was sentenced to 10 years in prison on charges that he kidnapped and assaulted a woman in his custody. Reportedly, the city has settled with the woman for $100,000. Fennell was the fiancé of Stacey Stites, who was murdered in Bastrop in 1996. Another man, Rodney Reed, was convicted and sentenced to die for her murder. Reed has maintained his innocence, and his supporters say that Fennell was a far more likely culprit. Fennell found out that Reed and Stites were having an affair and was furious, say Reed's supporters. So far, however, Reed's appeals have been denied. (For more on this story, see "Who Killed Stacey Stites?" May 24, 2002.) – Jordan Smith

• 'Killer' Keller to Meet Her Master The Texas Supreme Court has appointed Bexar County District Judge David Berchel­mann to be the "special master" who will conduct a hearing on the alleged misconduct of Court of Criminal Appeals Presid­ing Judge Sharon Keller – charged by the State Commission on Judicial Conduct with "willful and persistent failure" to follow the court's execution-day procedures. Her failure to follow protocol in the case of death row inmate Michael Richard led to his execution without the court hearing his final appeal in 2007. Berchelmann, a Republican, also served on the CCA for three years – appointed to the bench by then-Gov. Bill Clements in 1989. Keller's hearing is slated to begin Aug. 17. – J.S.

U.S. Attorney Johnny Sutton sent notice last week to President Barack Obama officially resigning his post as top prosecutor for the Western District of Texas, effective April 19. Sutton worked in the Harris County District Attorney's Office before coming to Austin to work for then-Gov. George W. Bush on criminal justice policy. Among the names being floated as possible replacements is Travis County Attorney David Escamilla, who has worked for the office since 1989 and has held the top spot there since 2003. – J.S.