Too tough to choose?

The best City Council candidates usually run against one another, and in most cases there's nowhere else to go. With his previous City Council experience and solid progressive backing, Bill Spelman scared off all comers from Place 5; Mike Martinez faces only cursory opposition in Jose Quintero, while Sheryl Cole deserves a more formidable rival than libertarian-lite Sam Osemene – but both of these races are unofficially "reserved" for Latino and black candidates, under the city's cobwebbed "gentlemen's agreement." That means Perla Cavazos and Chris Riley must duke it out in Place 1, serving out the two-year remainder of Lee Leffingwell's unexpired council term. That's a shame, as the two candidates are equally strong and skilled, albeit in different ways. Their near-even split on endorsements testifies to their strengths, as well as the aspect of politicking the particular endorsees find most important: the personal or the policy.

A pretty clear delineation of the two candidates came about last weekend, at the unwieldily titled Urban Is Core Austin Super Forum. Sponsored by groups including the Downtown Austin Alliance, Austin Parks Foundation, and Austinist.com, the setting was home turf for urban-planning wonk Riley. (He founded the Downtown Austin Neighborhood Association.) On the stump, Riley's smarts and mastery of virtually any city topic are apparent and reassuring. For one instance, on the question of an urban rail circulator, Riley called it an "absolutely essential" component to successful public transit, then pivoted into the need for "housekeeping work" at Capital Metro – and specifically, his support for Sen. Kirk Watson's bill restructuring the organization's board – before deftly finishing with a call for an interim bond election to broaden Austin's transportation options. Riley's answer to spiking crime rates Downtown was similarly nuanced – calling for a Downtown community court to expedite punishment of crimes affecting quality of life in the central business district, coupled with community service sentences that provide a sense of "restorative justice" (e.g., punishing graffiti writers by sentencing them to clean up similar messes) and offering a shot in the arm to social-service providers to help address the disparities that drive crime. 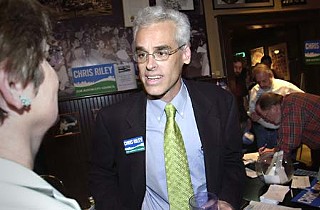 Cavazos, despite billing herself as a "public policy expert" on the campaign trail, might well admit she's not as deeply steeped in the intricacies of local issues as her opponent. Instead, her answers Saturday were long on Listening and Talking It Out. On a question regarding the necessity of Austin's long-promised Comprehensive Plan, she said the first step is getting "started on the conversation – what are our core values?" Similarly, her response to the question of circulator rail was predicated on plans to "speak with major employers" Downtown, such as the city and the state, to try to pool dollars for the costly project. Still, while the Downtown thrust of the forum wasn't exactly Cavazos' strong suit, she acquitted herself ably. (For comparison, you have to wonder if Riley would've done as well speaking with the Austin Tejano Democrats.) Therein lies Cavazos' strength: her ability to connect on a more personal and retail-politics level and impress as a stronger campaigner.

Which candidate deserves your vote, then, might largely be predicated on what you see as the central role of council members. Which is a more effective tool for driving the civic conversation: holistic, forward-thinking plans and policy or a representative audibly intent on acting with community consensus and conversation? (It's tempting to worry that Austin's "terminal democracy" – where good ideas die the death of a thousand task forces – would undermine Cavazos' earnest populism, but on the other hand, even the best policies aren't practical if they can't be enacted.)

What's readily apparent campaign after campaign, however, is that voters deserve better than a surfeit of talent and smarts in one race and effectively no choice in the others.