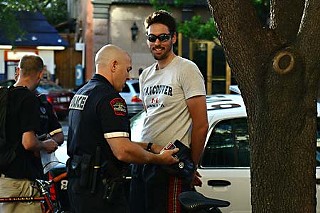 A little after 6pm on Friday, March 27, a couple in a yellow Hummer H2 thrust their heads out of their windows to scream at the more than 200 bicyclists moving through the Sixth and Congress intersection after the light had turned red. The scene was typical of the monthly Critical Mass ride, a leaderless group cruise that draws as many as 400 bicyclists. Similar rides take place in cities around the world, at times drawing more than 1,000 riders. Some participants view Critical Mass as a fun, DIY parade celebrating everything bike; others see it more as a show-of-force demonstration highlighting the inequity of bicycle infrastructure despite growing numbers of folks who bike for transportation. Either way, the Austin Police Department still views running red lights as a crime, and a few blocks from the Hummer encounter, two Critical Mass riders, James McCue and Nathaniel Hill, were arrested as the group breezed through another red light.

APD had received several calls that day with complaints that riders were blocking traffic. Typically, a few riders will break off from the pack and park their bikes in front of cars at intersections, blocking (or "corking") motorists so that the entire group can move through the intersection as one. Officer Jason Mistric, who made the arrests that day, told bystanders that Critical Mass' intersection blockage was a "continuous problem" and that "from now on, running a red light is not a ticket; it's a trip to jail." When an onlooker asked if Mistric enjoyed arresting people for this sort of thing, he responded, "Yes I do, thoroughly."

Surprised that McCue and Hill were arrested rather than ticketed, many riders wondered whether Mistric's actions were more power trip than policy. Bicyclists have been arrested during rides as recently as last year but only after disobeying or evading officers. Lt. Christian Malanka, a patrol supervisor for APD's North Bureau, said in an e-mail that "there are no directives or initiatives citing critical mass" and that "Officer Mistric examined the totality of the circumstances and determined that a custody arrest for the offense of Obstructing Highway or Other Passageway was appropriate in this incident. Based upon the observations of officers and established probable cause, the charges were in fact accepted."

"If cyclists stopped at every light, traffic would be 10 times as bad," says longtime local cycling advocate Michael Bluejay, who participated in Austin's first Critical Mass in 1993 and has been part of similar rides in San Francisco, New York, Prague, and London. "It's safer to keep the group together," he says. Bluejay was in Austin during the large-scale arrests of riders in the mid-1990s. During that time, he and other original Critical Mass participants started a "Courteous Mass" ride designed to follow all traffic rules. "It didn't fly," he says. "Turnout was very, very low."

Officer Mike Morgovnik, one of the 12 police officers summoned to the scene of the arrests in March, said it's his job to "think about the worst-case scenario." If one car unknowingly slips through riders' impromptu blockade, he said, it could prove tragic. As a bicycle cop, bike commuter, and avid road-bike racer, Morgovnik has a stake in how people perceive Critical Mass. "Ultimately, we want compliance with the law, and my goal is to get people to respect bikes," he said. "If all we're doing is pissing people off, we're not really achieving the goals of the ride."

After a Fashion
Stephen was never one for backpedaling