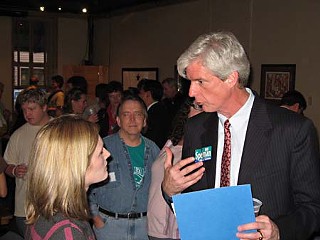 On the stump lately, Brewster McCrack­en's taken to name-checking unopposed Place 5 City Council candidate Bill Spelman. With the city financially strapped, McCracken says Spelman has echoed his call for police officers to turn down their next scheduled round of raises. "We don't know what the next budget year's going to look like," Spel­man told the Chronicle. "I think it's real likely that we're going to have to make further cuts. If we do make further cuts, we have to have a community conversation as to what's really a basic service, what we really need to fund and to do – and what is a luxury item that's a little less important, that we can put off doing for a couple years."

To Spelman, an additional raise for the police – already the best compensated force in the state – is a luxury. Still, that doesn't mean such a step would be easy: "Every time you renege on a contract, there are consequences," he says, noting that if the cop contract is broken and reverts to basic civil service requirements, "that means we're gonna lose a lot of the concessions we've picked up over the last 10 years. The police oversight board might be one of them, and I certainly wouldn't want to lose that." Still, Spelman says he's "not sure we're going to renegotiate the meet-and-confer [contract]," as he assumes the public safety unions, whose endorsements he has received, understand the city's dire financial situation. "This is what I told the public safety unions: 'If we have to make a choice between making good on those contractual obligations and laying off parks employees or librarians, I'm not going to lay anybody off.' And I think that may be the choice we have to make."

Hmmm ... focusing on the fundamentals, like public safety, parks, and libraries – could Spelman be sounding like yet another candidate in the mayor's race?

In an e-mail announcing its endorsements (Perla Cavazos in Place 1, Mike Martinez in Place 2, Bill Spelman in Place 5, and Sam Osemene in Place 6), the group noted, "Some opposing candidate camps are explaining our endorsements as for those 'willing to pander' to us," likely a reference to Strayhorn receiving the group's endorsement despite missing its candidate forum (except on video). "Is that because they see open government, fiscal prudence, and putting an end to the gravy train for special interests as 'lower tastes and desires' of the people of this City?"

Also on the Ballot in Travis Co.

• The creation of the Anderson Mill Limited District