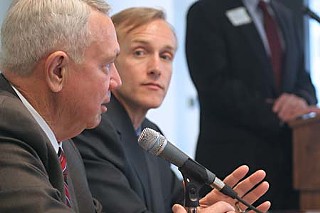 With apologies to Matt Groening, here are this election campaign's forbidden words: "Tough Times." "Renewable." "The Crow's Nest." "In It for You." And of course, "Hunker Down."

While it certainly ain't the Rumble in the Jungle, this week's theme was the Hunker in the Bunker. (Or as commenters at Burnt Orange Report rang the changes, to alternately "funker down," "dunker down," or "crunker down.")

The bickering began (calling it a "kerfuffle" suggests too much gravitas) when the Brewster McCracken camp threw up a YouTube clip called "Hunker Down," a greatest-hits compilation of Lee Leffingwell's public appearances advocating that very course during the downturn. For background music, BMc spokesman Colin Rowan used the song "Hunker Down" by Florida artist Captain Josh (found in a quick perusal of iTunes). The video was up briefly before the Leffingwell camp discovered it, contacted Josh Ramsteck (Captain Josh), and made a stink out of it. Rowan owned up to the mistake, and the campaign pulled the video, saying it was planning to do so anyway, as the joke had run its course. But the Leffingwell crew will host Captain Josh for a Lee rally, as CJ had previously scheduled Central Texas dates before Hunkergate erupted.

Advantage: no one. Don't you people have better things to do?

The intellectual property altercation, however minor, does mark an inauspicious start for McCracken's new bout of messaging, as he marshaled several Austin musicians (such as Jon Dee Graham and Sara Hickman) and club owners (Momo's Paul Oveisi and Mohawk's James Moody) Wednesday to endorse him in a presser at the ME Television studios. McCracken further burnishes his hipster credentials with a "guest bartender" spot at Mohawk, ratcheting up his plans to make up for his lack of established group endorsements with ad hoc coalitions of players in exciting fields like music, film, and tech.

Speaking of which, Mohawk is hosting this joint's first-ever mayoral forum. The Austin Chronicle presents the Hustle for Mayor, at Mohawk on Tuesday, April 21, at 7pm. Mark your calendars!