Equity firm specializing in 'distressed' properties looking at the daily 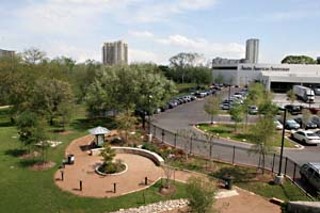 The Statesman's lakeshore location has drawn the attention of a potential suitor with an eye for handsome real estate investments. (Photo by Jana Birchum)

With its recent acquisition of The San Diego Union-Tribune, a Beverly Hills-based private equity firm emerged as a front-runner to buy the Austin American-Statesman. No details were available on Platinum Equity's deal to buy the floundering San Diego paper, but Mark Barnhill, one of the principals, confirms the company is ready to buy more newspapers. "It is typical for us when we enter a market sector to look at similar or complementary acquisitions," said Barnhill, "so it is safe to say we will be looking at additional media properties and newspapers, in particular."

Barnhill refused to discuss the Statesman, but his firm's willingness to close a deal on a newspaper – any newspaper – vaults it to the top of any speculation about the Austin daily, considering the lack of buyers for dozens of papers languishing on the market. Platinum is one of five groups that heard pitches from Statesman owner Cox Enterprises two months ago.

"I've heard nothing from Cox Enterprises since the bid deadline passed," wrote former Editor Rich Oppel, a member of one of those groups, in an e-mail last week. (Cox Media Group President Sandy Schwartz declined to comment on the mid-March deadline for bids, although he did reference "bidders," suggesting more than one group made an offer. The Silicon Alley Insider reports that there were four bidders: Oppel and Minneapolis StarTribune Publisher Chris Harte's group as well as Hicks Holdings, ZelnickMedia, and Platinum.)

Unlike the Statesman, by all accounts the Union-Tribune's ownership was desperate to sell. In one of those old newspaper sagas, ne'er-do-well David Copley inherited the company when mommy Helen Copley passed away in 2004, and he's been fanatically selling assets ever since. Earlier this year, the Union-Tribune's general manager reported the paper's advertising revenue had dropped 40% in the last two years.

In others words, the Union-Tribune was a classic target for Platinum, a catchall equity firm specializing in companies in "transitioning or declining or distressed" markets. "We tend to be a little bit contrarian," Barnhill said. "As others are moving away from distressed or troubled business sectors, we tend to move toward them." (Or, as he put it to another reporter, "If other folks are running out of a burning building, we're running into it.")

Barnhill, a former public-relations executive and city editor of the Los Angeles Daily News, wouldn't address what, exactly, the firm likes about newspapers. When the right "business characteristics" are in place, he said, the firm believes it can "create value and assist the management team in increasing the value of a newspaper property in the same way we've done in a number of other industries."

Platinum, which has bought everything from a composite material manufacturer to a crane rental company, was founded in 1995 by Tom Gores, who recently made Forbes magazine's list of billionaires, one of the youngest members of the club. Although many of Platinum's companies are fairly dry, Gores has dabbled in Hollywood and even made the gossip columns, during the wiretapping case of famed Hollywood private eye Anthony Pellicano, when it emerged Gores was having an affair with his brother's wife.

Platinum is known to be working with David Black, head of Black Press, a Canadian news­paper company that owns more than 170 papers, primarily community newspapers (and the Statesman's community newspapers may be one of its appealing attributes). When Black (no relation to scandal-ridden Canada newspaper scion Conrad Black) took over the Akron Beacon Journal and the Honolulu Star-Bulletin a few years ago, one of his first acts was to slice newsroom staffs by about 20%. "It is all about local, local, local," he told the Seattle Weekly last year in a rare interview.

While it's probably not quite accurate to refer to it as a vulture fund, Platinum looks for companies seen as cheap that benefit from what Barnhill calls Platinum's "operational focus and discipline." Typically, for equity firms like Platinum, that means slashing costs (i.e., jettisoning employees) and selling off assets.

If nothing else, Platinum's interest in the newspaper industry suggests papers are officially at a tantalizing level of "distress" for gambling private funds, which like to buy what no one else will buy. And newspapers are growing more distressed by the day. In March the 146-year-old Seattle Post-Intelligencer shut down its print edition. And last week the Newspaper Association of America released data showing newspaper ad sales dropped $7.5 billion, or 16.6%, in 2008. Internet revenues, which newspaper companies are counting on to stem the tide, actually declined 1.8% for the year.

What Did you Read Today?

KVUE stalwart anchor Olga Campos has been moved to the mornings, replacing the disappeared Jason Hill. Once dominant in the morning, the ABC affiliate's ratings have been slipping. Campos gets to reacquaint herself with caffeine, and KVUE gets to eliminate another position, one of four that disappeared in the latest round of mandated cuts from Belo Corp. Employees also lost their 401(k) matching plan, and managers saw their salaries cut by 5%... Brian Benschoter is out as general manager of News 8 Austin, Time Warner's 24-hour local news channel... Former KEYE reporter Keith Elkins is now the executive director of the Freedom of Information Foundation of Texas... A new report from Scar­bor­ough Research takes a chink out of Austin's rep as a well-read city. Only 67% of Austin adults read a newspaper either in print or online in a week, in contrast to a national average of 75%, according to the firm's analysis of the "integrated newspaper audience." Cleveland, Pittsburgh, and Roches­ter, N.Y., are bubbling cabals of news junkies, with more than 85% newspaper readership.