SBOE: Out With the Old Weaknesses, In With the New 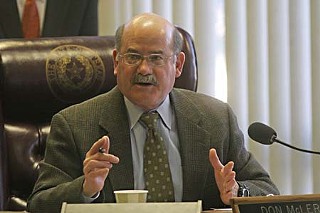 "The State Board of Education pretty much slammed the door on 'strengths and weaknesses' but then went around and opened all the windows in the house." So said Dan Quinn of the Texas Freedom Network to The New York Times last week.

That's his way of saying that science had a mixed day at the March meeting of the SBOE. TFN and other pro-science groups won a major victory against creationists when the 15-member board voted on science curricula in Texas public schools for the next 10 years, but several other amendments may have set teachers back on other fronts.

The major win, and the center of the fight: Last year, an SBOE-appointed panel of educators and scientists drafted new language for the Texas Essential Knowledge and Skills standards that removed a requirement that kids be taught the "strengths and weaknesses" of scientific theories – in part because creationists, in recent years, had seized upon those words to push creationism into classrooms and plant doubt about evolution. The creationist wing of the board fought to keep "strengths and weaknesses" in the TEKS, but in Friday's final vote, the language was rejected on a 7-7 vote, with Corpus Christi's Mary Helen Berlanga absent. Predictably, Austin's two reps on the board – Ken Mercer of San Antonio and Cynthia Dunbar of Rich­mond – voted in favor of keeping "strengths and weaknesses."

Before science advocates had time to celebrate, an onslaught of other amendments began:

• Terri Leo of Spring got an amendment passed requiring teachers to "analyze and evaluate the evidence regarding formation of simple organic molecules and their organization into long complex molecules having information such as the DNA molecule for self-replicating life."

• Board Chair Don McLeroy of College Sta­tion had an amendment passed, on Thurs­day's first reading, requiring discussion of the "sufficiency or insufficiency of natural selection to explain the complexity of the cell" – really, another way of saying "strengths and weaknesses" – but the board stripped it back out on the final vote. Then pro-science Repub­lic­an Bob Craig of Lubbock offered a perhaps unwise compromise amendment to "analyze and evaluate scientific explanations concerning the complexity of the cell," which passed 13-2.

• A similar McLeroy motion to study the "sufficiency or insufficiency" of theories of common descent, which passed in January, was stripped on Friday's final vote.

• Barbara Cargill of The Woodlands wanted differing "theories" on the age of the universe taught – obviously, a challenge to the widely accepted Big Bang Theory – and the motion passed 11-3.

• Another peace offering from Craig, which would require "all sides" of scientific explanations be taught, passed 13-2.

• Dunbar succeeded in passing, 13-2, an amendment to "analyze and evaluate scientific explanations concerning any data on sudden appearance and stasis and the sequential groups in the fossil record." "Stasis" is one of the many pseudoscientific challenges that creationists often make to evolution.

And thus ended yet another round of the arrogant fundamentalist wing of the SBOE challenging the world's foremost scientists on their knowledge of science. A quote from McLeroy during the evolution debate summed it all up: "I disagree with all these experts. Somebody has to stand up to these experts."

Other SBOE news: During the meeting, the House Public Education Committee voted to put the board under Sunset Review, meaning it will have to justify its existence every 12 years, as do most other state agencies. And on Monday, the House passed Austin Rep. Donna Howard's bill to have video webcasts of the meetings, rather than just the audio currently offered (see "LegeLines").